Chris Hipkins has declared it’s about time New Zealand had a “ginger on top” as he first appeared before the media as Jacinda Ardern’s successor.

The new Labor leader admitted he doesn’t have the best “fashion sense in Parliament” after being asked how he would describe himself.

“I would say the people making these comments aren’t standing in front of mirrors,” he joked during a news conference in Wellington on Saturday.

Mr Hipkins said he initially missed a call from Anthony Albanese but then confirmed he had spoken to the Australian Prime Minister and also to Ms Ardern.

“I had a chat with Anthony Albanese, it’s great to be able to talk to him, I hope to meet him in person soon,” he said.

“This is clearly a very important relationship for New Zealand.”

He also defended his handling of the Covid pandemic as the nation’s then-minister in charge, saying there were “of course” some things he would have done differently had he had time again.

Ms Ardern announced her shock resignation during an emotional press conference on Thursday, citing exhaustion after five and a half years on the job. 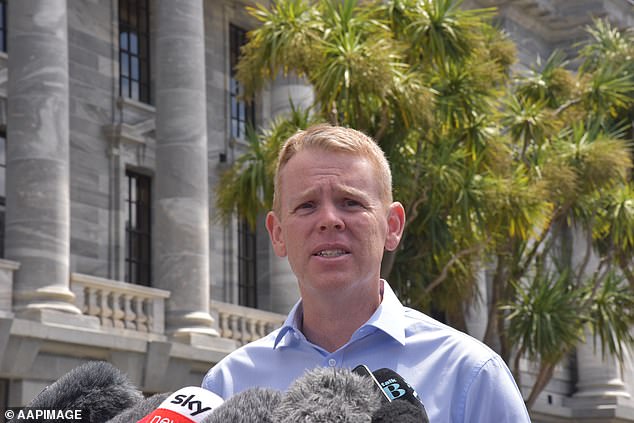 Her surprise departure – only known to her party hall hours beforehand – sent Labor MPs racing to find a replacement as party leader and prime minister.

Mr Hipkins, a trusted ally of Ms Ardern, emerged as the consensus candidate and was the only candidate for the role in a hastily called leadership election.

He told the media he enjoys cycling, gardening and DIY.

The new prime minister agreed with a reporter’s allegation of elevated levels of “vitriol” in Kiwi politics and said Ms Ardern had suffered from “absolutely intolerable and unacceptable behaviour”.

Senior MPs remained tense as they held talks in Napier, where they had traveled to for the party retreat at the start of the year, and back in Wellington on Friday.

No MP signaled their intention to take office before the nomination deadline at 9am on Saturday, staying true to a pact to keep the discussions internal.

Shortly after that deadline, party leader Duncan Webb briefed MPs on the only candidate: Mr Hipkins.

The 44-year-old will be confirmed as party leader at a caucus on Sunday, confirming his rise to the top post in Kiwi politics.

The Remutaka MP is a popular MP known for his sense of humor and delight in sausage rolls.

A Labor lifer, he volunteered for the party at a young age, became president of his student union and entered Parliament in 2008 in the same line-up as Mrs Ardern.

Jacinda Ardern announced her shock resignation as New Zealand Prime Minister on Thursday, citing exhaustion after five and a half years in office

Mr Hipkins is a trusted political ally of Ms Ardern and has been entrusted with tough jobs – such as Covid-19 minister and police minister – when safe hands were needed.

The two are close friends and take their young children to playdates outside of Parliament.

Mr. Hipkins is also a political warrior with an enthusiasm for scoring that has seen him overshoot the mark.

His most notable episode for Australians came in 2017 when he used Parliament to seek information on Barnaby Joyce’s dual citizenship status, criticizing then-Australian Foreign Secretary Julie Bishop and Ms Ardern in a rare trans-Tasman dispute.

This week, Mr Hipkins was quickly seen by Labor MPs as their best bet to succeed Ms Ardern, particularly given Deputy Prime Minister Grant Robertson’s decision to exclude himself from the contest.

The 44-hour process allowed neither grassroots Labor members nor the Kiwi public a say in the election of the prime minister.

Both Mr Hipkins and Ms Ardern argued that this was crucial to allow stability in government.

“The most important thing is that we focus on a fast-track process that will ensure the team has been able to quickly refocus on issues that are important to New Zealand,” said Ms. Ardern.

While the public was not involved in the process, Mr. Hipkins appears to be the most popular choice.

A multitude of polls by New Zealand media and polling agencies confirmed that he was the most popular Labor MP to follow in Ms Ardern’s footsteps.

Local media are also reporting that Labor MPs may reconsider her role as vice-chairman, currently held by Kelvin Davis.

Kiritapu Allan and Carmel Sepuloni have been discussed as possible leadership partners for Mr Hipkins, who is likely to be sworn in as prime minister next week.

Ms Ardern will leave Parliament entirely by April, ahead of the October 14 national election.

Mr Hipkins, a trusted ally of Ms Ardern, emerged as the consensus candidate and was the only candidate for the role in a hastily called leadership election

Who is Chris Hipkins, New Zealand’s next Prime Minister?

Chris Hipkins was the sole candidate for the Labor leadership vacated by Jacinda Ardern and will become New Zealand’s 41st Prime Minister.

* Joined Parliament in 2008 with Ms Ardern

* MP for Remutaka, in Upper Hutt, the downtrodden northern suburbs of Wellington where he grew up

* Studied Politics and Criminology at Victoria University of Wellington, where he was Student President

* Has two children, a six-year-old son and a four-year-old daughter

Andy Murray vs Roberto Bautista Agut LIVE: The Scot is looking to reach the fourth round

Will Octopath Traveler 2 release on Xbox?