New York Magazine is deleting and reposting Meghan Markle’s tweet to add the Duchess of Sussex’s title, despite the publication saying she has “left the company.”

The glossy publication went out of its way to mention her title – Duchess of Sussex – in a tweet on Monday after deleting a post that only mentioned her by name, according to the Daily Star.

According to the Daily Star, it was deleted and replaced with a tweet that read: “Presentation from our fall fashion issue cover star: Meghan, the Duchess of Sussex.” 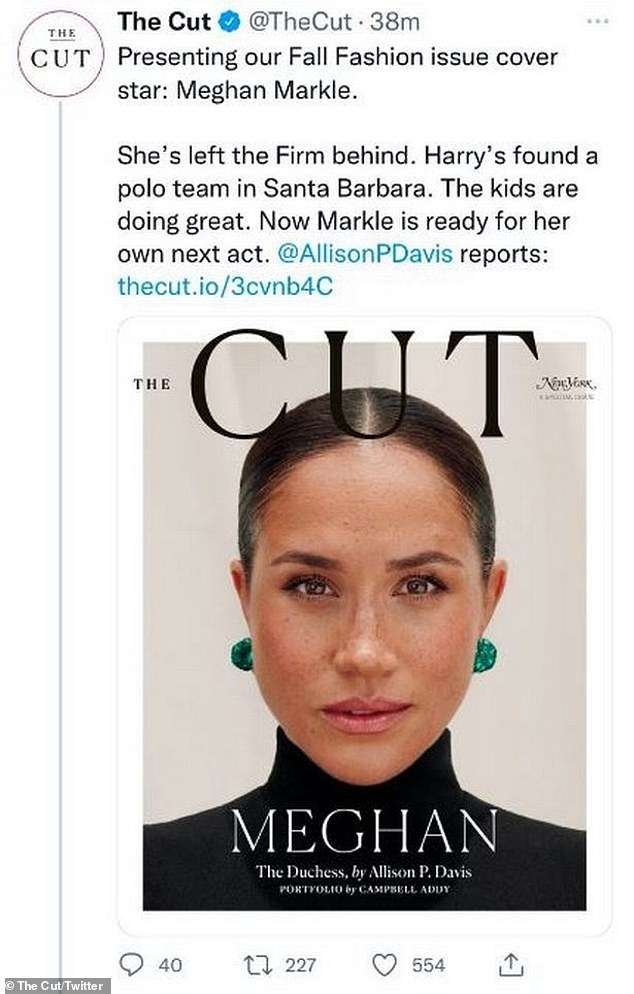 Both posts admitted that she has severed ties with the British royal family, sometimes derisively referred to as “The Firm”.

“She left the company. Harry found a polo team in Santa Barbara. The kids are doing great,” the pitch said.

Meghan Markle, Duchess of Sussex, shows off the California home she shares with Prince Harry and their two children

Below the text is the front cover with a photo of Markle in a black turtleneck, commemorating the photo of Harry’s late mother, Lady Diana Spencer, who wore the cover of Michael O’Mara’s photo book.

In the interview, Markle professes her independence from the monarchy, cheekily telling the magazine, “Do you want to know a secret? I’ll be back… on Instagram.”

She claimed that while living as a royal, she was confined to a pre-existing account @KensingtonRoyal, to which she was given permission to post.

The Duke and Duchess of Sussex with Archie and Lilibet in a Christmas card published on December 23, 2021

Before marrying Harry, she had her own account with 3 million followers, according to New York Magazine.

“It’s a big adjustment — a huge adjustment to go from that kind of autonomy to a different life,” says Markle.

It’s unclear why the magazine is spreading the seemingly contradictory message of the actress and lifestyle brand Pitchwoman’s independence from, and affiliation with, the royal family.

A request to New York Magazine was not immediately answered.

In March 2020, Prince Harry, Duke of Sussex and Markle announced they were “stepping back” from their roles as “senior members” of the royal family.

DAN WOOTTON: Meghan's latest tirade against the royal family and Britain should be the final straw for Harry