Eddie Howe complained on Friday that rival clubs are targeting Newcastle. After that draw against Crystal Palace, he might think the officials are working against his side as well.

Howe’s criticism before the game was that other top-flight teams have inflated transfer fees for the Magpies since their takeover by Saudi Arabia. “No one is willing to do us any favours,” groaned the Newcastle manager.

Well, referee Michael Salisbury wasn’t in the mood to hand Howe a handout here either, as he controversially ticked off Tyrick Mitchell’s own goal in the second half to deny the hosts a deserved win. 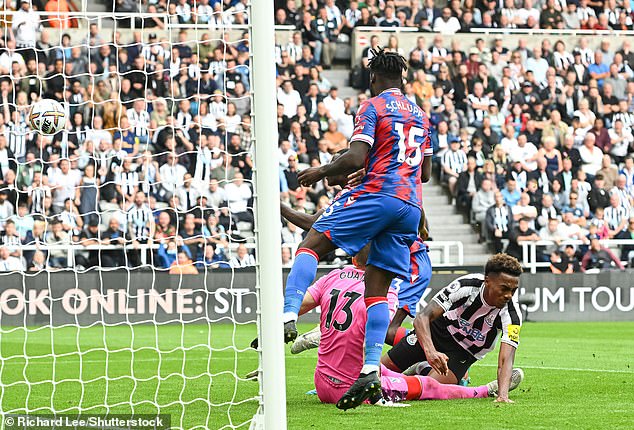 Salisbury disallowed the goal after consulting his monitor on the sidelines, ruling Newcastle winger Joe Willock knocked goalkeeper Vicente Guaita to the ground after Sven Botman headed a long free-kick over the goal.

What he didn’t notice – or ignore – was that Willock was thrown off balance by a nudge from Mitchell, who then fired the ball wide.

The decision, combined with some good saves from Guaita, meant the 11th-placed Magpies had to settle for a fourth draw of the season, with their only win of the opening weekend coming against Nottingham Forest.

But it was the second time in four days that Howe was outraged by officials after Liverpool scored a winner against them in the 98th minute on Wednesday night, when just five minutes of added time had been wasted.

Newcastle club record £60m Alexander Isak scored on his debut at Anfield that night. And he was greeted for his first game at St James’ Park by fans who waved a giant flag with his name and number on it.

But the Swedish striker was unable to concede to the fans despite a golden chance in the 16th minute.

Isak had a clear run on goal after knocking down a careless Joachim Andersen in his own half. But the calm he displayed in the penalty area at Anfield deserted him as he reached Guaita and attempted to throw the ball over the Palace keeper, who stood upright to parry his disappointing attempt.

If anything, that miss spurred Newcastle on as they spent the rest of the first half knocking on the visitors’ door.

After Sean Longstaff saw his header from a corner saved by Guaita, Cheick Doucoure cleared the line as Joelinton tried to pool the rebound, then Botman’s follow-up shot was blocked by Marc Guehi.

Next up was Miguel Almiron, whose shot deflected off the edge of the box and hit the post.

Then Isak had another chance to open the scoring before the end of half-time, but Guaita tamed after Almiron released him on the edge of the box.

Palace’s only real chance of the first half came from Jean-Philippe Mateta, whose twist and shot was conveniently saved by Nick Pope.

But if they were lucky enough to go straight into the break, they were even luckier six minutes into the second half when that goal against them was disallowed.

Patrick Vieira immediately complained to the fourth official that Guaita had been knocked out by Willock and referee Salisbury agreed after looking at his pitchside monitor after a lengthy VAR check.

However, home fans were furious when the big screen showed a replay of the incident and they discovered what Salisbury had missed.

Still, the hosts pushed forward and Almiron volleyed past a Longstaff dinked ball.

But Palace were starting to show a little promise themselves and substitute Odsonne Edouard was rejected by Pope’s knee after getting his shot in the box.

Then it was Guaita’s turn again to keep Newcastle at bay, brilliantly reaching out a hand to parry Willock’s close-range shot after Isak’s through ball.

Willock then missed another chance after a melee in the box and despite a few more later scramblings, Palace somehow held on.

GMB presenter Noel Phillips 'shattered' after being 'attacked, racially assaulted and spat on' in London