Jonjo Shelvey is on the verge of joining Dele Alli’s nightmare in Turkey – as the Newcastle midfielder ‘close to a shock move to Besiktas’ after an injury-prone season at Tyneside.

The 30-year-old is currently out of action with a calf injury and has fallen down the pecking order at Newcastle, raising serious doubts about his future.

A move to Turkey would see Shelvey join forces with Everton loanee Dele Alli – who is having a nightmare at Besiktas. 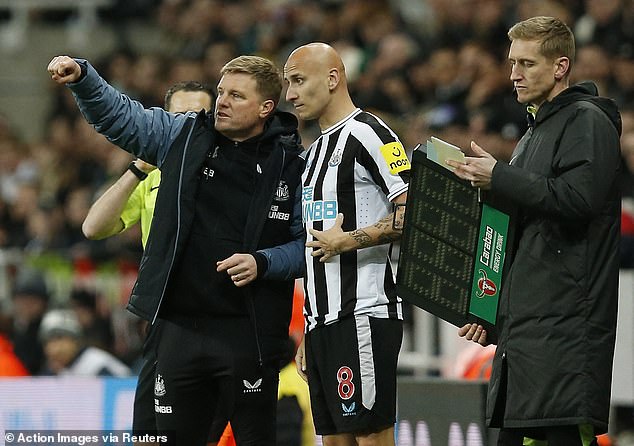 A move to Turkey would see Shelvey join the struggling Dele Alli, who is having a nightmare at Besiktas

According to Spor Arena, Besiktas is in talks with Newcastle and Shelvey over a potential move from St James’ Park.

Talks are understood to have been positive despite the midfielder being out injured until late February or March.

There has been much speculation about Shelvey’s future at Newcastle and with the Magpies continuing to spend heavily, the 30-year-old, out of contract in the summer, could decide to leave to find minutes elsewhere.

If Shelvey joins Besiktas, he will hope it goes better than Alli’s time in Turkey.

It was a miserable time for the former Tottenham star as Alli struggled to impress despite the fanfare that greeted his arrival and only made 10 appearances for the club.

Besiktas is reportedly looking to send Alli back to Everton due to his struggles – but a return seems unlikely as there is no rest clause in his loan deal.

The Turkish giants hope Shelvey will have a more positive impact should he decide to leave St James’ Park.

Leicester’s Youri Tielemans has been a long-time target and remains of interest, but younger names are also in the frame.

France Under-21 midfielders Khéphren Thuram from Nice and Kouadio Koné from Borussia Mönchengladbach – both 21 – have received enthusiastic reports from Newcastle’s scouting department. Chelsea are also keen on this pair.