Newcastle are sweating over the availability of Alexander Isak, who has been signed for £60m to join Liverpool midweek

By Craig Hope for MailOnline

Newcastle United could have to wait until 75 minutes before kick-off in Liverpool on Wednesday night to find out if record signing Alexander Isak has a work permit to play.

The Sweden striker, who joined from Real Sociedad for £60million last week, was forced to sit in the stands during Sunday’s 1-1 draw at Wolves because his Home Office paperwork had not arrived.

That remains the case as of Tuesday morning but Eddie Howe is hopeful Isak will be available at Anfield, especially as Bruno Guimaraes, Callum Wilson and Allan Saint-Maximin are all recovering from hamstring injuries. 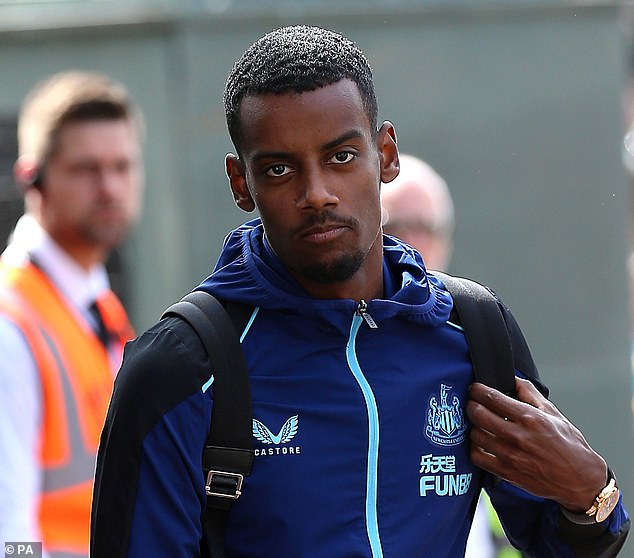 “We still don’t know[if the work permit is coming],” Howe said. “I really hope so. It would be great to see him involved for us, but we’re still in other people’s hands. We’re desperately hoping it gets done before the game, but sitting here there’s no guarantee.

“I think (the cut-off point) is 75 minutes before kick-off, so it could go all the way to the end. We’ll wait and see.’

Isak has been training with his team-mates in recent days – it’s believed he doesn’t need a work permit for that – and Howe said: “We’ve had minimal training with him between games but what he’s done he’s done very well. He looked bright and sharp, but we’ve only seen him in flashes. I’m excited about him.”

Isak (second row, third from left) had to watch Newcastle’s draw at Wolves from the stands

Howe, meanwhile, confirmed that Brazil midfielder Bruno felt his hamstring in the final stages of the midweek win at Tranmere’s Carabao Cup after being tricked into possibly taking a penalty. He will miss the next two games.

Saint-Maximin has identified a similar issue at Molineux and is concerned about the trip to Merseyside while Wilson is sidelined for at least another 10 days.

The injuries are unlikely to force Newcastle to take any drastic action in the transfer market – they have spent £115million this summer – and Howe said: “I’m not expecting (significant deal) to be honest. We are very happy with the deal we did.

“We believe the injuries we have are short-term. So there might be some pain in the squad in the short term, but in the longer term I think we’re very strong. That’s not to say we’re completely closed, we’re still looking.”

Loan deals are the most likely route and one player making the move is goalkeeper Martin Dubravka.

The Slovakian will join Manchester United in a loan deal with a £6million purchase option that will become mandatory once certain criteria are met.

But Howe said: “Talks have taken place between the clubs. I don’t think anything is complete as I sit here. From my point of view I’m sad when Martin leaves, sad to see him go.

“It’s certainly not something we really wanted as a football club, but we understand that there are always two sides to every story.”