Dallas Cowboys owner Jerry Jones has admitted that while he has faith in Tyler Smith from the 2022 first round, he expects the team to pay “some price” for the rookie’s start.

Dallas drafted Smith No. 24 overall from Tulsa and he had originally struggled to be the Cowboy’s starting left guard before transitioning to tackle.

With veteran left tackle Tyron Smith set to miss months of the season through injury, it now appears the rookie will take his place for the foreseeable future. 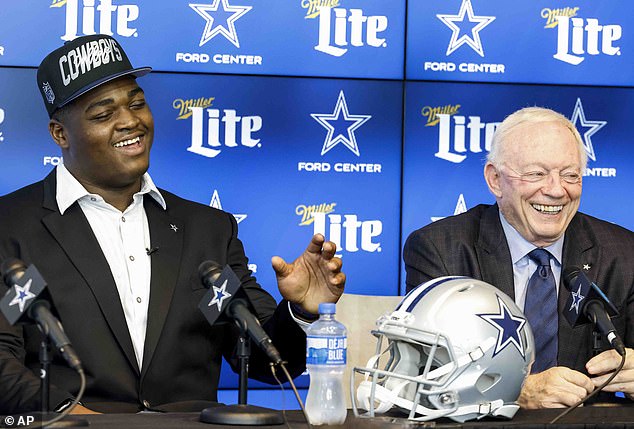 “He’s everything we could have hoped for and even more when we drafted him. That’s what we designed him for, to come in and be the left tackle. So he had a really excellent stock, all things are there. Do I wish we had Tyron? Yes,” Jones continued 105.3 The Dallas Fan.

“Are we getting Tyron back? Probably. But in the meantime, he’s going to come in and get a Harvard PhD in left tackle by then. Will we pay a price for this? Yes. Can we win if he pays a price? I guess so.’

While Dallas is poised to start the season with Smith at left tackle, they have been linked with veteran free agent Jason Peters. They were also reportedly interested in acting against Chuma Edoga, who was recently cleared of waivers by the Atlanta Falcons following his release from the Jets.

Tyron Smith has had surgery, which will put him out at least until December, if not longer

Whether the Cowboys eventually decide to sign Peters or bring in another lineman in general remains to be seen, but for now Jones is optimistic his rookie will get the job done.

“Won’t he get him all the time? Yes. We need someone to help him, we need to keep some off, cut some off offense, you need to cut it out a little and help him. But I think he’ll get his man, I think he’ll do better. I think that’s the nature of the position and the nature of football.