The Dragons finished their season with three straight wins but are not rewarded with the spoils of a Mad Monday celebration as club management cracks down after years of off-field drama.

St. George CEO Ryan Webb told the gaming group that after their Round 25 clash with the Broncos, they’re only allowed to celebrate with family in Kogarah. 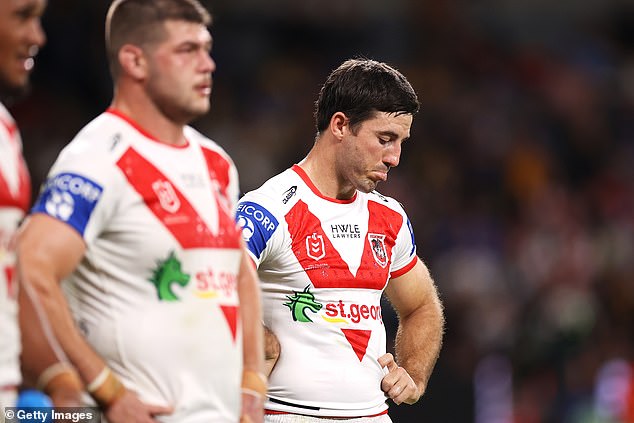 Webb told the Daily Telegraph that the Dragons are no longer entertaining the infamous Mad Monday event after Covid chaos and player scandals swept club headlines.

NRL integrity unit chief Jason King has called the CEOs of the clubs whose players will be let off the leash on Monday, ready for a long off-season after missing the eight.

The Dragons roster is reportedly split over coach Anthony Griffin – with key forwards Jayden Su’A and Blake Lawrie not siding with “Hook”.

St. George CEO Ryan Webb did not want to risk any negative publicity that would come from the club’s Mad Monday celebrations

Captain Ben Hunt is a strong supporter of the former Panthers and Broncos coach and yesterday reiterated his intention to step down with the Red V.

Sea Eagles CEO Tony Mestrov has taken the opposite path to Webb, encouraging his players to band together and come together amid a Pride scandal that has ruined the club’s finals hopes.

The former Greyhound NSW boss said it was important for players to recover from a high-pressure season.

“Jason King called me about what we’re doing and I sent him our plan.

We have a pretty good group of players. I think everyone in rugby league has learned from the past. It’s been a tough year, but you have to find that balance. The players will have a beer and have a good time, then we’ll revert to next season.

Vaughan was reportedly having a quiet barbecue when the police were called.

He was fined $50,000 while other teammates like Zac Lomax, who hid under a bed, were also fined.

The Wests Tigers are already planning their Mad Monday celebrations, taking a cruise in port and continuing to celebrate at a hotel event after their Sunday game against Canberra.

Mad Mondays have garnered quite a bit of media attention in the past, most notably at Belmore in 2012.

The Bulldogs lost 4-14 to Storm in the 2012 Grand Final and players were openly seen urinating on their home court and allegedly berating a journalist who was covering the story.

The club donated $30,000 to a charity as an apology for their bad behavior.

Jason Taylor was sacked as South Sydney manager in 2009 after partying too hard with his players, which ended in a strange scuffle.

Taylor was jokingly fighting his team using kung fu while intoxicated when Rabbitohs player David Fa’alogo returned fire and punched him in the face.

Chris Hemsworth's dad, 67, keeps up with his Thor star during Father's Day practice