The National Oceanic and Atmospheric Administration is facing criticism for failing to see the devastating storms that have hit California and the West Coast.

The organization, which releases seasonal forecasts, predicted back in October that the Golden Stated would have a below-normal amount of precipitation in Southern California.

NOAA also in their winter forecast predicted neither drier, or wetter than normal conditions for Northern California, which encapsulates cities like San Francisco and San Jose.

In reality, the series of atmospheric rivers that have hit the state has done an estimated $1 billion in damage, dumping an estimated 24 trillion gallons of water on the state since December and leaving 19 people dead. 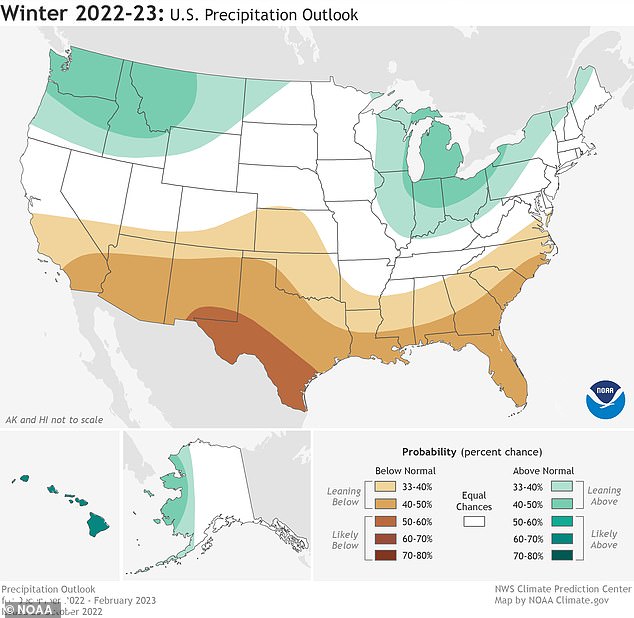 This is the forecast NOAA released in October, showing that much of California would see less rain that normal for the winter months

In reality, the series of atmospheric rivers that have hit the state have done an estimated $1 billion in damage

Many areas of the state saw 200 to 600 percent more rain than normal. In some parts, residents experienced 10 to 20 inches of rain while more than 200 inches of snow fell in certain northern, inland cities.

‘You really can’t rely on the general longer-range forecast for watershed management,’ said one official who works in water resource management.

When NOAA’s Climate Prediction Center released its initial seasonal forecast for the United States in October, the organization said California would be in for nothing unusual.

NOAA said Southern California had a 50 percent chance of having a drier-than-normal season while Central California would be closer to 25 percent.

Northern California was predicted to be normal for the season.

Meanwhile, nearly the entire state would see warmer-than-average temperatures for December through February, the group stated.

Mudslides and flooding have already begun in Montecito, where Prince Harry and Meghan Markle live

A drone view of a tree that fell during a winter storm with high winds in Sacramento, California

Pictured: A vehicle is seen sunken into the mud after the driver, a Santa Barbara Photojournalist, attempted to evacuate from her home

Additionally, NOAA predicted some 90 percent of the state would have drought conditions that continue or worsen, aside from a sliver of the coastal region in Northern California.

CPC often releases forecasts for one to upwards of 13 months out.

The forecasts are intended to ‘help communities prepare for what is likely to come in the months ahead and minimize weather’s impacts on lives and livelihoods.’

The wholly inaccurate forecasts have now been slammed by individuals and organizations reliant upon the information.

One official with the Public Policy Institute of California’s Water Policy Center said the forecasts are unhelpful for groups that have to monitor things like water supply.

‘You have no idea come Dec. 1 what your winter is going to look like because our seasonal forecasts are so bad,’ said Jeffrey Mount, a senior fellow with the organization.  ‘They are just not reliable enough to make definitive water supply decisions,’ Mount said.

‘We plan to be able to manage anything that comes our way,’ said Willie Whittlesey, general manager for the Yuba Water Agency, in an interview with the Washington Post.

‘Even during La Niña, you can have significant storms at the watershed level — you really can’t rely on the general longer-range forecast for watershed management,’ Whittlesey said.

Several people had to be rescued after two vehicles plummeted into a sinkhole in Chatsworth, California

This ‘big rock’ fell directly onto a roadway in Malibu, completely cutting off access to both sides

Even in their November updated winter outlook, NOAA still predicted a 33 to 50 percent chance of below-normal precipitation in the southern half of California.

They still predicted equal chances of precipitation being above or below normal in the northern half of California at that time.

CPC Director David DeWitt said it was the influence of La Niña and El Niño — defined as the warming and cooling cycles of the Pacific Ocean, that influenced the bad outlooks.

‘Forecasting on a seasonal time scale is dominated by the El Niño/La Niña cycle,’ DeWitt told the Post.

‘La Niña conditions are generally characterized or associated with below-normal precipitation for central and Southern California. Northern California is kind of a dice roll,’ the CPC director continued.

A boulder damaged one car on Pacific Coastal Highway in Malibu

It wasn’t until December that the organization caught on to what was to come.

In their January forecast, released in December, CPC predicted a smaller portion of the state expected to see below-normal precipitation from their previous forecast.

On December 19, CPC released its 14-day prediction for California which showed a 33 to 70 percent chance of above-normal precipitation across all of California.

‘Those day eight-to-14 products are really generally going to have much higher skill than a monthly or seasonal outlook because of that shorter time scale,’ DeWitt said.

It was only on December 31 when the rain had already begun in the Golden State that the group suggested the rain would continue for several weeks.

In their initial October forecast, one official with the National Centers for Environmental Prediction explained the importance of NOAA’s forecasts.

‘NOAA’s new supercomputers are enabling us to develop even better, more detailed forecast capabilities, which we’ll be rolling out in the coming years,’ Farrar said.

California saw no relief from drenching rains on Tuesday as roads near Watsonville turned into gushing rivers, forcing evacuation of thousands in towns with histories of deadly mudslides

Pictured: A man runs from the spray of waves hitting and going over the breakwall of Redondo Beach, CA, Harbor, in the wake of a storm that cleared the south bay community of Los Angeles County, Thursday, January 5, 2023

Damage to a jetty is seen in Capitola Wharf on January 6, 2023 in Capitola, California

In the first two weeks of January, more than a dozen Californians were killed in weather-related incidents around the state.

The consistent downpour caused major flooding in Northern areas of the state and sparked evacuation orders and warnings for thousands of residents.

High winds left millions without power, some for days, and the conditions have yet to cease.

Meteorologists are predicting additional storms this week which will bring more rain and snow.

As of Monday, roughly 8 million people are under flood watches through the evening in Central California.

Experts are concerned that rainfall could trigger mudslides and landslides in the already-drenched hilly areas.

A neighborhood off Holohan Road near Watsonville, California was flooded on Monday

One road in the A-Lister town was completely flooded with rainwater (pictured), acting as a river, as residents were ordered to shelter in place

Both lanes of the Glenwood Rd off Highway 17 near Scotts Valley were washed out by heavy rain the previous night. Road crews worked all morning in the Santa Cruz Mountains

Since December 30, more than 400 landslides have been recorded by the California Geological Survey.

‘As we push into the day on Tuesday, we’re looking for quieter weather across much of the state, with one fast-moving additional system arriving for later Wednesday into early Thursday,’ said David Lawrence with the National Weather Service.

The damage is already done for many whose homes and businesses have been destroyed by the devastating conditions.

On Saturday, U.S. President Joe Biden declared a major disaster in the state, offering up federal funds and resources that will be desperately needed to assist with the estimated $1 billion in damage.

What is causing the storms in California?

An emergency has been called in California following more than 10 days of storms across the state, claiming the lives of 14 people.

For more than a week now, the state has been facing the brunt of two overlapping weather systems – atmospheric rivers and bomb cyclones, causing an extreme weather phenomena.

What is an atmospheric river?

The torrential downpours are being spurred on by an atmospheric river – an airborne band of moisture that can stretch 1,000 miles (1,600 kilometers) long and 350 miles (563 kilometers) wide.

The atmospheric river is caused by moisture in the ocean and can move for thousands of miles before its downpour, which can result in severe flooding or landslides.

This particular river is the result of moisture from near Hawaii, formed after warm water evaporated off the Pacific, before it moved to the West Coast.

Once in the air, the river is carried by the wind over mountains before falling as rain or snow.

On Sunday, the National Weather Service warned of a ‘relentless parade of atmospheric rivers’.

The torrential downpours are being spurred on by an atmospheric river – an airborne band of moisture that can stretch 1,000 miles (1,600 kilometres) long and 350 miles (563 kilometres) wide

What are bomb cyclones?

They are caused by a mixture of high and low temperatures, causing a rise and fall in air pressure, resulting in harsh storms and strong winds.

It is called a bomb cyclone as meteorologists have linked the sudden drop in pressure to a bomb going off.

Other terms to describe it include ‘explosive cyclogenesis’ and ‘bombogenesis’.