A non-binary couple who reject “gender indoctrination” revealed they told the doctor when their baby was born to keep quiet about their gender.

Sommer, 37, and her wife Stephanie welcomed their child Juno, who was later assigned at birth, to the world seven months ago and are campaigning for the baby to be “gendered”.

“We just want Juno to have space to figure it out for herself,” Stephanie told SBS Insight on Tuesday’s episode, in which she discussed all aspects of nonbinary parenting. 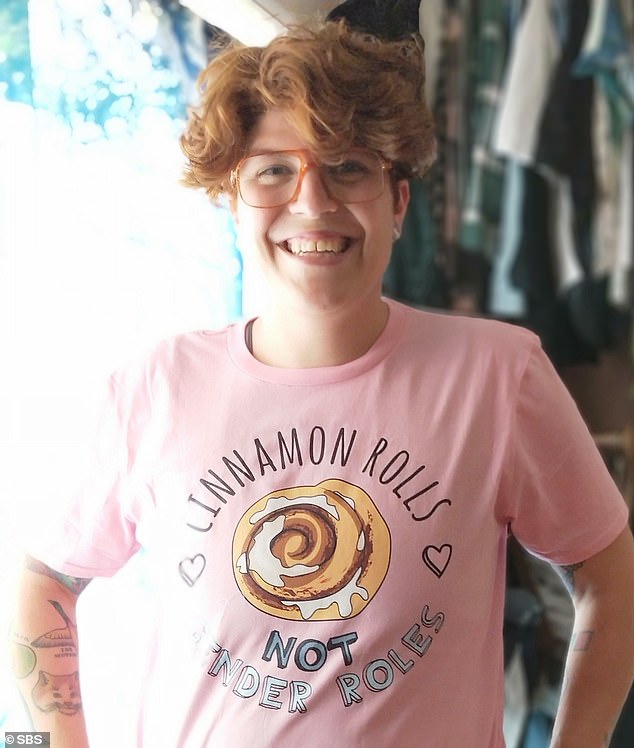 The baby was identified as female at birth, but parents will raise her to be “gender-segregated.” Pictured is an archive image of a baby

However, the lovers admitted that not using more conventional pronouns has its challenges.

“When Juno was born, we were like, ‘We’re not going to tell anyone their gender unless they change their diapers,’ and then we probably found out on the first night how hard that was,” Sommer revealed.

“It was impossible because if someone asks and you refuse to tell them, they feel like you’re attacking them or you’re being rude.”

As part of her parenting style, her baby calls her “PomPom” instead of mom or dad because it’s a neutral term.

“We use the words gender specific rather than gender neutral because I feel like the word neutral makes it seem like she only wears beige and has no color in her life,” Sommer said.

“So we say gendered, where there are no boundaries and no restrictions on how our baby can express themselves, regardless of what gender they were assigned at birth.

Stephanie (pictured on SBS Insight) revealed that when her baby was born, she told the doctor to keep quiet about the sex

WHAT IS GENDER EXPANSIVE

Cross-gender means that a person is not bound by traditional gender roles.

Instead, they live “out of the box” and identify with themselves rather than with a gender identity.

People in this category may or may not identify as their birth gender, but do not abide by the “gender rules” associated with that gender.

“I think people think there’s a lot of pressure involved, but we’re not putting any pressure on her and who she wants to be.”

The couple had originally discussed raising Juno gender neutral but thought they would instead teach her that gender doesn’t define her until she’s old enough to decide what she wants to identify as.

Sommer and Stephanie’s version of gender parenting means that Juno plays with female and male toys, dresses in clothing for each gender, and exhibits positive role models of both genders.

One hurdle the couple recently overcame was finding a daycare center that would include their family.

Sommer said that despite living in an “awake” neighborhood, the couple struggled to find a center that was actually inclusive rather than rainbow-washing to attract more clients.

“We’ve been looking at childcare places lately and we’re always like, ‘Are you inclusive? Do you have any strange books?’ and all that stuff,” said Sommer.

“Many will say they don’t, but we can bring them and that they include everyone.

“But I just don’t think that’s a good enough answer. I want a place my baby can go and doesn’t feel left out.

“We found a rainbow playgroup. So every month they have a rainbow family reunion where all the parents get together.’

Sommer said they also struggled to tell their family about their new gender identity and parenting method.

“They buy Juno all these feminine clothes and call them beautiful,” Sommer said.

Luckily, Sommer said the couple was able to balance the girly gifts with used stuff from Stephanie’s nephew, ensuring Juno still has a variety of clothes to choose from.

Sommer said they began identifying as non-binary two years ago after Stephanie realized they suffered from “gender issues.”

Sommer had her breasts removed to help with dysphoria/dysmorphia, with Stephanie by her side to help them through the process.

She said her puberty was awful because she was constantly uncomfortable with her body and “hated” the way it was changing.

“I felt like I didn’t belong anywhere. I felt like I was just living my life but all these female expectations were being pushed on me,” Sommer told Daily Mail Australia.

“It really depressed me. I went to an all-girls school and I had to wear a dress and I felt like I was wearing a costume.

“I wasn’t myself. I just felt like a madman in a dress. It was a costume I had to put on to go out into the world.’

Sommer, who works as a handyman, says her workplace did everything it could to show acceptance of her identity.

“They were fantastic. They actually had a meeting about my pronouns before I started,” Sommer said.

“They updated my email to include my pronouns even though it’s automated, they figured out how to do it.

“It was a priority and that was really great.”

https://www.dailymail.co.uk/news/article-11160507/Non-binary-parents-Sommer-Stephanie-reveal-told-doctor-not-announce-babys-sex-birth.html?ns_mchannel=rss&ns_campaign=1490&ito=1490 Non-binary parents Sommer and Stephanie reveal they told the doctor not to reveal the baby’s gender at birth