The $24 million sprawling Sydney mansion that was destroyed in a raging fire has taken with it a treasure trove of family memories.

The 5,000-square-foot waterfront property on Cliff Road in Northwood was the Rossi family home until late last year, when it was reluctantly sold, having been purchased by Mary and Theo Rossi in 1961.

The family sold the seven-bedroom Lower North Shore home with a tennis court and boat shed in November for $24 million. 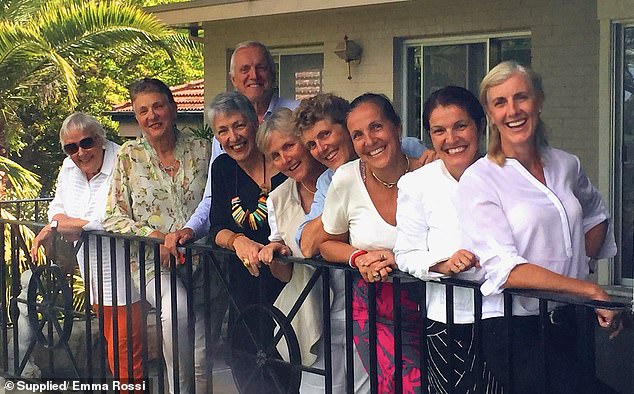 Emma Rossi, second from right, with other family members at the Northwood home that was destroyed by fire

Despite the efforts of two trucks and 50 firefighters, the home was destroyed by a massive fire that broke out around 11pm on Saturday.

Mary, a TV pioneer and travel entrepreneur, lived there until she died in 2021 at the age of 95 after raising 10 children in the home with Theo, who died in 2010.

“It’s funny to see it described in the media as a mansion,” said Emma Rossi, 55, the clan’s ninth-born and communications consultant.

“We never thought of it as a mansion, it was just a home.

“It was a home that you walked into and felt that sense of love the moment you walked through the front door. It was tangible.

Firefighters raced to the burning house around 11pm on Saturday night (pictured).

Mary lived in the house until the end of her life and Emma said she was kept up to date with modern television to entertain her 40 or so grandchildren.

“All the grandkids, including my own, loved going over and spending the night with her eating Maltese and watching Game of Thrones,” Emma told the Daily Mail Australia.

The last big family reunion in the house took place in December, when the purchase contract was finalized.

“We had a very long table on this beautiful porch and the whole family was there,” Emma said.

“There were almost 100 people and we all had to stand up and say a few things.

“It was just hilarious and great fun. It was a very fitting farewell, especially now that we’ve lost the house.’

Emma, ​​who lives just 300 meters away and saw the house burn down, said the family felt the loss.

“We were obviously devastated,” she said.

“The house has so many happy memories for us and for the wider community, our friends.

“It was a place of gathering and represented community, fun and family. It’s a loss, not just for us, but for the community I think.

“It’s a representation of family and what that means. Purpose and happiness and joy and a little cheeky.’

The cheek, Emma said, was all the “unauthorized parties we had when mom and dad were away.”

“There was a lot of that. Don’t tell mom and dad,” she joked.

There were also many authorized assemblies.

“We had a lot of parties. It really was a party house.

“Even at Mom’s wake, we had a nice wake for her at home. We had a rock ‘n’ roll band – the John Field Band, they used to be the Cockroaches, you know the Wiggles. She (Mary) just loved the band.

The Rossi family at the Northwood home in 1967. Photo credit: The Australian Woman’s Weekly

Emma said she was walking the dog when she saw the smoke.

“I came home and took the dog back and ran outside and said to my husband, ‘Oh my God, the family house is on fire,'” she said.

The morning after, Emma said the Rossi family’s WhatsApp group, which has over 100 members, “is kicking off with very fun memories and fond memories.”

One particularly likes to remember how the 10 siblings were called to the table.

“There was a big gong that used to ring for dinner,” Mary said.

It wasn’t all fun and games, however.

It took crews about two hours to extinguish the flames. The house was almost completely destroyed

“My father always loved to lift us up,” Emma said.

“All 10 of us had to get up and go to work in the garden every Saturday morning to do chores.

“There was a lot of work. We weren’t allowed to be lazy and sleep late.’

Emma said the home was also infused with the “sense of public service” of staunch Catholic Mary and Theo.

“It was just embedded in everything we did. So we had a lot of fundraisers in house,” she said.

Mary became the first woman to host a show on Australian television, Women’s World, in 1953.

In 1970 she founded Mary Rossi Travel, which is still active today, specializing in luxury travel to Europe, often visiting places of Christian importance.

Rescue workers said the cause of the fire has yet to be determined, but investigations are ongoing (burning mansion pictured).

He moved into the house at the age of 18 to find housing while studying business at university.

“She used to help me with assignments, she was a very good writer,” said Mr. Wright.

“She used to help all her grandchildren.”

Mary was a speechwriter and author of strategy papers for former NSW Prime Minister Sir Bertram Stevens, a job she quit when asked to make tea.

Mr Wright, who is now a pub manager, said he took on the role of Mary’s carer on the recommendation of a priest and family friend, but it was more a pleasure than a duty.

“She ended up becoming one of my best friends,” he said.

“It never felt like a job to me. In the evenings I cooked dinner, helped her get to bed and helped take care of her.

“It was more caring for a friend than anything else.

“She was an amazing woman. We’ve all had our guilty pleasures and we’ve watched TV shows like Father Brown and Game of Thrones.

Mr. Wright said that besides crime mysteries like those solved by Father Brown, Mary was very interested in matters of the heart.

“She was a hopeless romantic. She always talked about love,” he said, noting that Mary was keen to screen each of his potential partners.

Mr Wright said he was shocked to hear the house had burned down.

“It was an amazing house,” he said.

“There was a very old sandstone balcony.

“She had a great, big library – and the living room, the lounge area, was basically one big open space.

“It had a very old fashioned one of those big wooden tables. And it had a jewel ball, a big, huge one.

“The first layer was the house coming off the road and then sloping down into another little garden section and with the tennis court on the edge – sort of a cliff.

“Below that was another open garden and you would follow it further forward and it would take you down to the boat shed at ground level.

‘There is a lot of sailing in this bay and Mary told me they used to have a big bell and they rang it when the whole family was sailing by.

Mr Wright said the house had a “breathtaking view”.

“The gardens were fantastic too,” he said.

Mr Wright, who left home in 2020, also remembers Mary as a great entertainer.

“She had dinner parties every week and some very interesting people,” said Mr. Wright.

“I’m sure there are many people who have very good memories of the place.

“They are breathtaking memories.”

Authorities are still investigating what caused the fire on Saturday night.

Originally built in 1915 from sandstone, the home sits on an acre of land and features an orchard, boathouse and private basement.

It also had panoramic views of the Lane Cove River, Sydney’s CBD and the Anzac Bridge.