He was Florida’s serial police impersonator, even starting his own mini-police force complete with 18 ‘cruisers’ – and now notorious fake cop and registered sex offender Jeremy Charles DeWitte is set to be released from prison. 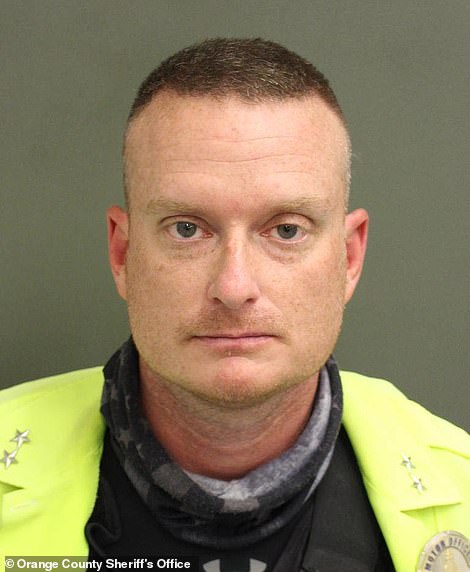 Jeremy Charles DeWitte, 42, will be released from the Taylor County Correctional Institution, in Perry, Florida on September 10

Obsessed with being a law enforcement officer, DeWitte, 42, spent years posing as a cop in Central Florida, where he also recruited fellow cop wannabes to his small force, Metro-State Special Services, that was once described as a ‘cult’.

Members were uniformed like officers – with one later being arrested for packing a real gun – and the unit was replete with 18 realistic black and white cruisers and motorcycles bedecked with flashing lights, air horns and sirens.

DeWitte reportedly once told an investigator that his dream was always to be a law enforcement officer because it was an ego-boost for him to wear the uniform and be respected by the public.

But DeWitte and the men of his now defunct company in the Orlando area, weren’t sworn to fight crime, or to ‘serve and protect.’

In fact, they weren’t sworn to anything at all. Their only job was to routinely escort funeral processions on the highways and byways of the Sunshine State, sometimes referred to as ‘God’s waiting room,’ where funerals are commonplace.

DeWitte, a registered sex offender, spent years impersonating a police officer central Florida before finally landing in the slammer in 2019

The fake cop was so obsessed with being seen as a law enforcement officer he even started his own mini police force called the Metro-State Special Services which had its own fleet of black and white cruisers and motorcycles bedecked with flashing lights, air horns and sirens

Dewitte was sentenced last September to 18 months in prison with credit for 110 days served, as part of a plea deal covering 10 cases against him in Orange County for impersonating an officer and other related charges. Pictured: A Metro-State ‘police’ cruiser

But DeWitte went too far over the yellow line, authorities say.

Video released by the Orange County Sheriff’s Office and shot by DeWitte himself on his own body cam showed him racing and weaving through traffic on his official police-looking BMW motorcycle.

With his siren and air horn blasting, he was seen frighteningly riding at high speed against oncoming traffic, directing traffic at intersections, and berating and cursing motorists, including a woman driver whom he pulled over, with siren blaring – describing her as a ‘dumb white b***h in a blue car.’

Shocked and upset she, like others have done, called 911 to report him, thinking he was a bona fide policeman who had gone wacko.

Investigators confirmed her account from DeWitte’s body camera video, on which he recorded virtually everything as evidenced by the dozens of videos of his antics that have been uploaded to YouTube and viewed by millions, and even secured him a gig on the Dr. Phil show.

In one video, DeWitte is seen challenging a male driver of a black Porsche convertible.

In another instance, a male driver who wasn’t convinced by DeWitte’s cop act accused him of ‘pretending you’re a police officer.’

‘What the f**k does it look like I’m doing motherf**ker,’ roared the infuriated DeWitte, who often packed a replica Glock mace-pepper spray gun in a holster for protection and a pair of handcuffs even though he had no authority to make an arrest.

‘Get the f**k over before you find out.’

DeWitte once inadvertently confronted an off-duty Orange County sheriff’s deputy who was driving with his wife and four-year-old child.

According to the deputy’s affidavit, DeWitte had been driving a Chevrolet Tahoe with flashing amber and purple strobe lights.

DeWitte and the men of his now defunct company in the Orlando area, weren’t sworn to fight crime, or to ‘serve and protect’ and in reality had no real authority

DeWitte, who is married and has a child, lost his chance to become a real cop after he was convicted on charges of ‘lewd lascivious battery sex’ in 2005 and forced to register as a sex offender

After he exited the SUV and began directing traffic, he ordered the deputy to get out of the funeral line that DeWitte was overseeing.

With both hands, DeWitte then slammed the deputy’s front fender and ‘in a threatening manner’ put his right hand on his gun holster.

The deputy identified himself and told DeWitte he was breaking the law.

‘It doesn’t matter. Get out of my escort motherf**ker boy,’ DeWitte instructed.

The deputy called 911 and drove off, but soon realized he was being followed by several of DeWitte’s mock police vehicles.

Subsequently, one of the drivers was arrested for carrying a genuine 9mm gun in a holster on his gun belt, according to authorities.

To end his reign of highway terror, Dewitte was sentenced last September to 18 months in prison with credit for 110 days served, as part of a plea deal covering 10 cases against him in Orange County for impersonating an officer and other related charges.

After his scheduled release on September 10 from the Taylor County Correctional Institution, in Perry, Florida, the former faux cop will face four years of supervised probation, be required to wear an ankle monitor, and he will have his driver’s license suspended for six months from the time of his release.

Under the plea agreement, he cannot possess guns or any other equipment that rings of law enforcement, including vehicles, and uniforms.

DeWitte’s pretend police activity goes back two decades to 2003 when he first served a year of prison time for impersonating an officer, according to reports.

But he claims all the charges against him have been a set up, that he’s innocent of cop impersonation, and of fooling scores of innocent motorists, and placing the public in jeopardy.

Investigators were able to confirm allegations that DeWitte (seen during his arrest in March 2021) had been posing as a cop through his own body camera video, on which he recorded virtually dozens of videos of his antics

DeWitte denied fooling scores of innocent motorists and placing the public in jeopardy. He is seen sporting a yellow polo shirt with a police-type badge

As sheriff’s deputies were arresting the handcuffed DeWitte in 2018, he told WFTV-Channel 9, that he was being targeted by the police and harassed.

‘We do only funeral escorts,’ he yelled – and these guys…have been harassing us.

‘Only funeral escorts of dead family members and women and children that need our help.’

The study noted that police impersonation crimes ‘can shake the public’s confidence in law enforcement, particularly if victims believe that the event was a ‘legitimate’ police action undertaken by a corrupt cop…’

DeWitte, who is married and has a child, apparently lost his chance to become a real cop because of another serious legal tangle he has long faced.

In 2005, when he was 25, he was convicted on charges of ‘lewd lascivious battery sex, involving a victim between the ages of 12 and 15,’ and was sentenced to a year in state prison, according to the Florida Department of Law Enforcement.

Twice since February 2019, he has failed to register as a sex offender, a felony, the records show.

Corporal John Ramsey of the Orange County, Florida, Sheriff’s office, testified under oath in court in 2019 that he first encountered DeWitte posing as an officer in 2014.

DeWitte’s pretend police activity goes back two decades to 2003 when he first served a year of prison time for impersonating an officer, according to reports

At the time, DeWitte appeared much like a genuine motorcycle cop, sporting black high boots, a tight-fitting police-style uniform with badges – one that closely resembled the kind worn by LAPD cops – a white helmet, and with his BMW motorcycle’s ‘lights and horns going off,’ while he was escorting a funeral.

DeWitte was given a few tickets, but behind the scenes officials decided to open a broader investigation – ‘a small task force’ was formed, Ramsey stated – into the activities of DeWitte and his company.

Ramsey testified that in 2015 he confronted DeWitte who was then actively under investigation for ‘impersonating a police officer’ and, also concerned about public safety, had a long conversation with him.

‘And during that time I explained to him what he should and should not be doing and how he was violating the law.

‘I told him he could not be directing traffic, getting off his motorcycle, standing in intersections, telling people what they could or not do.

‘It was quite a long conversation,’ testified Ramsey, who said his talk did no good and the situation involving DeWitte and his escorts ‘got progressively worse.

‘We’ve had multiple incidents where he’s had traffic accidents, where he has stopped people, pulled people over, beat on their cars, screamed at them, walked up to the vehicle with his hand on a weapon that he wears on his side like a duty belt you would see on a law enforcement officer in such a threatening manner that some of the charges he’s facing is exactly for that.’

Before DeWitte made his plea deal and went off to prison, he decided to try to prove his innocence. He did this by making an appearance on the Dr. Phil show – and taking a polygraph test, with his attorney, Amir Ladan, present.

Ladan did not respond to a detailed message left for him by Daily Mail about his client’s case.

‘He says he’s been falsely portrayed in the media and victimized in his community and wants to clear his name, and he has even asked for a polygraph test,’ said Dr.Phil in introducing DeWitte to his audience.

‘Bottom line, he’s facing felony charges and if convicted could spend up to 85 years in prison. So there is a lot at stake here.’

But just like making all those body cam videos of himself on the job that came back to bite him, DeWitte’s decision to spend time with the good Dr. Phil, on national television, turned out to be a big mistake.

The lie detector test was conducted by, according to Dr. Phil, ‘world renowned’ polygraph expert Gil Witte, who was president of the California Association of Polygraph Examiners.

Three questions were posed to DeWitte.

Asked if he ‘knowingly misused his funeral escort rights to appear as someone empowered by law enforcement,’ DeWitte answered, ‘no.’

Asked if he ‘falsely’ presented himself ‘to a citizen as someone empowered by law enforcement,’ DeWitte answered, ‘no.’

And finally asked if during the course of his [funeral escort] duties, had he ‘knowingly used authority exclusively given to law enforcement officers,’ DeWitte once again responded, ‘no.’

The polygraph expert’s opinion was that Jeremy Charles DeWitte ‘was being deceptive.’

DeWitte, who had volunteered to take the test, had failed.

Still, DeWitte declared, ‘I know I wasn’t lying. I know I’m not being deceptive.’

Not long after he went off to serve his prison term, and is now set for release.

https://www.dailymail.co.uk/news/article-11169531/Notorious-police-impersonator-set-released-prison-Florida.html?ns_mchannel=rss&ns_campaign=1490&ito=1490 Notorious police impersonator is set to be released from prison in Florida

Scottish aristocrat Lord Strathnaver, 40, is found dead at the base of a 30ft cliff near Thurso Castle