The YouTuber was even jailed in 2015 for running amok at the National Portrait Gallery during a fake raid in which a witness passed out over fears it was a terrorist attack weeks after the Tunisian beach shooting.

Last night, unlike his usual pitch and stage invasions, Gravesend YouTuber managed to sneak a phone to a BBC set and blared sexual noise as a ringtone while Gary Lineker spoke to millions watching at home.

Jarvis’ latest prank has sparked a BBC investigation because the Match of the Day set should have been safe. He has also disrupted several sporting events including the NFL, international rugby, cricket, diving and recently a Real Madrid game.

He first came to public attention when he pissed off the crowd at the London Aquatics Center with a dive in 2015. 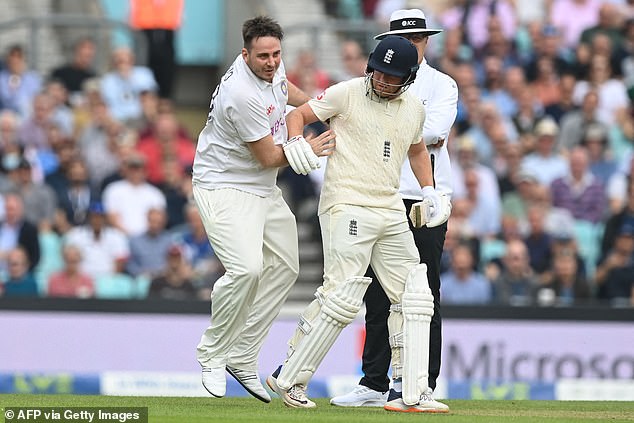 The YouTuber was in Croydon Magistrates Court and found guilty of aggravated trespassing. He was convicted last year and banned from the stadium an hour before and after

He was jailed with three others for a fake robbery at the National Portrait Gallery, leaving visitors terrified

They booed Jarvis after he disrupted the FINA Diving World Series that Tom Daley was attending by jumping off a 10m board. He had rushed past a guard and ripped his clothes off as he climbed the steps to the board.

That same year, then 27-year-old Jarvis and 20-year-old Endrit Ferizolli, 29-year-old Ebenezer Menzah and 23-year-old Helder Gomes were sentenced to a total of 72 weeks in prison after pleading guilty to two counts because they engaged in threatening behavior and incited fear of unlawful violence.

They staged a fake art heist that set off a chaotic stampede at the National Gallery and ran around with tights over their heads, clutching art.

Visitors fled as they sped through the popular tourist hotspot, leaving some trampled while a woman passed out.

The incident came shortly after the Tunisian beach massacre, and judges warned the men – who dubbed themselves “troll station” – that their “distorted” stunts could claim lives in the panic.

A year later, X Factor contestant Honey G was left shaken after Jarvis and three friends stormed the stage and attempted to steal her trademark hat and sunglasses.

Simon Cowell looked terrified as the camera quickly cut away from the stage as one of the men grabbed Honey and tried to wrestle the microphone away.

In October 2021, Jarvis had to be escorted off the field at Cardiff’s Principality Stadium after invading the pitch and lining up alongside New Zealand’s rugby stars ahead of the Wales clash.

It was his fifth stunt of the year as it came at Tottenham Hotspur Stadium following the three cricket invasions and a stoppage of an NFL game.

In September 2021, he was first accused of attacking England cricket star Jonny Bairstow after he sprinted onto the pitch in a full England kit and tried to bowl – crashing into Bairstow in the process.

Jarvis is escorted off the field by security and a member of the United States backroom staff after stopping play during the international friendly match between Saudi Arabia and the United States at Estadio Nueva Condomina September 27, 2022 in Murcia, Spain.

Daniel Jarvis, known as Jarvo 69, is confronted by Jacksonville Jaguars’ Logan Cooke (left) as he invades the field during the game forming part of the NFL London Games at Tottenham Hotspur Stadium on Sunday October 17, 2021

Jarvo, in a mask, joins the New Zealand team to sing the anthems ahead of the Autumn international match between Wales and New Zealand on October 30, 2021 at the Principality Stadium

Jarvis is led off the field after claiming he had no intention of disrupting the September 3, 2021 test game

He was eventually prosecuted for aggravated trespassing after the assault case was dropped. Jarvis defended himself in court, saying he was not guilty because he bought a ticket for the game against India and brought joy to thousands who saw his video.

But he was found guilty and banned from all sporting arenas in England and Wales for two years – from one hour before an event starts to one hour after it ends. He was also banned from traveling abroad for 12 months.

The court heard Jarvis has 15 convictions for 21 offences, including being drunk on an airplane and trespassing on the pitch at White Hart Lane – the former home of Tottenham Hotspur Football Club.

At Croydon Magistrates’ Court, District Judge Daniel Benjamin said: ‘Your conduct was simply not cricket. It stalled the game for about five minutes.

“You deliberately attempted to disrupt a high profile sporting event in order to promote yourself and footage for your own YouTube channel, which you also likely benefited from a small percentage of the advertising revenue based on the number of views the channel was watched ‘.

Jarvis has already been banned from Lord’s and Headingley for being on the pitch during the second and third Tests against India. He was later found guilty of aggravated assault.

The court was shown footage of him running onto the field, as well as a video he recorded hiding in a toilet before sprinting onto the field after receiving a phone call prompting him was to go.

The court also viewed videos of him invading the pitch at two previous cricket matches between England and India, on August 12 at Lord’s and August 25 at Headingly.

Jarvis said he wasn’t arrested in the first two pitch invasions, claiming he didn’t think he was “breaking any law” and “no one has been previously prosecuted for these things.”

He went to the stand and said: “I had no intention of disrupting the game. I didn’t know when I came out. Why wasn’t I arrested sooner? Why is everyone attacking me for this?’

He said he gets “positive feedback” on his videos, which he makes “for people’s enjoyment,” adding, “I get a lot of people saying they have mental health issues and my videos make them happy.”

He responded to each question with “no comment” when questioned by police, the court heard.

Jarvis claimed he didn’t think he trespassed because he had a ticket and claimed people “ran out naked” during the games but weren’t arrested.

He told the judge he had contacted Bairstow “accidentally” and admitted “I don’t remember the man’s name”.

One of Princess Anne's bull terriers devastated another dog in the Sandringham shooting, a royal insider claims

Pokemon Let's Go Nuzlocke Challenge: How to beat it