Police were today hunting for a knifeman who stabbed a 21-year-old man to death at the Notting Hill Carnival last night as Scotland Yard confirmed it had made 209 arrests at the festival in West London including 46 for assault.

Officers gave the man first aid until paramedics arrived after the stabbing on Ladbroke Grove under the Westway flyover at 8pm, and he was taken to an ambulance ‘through significant crowds in challenging circumstances’.

The victim, who has not yet been named, was taken to a nearby hospital where he was pronounced dead. The Metropolitan Police said his next of kin have been informed and are being supported by specialist officers.

At 9.30pm, police activated special powers within the area under a Section 60 order which allowed them to stop and search a person without suspicion for ‘dangerous instruments and offensive weapons’ until 1am this morning. Detectives added that there had been ‘a number of violent incidents and serious stabbings’ at this year’s festival.

Scotland Yard said officers had made 209 arrests since the start of the carnival as of 12.01am today – including 46 for assault, eight for sexual assault, 36 for possession of drugs, five for criminal damage and 27 for public order.

Police added that there were also ten arrests for possession of psychoactive substances, 33 for possession of an offensive weapon, seven for drink or drug driving, one theft, one robbery and 35 more listed as ‘other’. 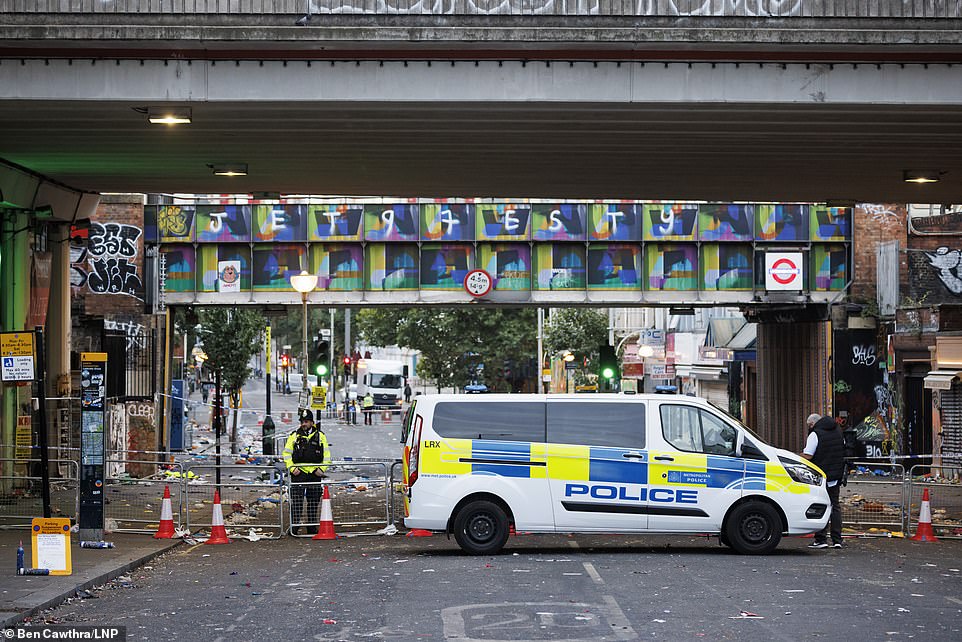 Police at the scene on Ladbroke Grove in West London this morning, after a 21-year-old man was stabbed to death last night

Police officers make an arrest at the Notting Hill Carnival last night. It is not clear whether this is linked to the stabbing

Police activated special stop and search powers from about 9.30pm last night until 1am this morning in the festival area

Dr Alison Heydari, Commander of Local Policing, said this morning: ‘Officers from across the Met have been working tirelessly over the past two days to ensure that all those who came to Notting Hill Carnival could enjoy the experience safely. It was the culmination of months of close coordination with the organisers, our local authority and emergency service partners and the community.

‘The atmosphere over the past two days has been largely positive and good natured as Carnival should be. Regrettably, on Monday evening we saw a number of violent incidents and a 21-year-old man has lost his life.

One of the Metropolitan Police’s most experienced and ‘affectionate’ horses died after collapsing while on duty at the Notting Hill Carnival on Sunday, the force has said.

Police Horse (PH) Sandown, a 14-year-old chestnut gelding, had policed ‘all types of events’ across London during his seven years of service since being presented to the force in 2015.

A statement paid tribute to PH Sandown’s ‘bravery and courageousness’ as well as his ‘affectionate character’. PH Sandown was said to be so good-natured that he was the ‘go-to horse’ for mounted branch officers who were starting their training.

A Met Police statement: ‘It is with great sadness that we confirm the sudden passing of Police Horse (PH) Sandown, who collapsed on Sunday August 28 at Notting Hill Carnival. PH 149 Sandown was a 14-year-old chestnut gelding who stood 16 hands high. He played an integral role in helping to police London. He was one of the Met’s most experienced horses, with an impeccable seven-year police career.’

The tribute added: ‘PH Sandown was gifted to the Met in 2015 and his good nature quickly won over officers. He was the go-to horse to help new officers grow in confidence as they went through their training.

‘A pro at policing all types of events across London, he demonstrated his bravery and courageousness at numerous football fixtures whilst also being selected to perform at the Mounted Activity Ride at Olympia, and the Mounted Musical Ride.’

The statement said the horse was ‘loved dearly’ and would be ‘sorely missed’.

‘Police horses are working animals, but PH Sandown was also an affectionate character who was full of personality. He loved his food and was always nuzzling in pockets looking for treats. PH Sandown was a massive part of the Mounted Branch family and was loved dearly. He will be sorely missed by all.’

A post-mortem examination is under way to determine the cause of the horse’s death.

‘Our thoughts are with his family as they come to terms with their terrible loss. A murder investigation is under way, led by homicide detectives from the Met’s Specialist Crime Command.

‘They will pursue every possible line of enquiry to identify those responsible and bring them to justice.

‘There were hundreds of people in the immediate vicinity when this incident took place. I would urge anyone who saw anything, who has video footage or who has any other information that could assist officers, to come forward.’

Anyone with information can contact the police directly on 101 providing the reference 7478/29AUG.

The Metropolitan Police Events account tweeted late last night: ‘A Section 60 order is in place within the Notting Hill Carnival footprint and borders. This commenced at 21:24 hours tonight until 01:00 hours 30th August.

‘This is following a number of violent incidents and serious stabbings. Crowds remain within the footprint and wider areas.’

It comes after a Met Police horse died after collapsing while on duty at the carnival on Sunday evening. An investigation has since been launched into Police Horse (PH) Sandown’s death.

The Met Police said the most recent carnival in 2019 cost it £8.6million to police. The festival does however bring hundreds of thousands of tourists into London and creates an estimated £120million for the economy.

Notting Hill is the largest street carnival in Europe and an estimated two million people were expected to have attended over the course of the Bank Holiday weekend.

The carnival first started in 1966, when about 1,000 people attended, and is famous for its celebration of Afro-Caribbean traditions.

Organisers said last night when it ended: ‘It’s been amazing to have the flamboyance and sounds of Notting Hill Carnival back on the road.

‘Carnival has now officially ended. Thank you all again for making it so special. See you next year!’

London Mayor Sadiq Khan also welcomed its return, saying: ‘I’m delighted that Notting Hill Carnival will be returning to the streets of west London this weekend.

‘This community-led celebration of Caribbean history and culture has become one of the world’s biggest street festivals and part of the very fabric of this city.

‘I urge everyone planning to attend Carnival to arrive early to make the most of this wonderful celebration of our capital’s diversity.’

Street cleaners will also now face daunting task of tackling the piles of rubbish left on the streets after the Notting Hill Carnival over the weekend.

Roads and streets surrounding the festival in West London were pictured full of piles of rubbish which included a destroyed Transport for London bike and tons of takeaway boxes.

Dancers dressed in colourful feathered outfits brought the party when it returned to the streets surrounding Notting Hill for the first time in three years.

On Sunday, footage showed the moment a bus stop collapsed during the carnival when a group of revellers danced on its roof.

A huge crowd watching people on top of the Kensal House bus shelter on Ladbroke Grove were heard to gasp and exclaim in shock as the top gave way and the revellers fell onto the pavement, nearly crushing four people below.

Scotland Yard said that of 0.01am this morning, a total of 209 arrests had been made since the start of Notting Hill Carnival for the following offences:

Two people suffered minor injuries but did not need further treatment after the incident, which came at the end of ‘family day’ which saw bright and dazzling costumes as the carnival procession made its way along the streets.

A woman also gave birth in a side street near the festival before paramedics took the mother and her newborn child to hospital.

Officers were seen comforting the woman before paramedics arrived and took the mother and baby away in an ambulance.

A London Ambulance spokesperson said: ‘We were called at 6.45pm on Sunday August 28 to reports of a person in labour within the footprint of Notting Hill Carnival. We treated an adult and baby at the scene and took them to hospital as a priority.’

MailOnline has asked for an update on the condition of the mother and baby.

Meanwhile one video showed two men punching each other before being pulled apart by others, after people around them were dancing and singing ‘Don’t Worry About A Thing’ to Bob Marley’s Three Little Birds.

Sunday kicked off with members of the Emancipated Run Crew – dressed in green in tribute to those who died at Grenfell – beginning the parade and marking the official launch of Notting Hill Carnival.

Crowds of young children blowing whistles danced down the streets with their parents in tow. Co-founder of the club Jules Stephenson said: ‘It (the atmosphere) is electric – everyone is so excited about carnival being back.’

Notting Hill Carnival (pictured yesterday), the largest street carnival in Europe, returned to the capital over the weekend

Dancers during the Notting Hill Carnival in London yesterday, which returned to the streets for the first time in two years

The two-day festival has had a two-year hiatus due to the pandemic.

Different sound systems dotted around the streets of West London entertained the dancing crowds as revellers smiled to the booming music.

Small children standing on the doorsteps of their houses waved Jamaican flags and waved at passers-by.

In other parts of the country ‘hooded youths’ ran through the campsites at Reading and Leeds Festival burning chairs and abandoned tents, it has emerged.

Anyone with information on the Notting Hill Carnival stabbing can contact the Metropolitan Police on 101 with the reference 7478/29AUG. Information can also be provided to Crimestoppers anonymously on 0800 555 111