Novak Djokovic allayed any doubts about his fitness after slipping on his dancing shoes during an entertaining spectacle with Nick Kyrgios.

Djokovic, 35, sparked concern among tennis fans after finishing a training session earlier this week when his coach was seen in Melbourne tending to a hamstring problem.

The Serb is aiming to win his 10th Australian Open title this year and it seems the fitness concerns won’t stop him from reaching that milestone. 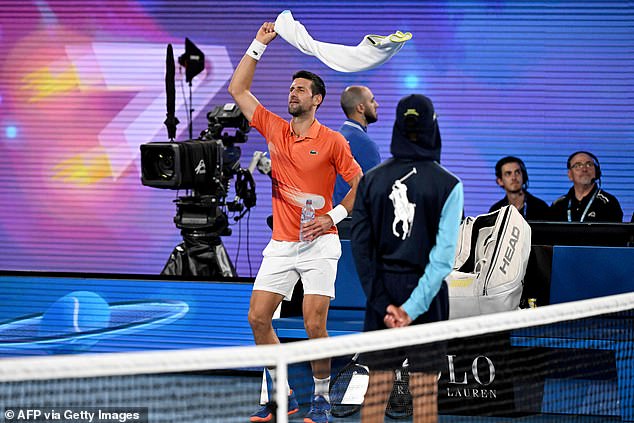 However, the Serb seemed to dispel any doubts with an entertaining performance

Djokovic stepped out at Rod Laver Arena on Friday and was seen with duct tape on his left leg, but that didn’t stop him putting on a show in a fun exhibition match with Australian star Kyrgios.

Kyrgios’ fitness was also in question as the 27-year-old retired from the United Cup and Adelaide International, two key warm-up tournaments ahead of the first Grand Slam of the year.

He was reportedly struggling with an ankle but the Australian appeared to move freely in a two-set match that ended in a tie.

All discount tickets to the exhibition which are $20 (ca saw the number of Serbian flags in the crowd.

After stepping onto the pitch, the nine-time champion said: “I’m very happy. Thank you very much. I’m feeling a little bit emotional. I was looking forward to returning to this dish.’

Djokovic and Kyrgios both wore mics and played in front of the crowd, who praised their antics.

Afterwards, Djokovic said: “It just feels great to be back in Australia, back in Melbourne. This is the court where I created the best memories of my tennis career.”

Kyrgios was one of the few players to stand up for Djokovic in the dispute over his vaccination status last year, thawing a frosty relationship.

“It’s just so important to have him with you,” Kyrgios said. “I don’t think we realized how special these guys are to our sport.”

Both men, who could face each other on the same pitch in the quarter-finals, start their campaigns on Tuesday, Djokovic against Roberto Carballes Baena while Kyrgios takes on Roman Safiullin.

https://www.dailymail.co.uk/sport/tennis/article-11631281/Novak-Djokovic-shakes-injury-fears-SHUFFLE-pre-Australian-Open-match-Nick-Kyrgios.html?ns_mchannel=rss&ns_campaign=1490&ito=1490 Novak Djokovic shakes off his fears of injury at the Australian Open in the warm-up match against Nick Kyrgios

Pictured: Missing wealthy aristocratic mother who was discovered after her disappearance in East London