A New York City school for children with brain disorders is being accused of a host of allegations including using students as ‘guinea pigs’ in scientific experiments, sexually harassing female employees, and being infested with cockroaches and dead rats.

A former employee of the International Institute for the Brain, a private school on the Upper East Side of Manhattan known as iBrain, also said the school scammed the New York government for extra funds and asked unqualified employees to perform nursing procedures on disabled students.

Former publicity associate for iBrain Katelyn Newman filed a lawsuit against the school on Tuesday after quitting in early December. In the explosive court documents, Newman accused iBrain founder Patrick Donohue of fostering a discriminatory and abusive work environment, and creating a neglectful and dangerous space for vulnerable students.

Newman’s attorney, Kenneth McCallion, told the Daily Beast the situation was a ‘major crime,’ and that his client was left seeking therapy to recover from the traumatic experience of working at iBrain.

International Institute for the Brain did not respond to requests for comment from DailyMail.com 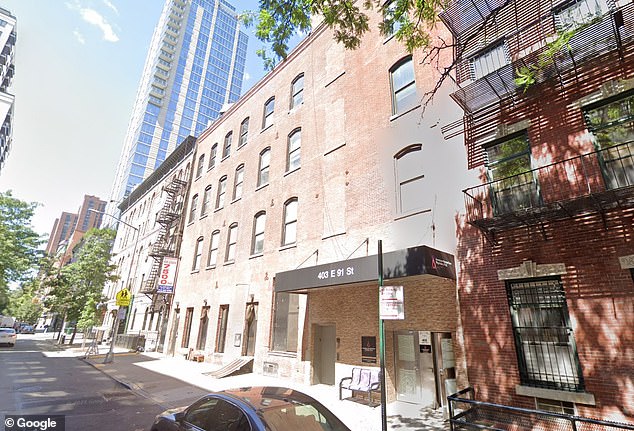 The International Institute for the Brain, a private school on the Upper East Side of Manhattan known as iBrain

Newman alleged that some members of staff were incompetent, fraudulent, and abusive towards women.

One staffer with questionable credentials was ‘chief innovations officer’ Dr. Victor Pedro – whose profile on the iBrain website carries the quote ‘If you want to be successful, look at what everyone else is doing and do the opposite.’

Newman said Pedro ‘held himself out as a neurologist or neuroscientist,’ but ‘Upon further digging, found out that Dr. Pedro had graduated with a B.S. from the University of Vermont in 1981, moved on to Boston University to study dentistry, but ultimately became a chiropractor, graduating from the New York Chiropractic College in 1983.’

The suit noted his chiropractic license expired in December 2021.

iBrain founder Patrick Donohue was accused of fostering a discriminatory and abusive work environment, and creating a neglectful and dangerous space for vulnerable students

Newman alleged that without the consent of parents, Pedro conducted research on students without informed parental consent.

‘Dr. Pedro showed Plaintiff his ‘brain power points’ promoting various controversial techniques that had not been approved by the FDA or apparently any other governmental agency,’ the suit read.

Dr. Alim Shariff, whose real name is Rodney Robinson. He is not a doctor according to the complaint

‘During the therapeutic phase, the patient performs several non-invasive audio, visual, visual-motor and proprioceptive activities that are used to activate and heal the injured or underperforming areas of the brain, or to optimize areas of the brain around the injured/problematic areas.’ Pedro’s personal website states. ‘For example, exercises could include visual (eye movement) tracking and pursuit activities, among others.’

‘The healing of the brain is accomplished over time through a series of individualized therapeutic sessions,’ his website claims.

The suit alleges some staff members were fired for ‘asking too many questions’ about the experimentation.

iBrain also hired a man who called himself Dr. Alim Shariff and claimed to be a former Naval Reserve Officer and a Harvard-educated behavioral psychologist.

In reality, according to the complaint, Shariff was a man named Rodney Robinson who was an ‘ex-con’.

Newman said he worked with special needs children ‘every day,’ and ‘was not challenged regarding his phony credentials or the so-called ‘clinical work’ he was engaged in, which, upon information and belief, turned out to be a complete fraud.’

The incompetence of management and staff even put students in physical harms way, Newman alleged, describing how teachers were often forced to carry out basic medical procedures on students they were not qualified to carry out.

‘Paraprofessionals employed at iBRAIN were told by management to perform certain nursing tasks, such as fixing G-tubes, even though they were not certified to perform those tasks and were not experienced enough to do it without causing unnecessary bruising and other complications,’ the filing read.

A G-tube, or gastrostomy tube, is inserted through a patient’s torso and into their stomach to bring food, hydration, or medication, directly into body.

‘One student had to go to the hospital because his circulation was impeded, and his legs swelled up.’

‘Upon information and belief, upper iBRAIN management, such as Dr. Katandra Johnson, knew about these unlawful practices for weeks/months but did nothing to stop it. Plaintiff noticed that Dr. Johnson held herself as having a PhD, when, in fact, she only had a graduate degree on public health.’

iBrain staff with a student. The school demanded many staffers do medical tasks they were not qualified to do

The court filing states that the first thing Newman noticed upon beginning work at iBrain was the filth of the school.

‘The first thing she noticed was that the facility located on East 91st Street was extremely filthy and unsanitary,’ the filing read. ‘The floors were generally left unwashed, spiders and bugs everywhere, with often no toilet paper, paper towels, soap, hand sanitizer, or running water in the bathroom.’

‘The cockroaches were so prevalent that they were sometimes nested in students’ wheelchairs.’

The building also had frequent leaks in the plumbing, which the filing said were ‘stuffed up with Dorito bags or whatever else was readily available.’

‘At one-point, some disgusting and gross-smelling residue started falling from the ceiling in therapist’s office area, but there were no immediate instructions given to vacate the premises. The carcass of a rat could be seen for an extended time period before it was finally removed, and the ceiling over the entryway where the children entered the building was falling down.’

Newman also described an incident where a student vomited on the floor, and school management insisted that the mess merely be covered with a paper towel and not be cleaned up until the end of the day.

‘Apparently, the vomit was not cleaned up for 24 hours,’ the filing read.

The lawsuit also said the inhumane conditions extended to things such basic as the school’s air conditioning, which were allegedly non-existent even through summertime heat waves.

‘On certain days during the humid end of summer, there was no working air conditioning, but the children were not sent home early on such days.’ the suit read. ‘At times, when the temperature reached as high as 86 degrees Fahrenheit, some of the children started having seizures more frequently than usual.’

‘Even despite these dangerous emergency conditions, the students/children were not evacuated for their safety.’

The decrepit state of the school did not add up to Newman, who had been told the school received between $100,000 and $350,000 from the New York Department of Education per student.

‘There was little evidence, as far as Plaintiff could see, that the funds were being used for services to the children/students.’

Despite that funding, basic school supplies like pencils, and special needs education tools and equipment like wheelchairs, sensory regulation objects, and oral motor tools, were in short supply.

Supplies were so limited parents would often have to provide themselves, even sending their kids to school with their own mats because the school’s were too ‘filthy and unsanitary’ for kids to use.

‘Some of the teachers paid for urgently needed equipment out of their own pockets, which seemed odd since almost every child (if not all) were being paid for by generous DOE funding,’ the suit read.

Newman also described being routinely sexually harassed by employees like Dr. Pedro, who ‘regularly subjected Plaintiff and other women working at iBRAIN to sexual harassment by making sexually suggestive and inappropriate remarks.’

‘Other women in the office told Plaintiff that Dr. Pedro often made them feel uncomfortable when he inappropriately made it clear to them in various ways that he would like to have a personal and sexual relationship with them.’

She said iBrain founder Patrick Donahue was well-aware Pedro’s behavior went past ‘harmless flirtation’ and crossed the line into sexual harassment, but did nothing about it.

Donohue himself was allegedly an emotionally abusive boss who regularly yelled at Newman until he was read in the face, told her to ‘shut up,’ would question her competence in front of colleagues, and fostered a sexist environment in which female employees would be given enormous workloads with unreasonable deadlines while male employees were taken out to long lunches and even allowed to sleep in the office.

After trying to quit in November, Donohue convinced her to remain with a pay raise and promises things would change, but she finally submitted her final resignation after Donohue had an angry fit where he allegedly screamed ‘You’re so unprofessional, pathetic, and incompetent’ at Donohue.

Another problematic employee was iBrain’s director of strategic planning, Suzanne Wallach, who Newman said ‘bombarded’ her with ‘questions, complaints, accusations and insinuations’ around the clock, and then would go into ‘radio silence’ for days when deadlines approached.

Though Donohue’s own daughter attended the school, Newman alleged that she would receive ‘special and favored treatment’ that the other students were deprived of.

‘She was provided with a rocking chair, bed, and private changing room that the other students were not permitted to use,’ the filing alleged. ‘In contrast, the rest of the students in the school had to share four changing rooms and some students slept on the floor.’

Newman also said she learned that Donohue and his wife set up a transportation company called Sisters Travel and Transportation Services LLC that iBrain would hire to bring students on field trips that did not require transportation.

‘Most of the field trips were within walking distance of the iBRAIN facility, since many of the students were non-ambulatory and had to rely on wheelchairs to get to nearby parks.’

Donohue would send the transportation bill racked up with ‘fictitious’ charges to the DOE.

A body is found in Roselands' home