A father who shot dead his daughters’ ex-boyfriend as he tried to break into their home can be seen laughing with officers during his interview hours after the killing.

Mitchell Duckro, 52, shot his daughter Allyson’s former boyfriend James Rayl 22, three times after he showed up unannounced to their home in Sidney, Ohio, on July 31.

New footage obtained by DailyMail.com show Mitchell recalling the moments leading up to the shooting, telling officers at Shelby County Sheriff’s office that he was ‘nervous’.

Rayl had dated Duckro’s daughter, Allyson, 22, previously but the pair broke up a year and a half before the tragic incident.

Allyson told cops that she had broken up with Rayl in 2019 because he was ‘just being a d***’ and in the aftermath, she was forced to block him on social media.

Mitch claims that he tried to get Rayl’s attention by shouting his name from the garage door but was ignored, so locked it to ensure he didn’t ‘sneak in’.

Describing the moment that he shot the gun, Mitch said: ‘I noticed he started to jiggle the handles and stuff to see if it was locked and that was when I went up to the door.

‘I wanted to make sure he wouldn’t force his way in. I’m pretty sure I was telling him to stop and leave and get off my porch or something. 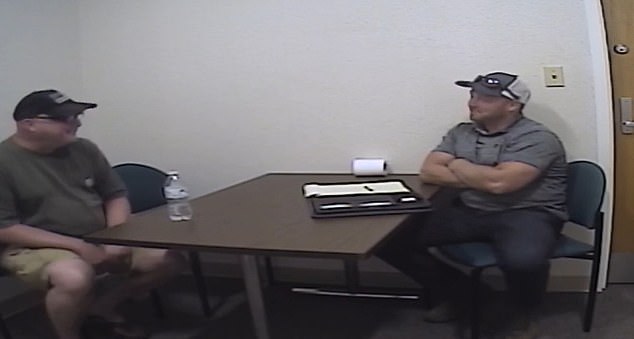 New footage obtained by DailyMail.com shows Mitchell explaining what happened in the lead up top the fatal shooting on the porch of his home in Sidney, Ohio

James Rayl, 22, tried to force his way into his ex-girlfriend Allyson Duckro’s house when her father shot him three times, killing him

‘But I had my nine in my hand and then he started hitting it with his shoulder, pretty hard. Eventually he was getting in, and when the door was open is when I shot.

‘I shot through the window part of the door, because it was open and he was coming in. I didn’t have no grip.

‘I was trying to shoot but I couldn’t, I freaked out finally did it and he was pushing hard and the gun fired I think three times twice up here and maybe another one I’m pretty sure it was three.

‘They were all through the glass. He had turned and went off the porch and it’s kind of hard to remember after that.

‘We was all freaking out obviously, I saw his legs lying there.’

Mitch told officers that his daughter and wife, Stacie, 51, were ‘freaked out’ because of a voicemail that Rayl left Allyson the night before.

He claims that she asked him if he was ‘expecting anyone’, after Rayl’s car pulled up outside their home in Sidney, moments after they returned home from breakfast.

During an interview with officers he was also seen chuckling while telling authorities that his daughter didn’t tell him much about the relationship.

Allyson also laughed and smiled with the detective as she recounted her experience of the day, said that Rayl would often say things to upset her when they were together.

James Rayl, 22, waited at the front door of Allyson Duckro moments before her father shot him three times when he tried to break in

Mitch Duckro, 52, and his daughter Allyson, 22, can be seen here talking to Shelby County Sheriff’s officers for the first time

Allyson appears to be smiling in an interview with officers, and was heard in a 911 call telling her dad he ‘saved her life’ after Rayl allegedly tried to break into the home

Mitch admitted that the firearm used in the shooting belonged to his father-in-law, and had been given to him after he went into a home but it was not registered in his name.

When asked if he remembered Rayl, he added: ‘Mostly I don’t recall meeting him. I knew it was not going the way that Ally was saying that they didn’t get along and it seemed like it was all taken care of and everyone went their separate ways but I guess not.’

His daughter told cops that she started ‘freaking out’ after her ex tried to break into the property, and ‘ran and hid’ because she didn’t know what to do.

She added: ‘I though the was always very nice. He was okay in high school but after he got back from California, he was just different.

‘His close friends…he just started treating like c***and nobody wanted to deal with it.’

Rayl left his ex-girlfriend a voicemail the night before the porch shooting, saying he wanted to see how she was doing.

He told police that he shot the man three times through the window part of the door after repeatedly telling James to get off his porch.

According to Allyson, her father said ‘I don’t like that,’ when Rayl started twisting the doorknob – so he went to retrieve a gun from his bedroom.

In the clip, Rayl can be seen trying to push his way into the property, as Duckro says ‘James no, get off my porch’ and then ‘I have a gun’ before shooting him.

He then staggers away from the door before collapsing in the driveway of the property, with only his feet visible on the camera.

Neighbors are also seen running out after hearing ‘four or five’ gunshots but left Rayl dying on the floor for at least seven minutes before law enforcement arrived.

Recalling the ordeal, Duckro’s wife Stacie, 51, teared up and admitted her daughter was ‘terrified’ as she watched Rayl trying to get into their home.

‘He tried to get my daughter,’ she said in the interview.

As her husband was confronted with the man banging at the door, the mother said she pushed her daughter down a hallway to protect her from Rayl.

Rayl did not speak or make a sound during the ordeal, Stacie told detectives.

The mother was in floods of tears during her police interview. Speaking about Rayl’s tragic death on her doorstep, she added: ‘I can’t imagine what his parents are going through.’

She also said she’s worried for her husband Mitch, who suffers with anxiety – as this is the ‘last thing he would have ever wanted to do to anybody.’

The Duckro’s $436,000 property in Ohio has also been put up for sale since the incident, with the family apparently planning to relocate

Duckro, pictured being interviewed by cops, told police that he shot the man three times through the window part of the door after repeatedly telling James to get off his porch

Stacie told neighbors that they already called the emergency services and initially was told not to approach as they thought he had a gun.

Hereford then asked ‘did you shoot him?’ before they shouted back ‘yes!’ at him, and he replied ‘he’s not moving, he ain’t going nowhere’.

Two other neighbors can also be seen standing around looking, as they waited for the police.

They said ‘he’s barely breathing, he’s having a hard time breathing’ and ‘I don’t see any blood’ before wandering over to Rayl’s body, adding ‘he’s dead’.

Rayl was pronounced dead at the scene by first responders, with an autopsy ruling that he sustained two gunshot wounds to the shoulders and a fatal wound to the back.

‘And maybe hear from you if that would be alright I guess. It’s been a while since I’ve talked to you and I don’t know, I feel like, I don’t know what I feel.’

Duckro reportedly replied to him saying ‘what’s up’ after receiving the voicemail, despite claims by the family that it was ‘scary’.

Sources have also claimed that Allyson had previously worked with the Sheriff’s department as a dispatcher.

A grand jury ruled 8 to 1 that Duckro should not be indicted on a felony charge, under the ‘Stand Your Ground’ ruing in Ohio State legislature.

The legislation and ‘Castel Doctrine’ laws allows homeowners to use lethal force when threatened.

Neighbors just stare at Rayl as he lays dying on the front porch of his ex-girlfriend’s family property in Sidney, Ohio, on July 31

New footage obtained by DailyMail.com shows Allyson explaining her relationship with her late ex-boyfriend who was shot at her home in Ohio

On the 911 call Allyson Duckro can be heard praising her father, saying: ‘Dad, there’s nothing you could have done, you saved my life.’

In a joint statement Shelby County Prosecutor and Shelby County Sheriffs office said: ‘The front door was a solid wooden door with a deadbolt.

‘The deadbolt was found to be in the locked position and the casing to the lock side of the door was broken.

‘Three holes were found in the decorative glass window in the door and three hollow point 9mm spent cartridges were found on the floor. The weapon was located on the mantel of the fireplace.

‘The occupants of the residence were identified as Mitch Duckro, Stacy Duckro and Allyson Duckro, and initial interviews of the Duckros were conducted at the scene.

‘Mitch Duckro indicated he fired the weapon and admitted to discharging it three times. Allyson Duckro said she was familiar with James Rayl, as they dated each other until they broke it off a year and a half earlier.

‘She made law enforcement aware of a voicemail that Rayl had left for her late in the previous evening.’

Rayl’s family have launched a ‘Justice for James’ campaign, saying that he was ‘murdered’ by Duckro and that ‘justice will be served’.

His sister, Jessica, also posted online: ‘Mitch shot him in the back and killed him. And we know more than just that Mitchy.

‘I hope your days are more miserable than they’ve ever been. You’re a disgusting excuse of a human being along with your daughter.’