By Emma Cary for Mailonline

Olivia Attwood and her fiancé Bradley Dack were enjoying a leisurely stroll as they headed out for a Sunday lunch in Cheshire.

Accompanied by their Rottweiler Stitch, the couple looked relaxed as they walked the rain-soaked streets. 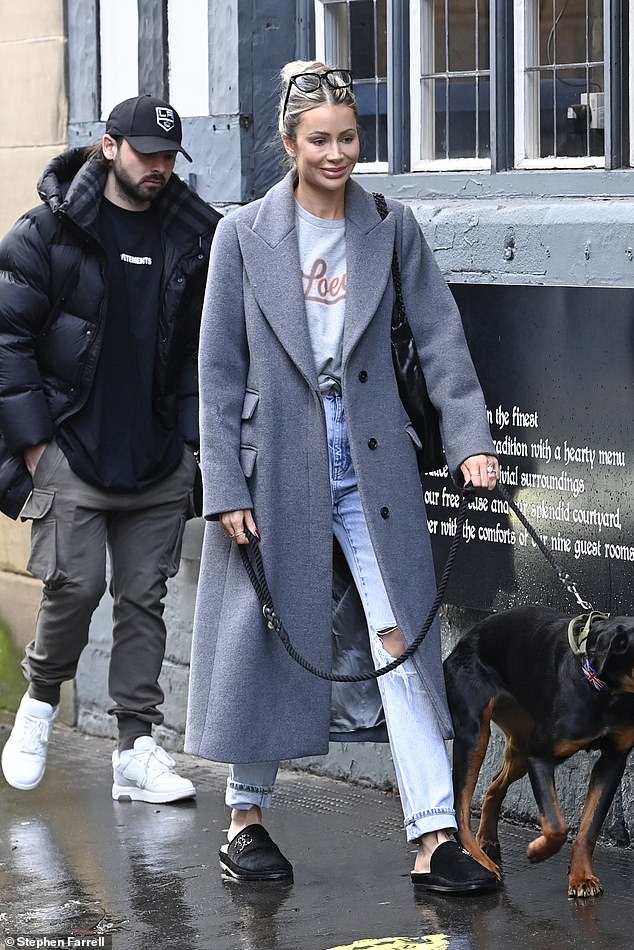 Lazy Sundays: Olivia Attwood meets up with her fiancé Bradley Dack and their pooch Stitch for a Sunday lunch.

She completed the outfit with black Coco Chanel flats, a black shoulder bag and black cat-eye glasses balanced on her head.

Olivia kept her makeup and jewelry minimal and her long blonde tresses were scraped into a neat bun.

Smart casual: The TOWIE star accessorized her distressed jeans and tee with a gray wool coat and Coco Chanel flats.

Bradley sported a more casual outfit, wearing a black down jacket over a t-shirt and charcoal cargo pants.

The Blackburn Rovers midfielder completed the look with a black beanie and crisp white trainers.

The couple adopted their pup back in August 2022 and found their beloved pet through the charity Many Tears Animal Rescue.

The engaged couple appear to be in love as always as they celebrated Bradley’s 29th birthday in style at the Ivy in Manchester on December 31.

Olivia and Bradley originally met at a West End nightclub in 2015 after being introduced through mutual friends.

They dated for three months before the romance fizzled out and Olivia decided to go on Love Island – later confirming Bradley was the ex she talked about in her introduction to the show.

Date night: The former Love Island star celebrated her footballer beau’s 29th birthday with her pals at the lavish restaurant

The lovebirds reunited in 2018 after the Love Islander ended her romance with finalist Chris Hughes, who she was linked to on the 2017 show.

They got engaged in October 2019, and the footballer popped the question in Dubai.

However, their wedding has been postponed several times due to Covid-19 and Bradley suffering an injury.

Happy birthday: Olivia announced her engagement to Bradley in October 2019, sharing sweet snaps of the couple on a Dubai beach after the footballer popped the question

That walk was a happier affair than recent walks by Oliva, after the reality star was left in tears last month after a passer-by branded her “that fucking crazy bitch from TV”.

In a series of videos for her 2million Instagram followers, she explained that she was confronted with a dog walker, which she described as a “horrific experience”.

She also admitted that this was the first time she had cried since she left I’m a Celebrity…Get Me Out of Here! Jungle back due to illness in November.

https://www.dailymail.co.uk/tvshowbiz/article-11637689/Olivia-Attwood-looks-relaxed-jeans-sliders-steps-Sunday-lunch.html?ns_mchannel=rss&ns_campaign=1490&ito=1490 Olivia Attwood looks relaxed in jeans and mules as she heads out to Sunday lunch

Biden tears up "racism, extremism, insurgency" in a politically charged speech at the church once led by MLK