Tokyo Olympics star and Australian athletics figurehead Peter Bol has vowed to clear his name and assured fans he is innocent after testing positive for performance-enhancing drugs.

Athletics Australia have confirmed that Bol, the fastest Australian in the 800m in history, has returned a positive A sample to the performance-enhancing drug EPO and is now nervously awaiting the results of the B sample. 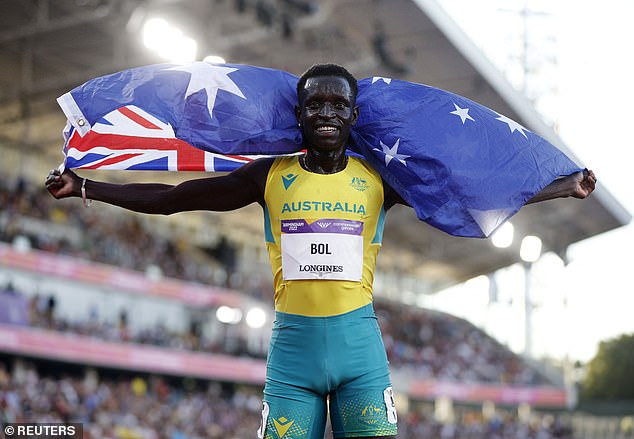 He has been provisionally suspended until these results are clear.

Bol took to social media on Friday afternoon to protest his innocence.

“It is vitally important to convey with the strongest conviction that I am innocent and did not take this substance as I am accused of,” he wrote.

“I’m asking everyone in Australia to believe me and let the process happen.

“When I learned last week that the A sample of a urine sample taken on October 11th tested positive for synthetic EPO, I was totally shocked.

“To be clear, I have NEVER purchased, researched, possessed, administered or used synthetic EPO or any other prohibited substance in my life.”

Bol competes in the Commonwealth Games, where he made his name before his giant-kill performances at the Tokyo Olympics

Bol was famous for becoming Australia’s first medalist in the 800m at the Tokyo Olympics, finishing fourth in the final.

The positive result has sent shockwaves through the Australian athletics community as Bol has been a tale of inspiration and rising above adversity since his big showing in Tokyo.

He became a household name as he charged forward to lead all runners to victory in the semifinals before narrowly missing out on the bronze medal.

Bol has voluntarily turned over his phone and laptop to investigators, while his oach Justin Rinaldi and agent James Templeton have also offered to turn in their devices.

“I have asked for the analysis of my B sample, which will take place in February,” Bol wrote.

“Given the subjective nature of the interpretation of this type of test, I have requested that the laboratory perform a second confirmation.

“Above all, I continue to hope that the process will relieve me.

Bol’s family cheered on him from their home in Perth, Australia, as the young middle-distance runner made national history at the Olympics

“My career, hopes and dreams are literally at stake over the next few weeks and I ask everyone to respect my privacy as I remain on temporary suspension.”

Born in Sudan, Bol’s family migrated to Egypt before gaining humanitarian status through the UNHCR, arriving first in Toowoomba before settling in Perth.

A talented basketball player, Bol didn’t start out in athletics until he was 16, but quickly shot through the ranks.

The drug scandal is likely to have implications for Bol’s potential Young Australian of the Year election next Thursday.

He was recognized as Western Australia’s Young Australian of the Year for his work as a coach, mentor, keynote speaker and philanthropist.

The drug scandal is likely to have implications for Bol’s potential Young Australian of the Year election next Thursday.

He was recognized as Western Australia’s Young Australian of the Year for his work as a coach, mentor, keynote speaker and philanthropist.