One couple who collect real fur claim they have higher ecological ethics than most vegans.

Judi Caldwell, 41, and her partner Lukasz Dlubek, 36, from Northern Ireland, who both share a love of furry clothing, often wear coats, scarves, hats and gloves in mink, raccoon, fox, moleskin and even chinchilla.

The couple believe that wearing real fur not only makes them look incredible, but it’s also more sustainable and eco-friendly than man-made alternatives and many vegan products. 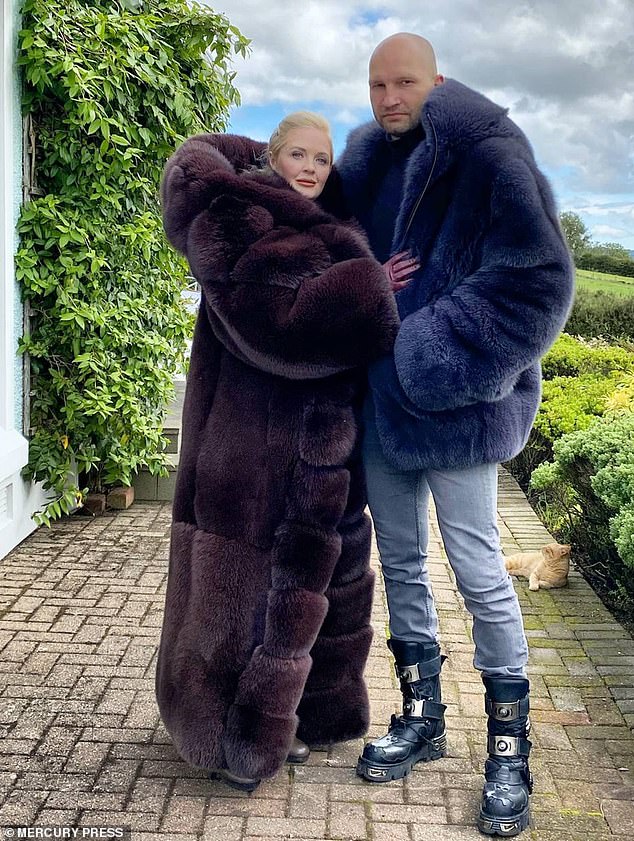 Judi Caldwell, 41, and her partner Lukasz Dlubek, 36, from Northern Ireland, who collect real fur, claim they have higher ecological ethics than most vegans

While the duo say their collection makes them feel elegant and classy, ​​the couple also revealed that they often face the relentless hatred of vegans online and have even received death threats for their fashion choices.

Judi said: “There is a lot of green washing these days and a big emphasis on veganism and vegetarianism.

“We try to promote sustainable fashion by wearing fur, but people are quick to jump online and judge us.

“The hate we receive from many vegans online is appalling and I’ve even had messages from someone threatening to slit my throat and my dog ​​for wearing fur.

The couple, who often wear coats, scarves, hats and gloves made from mink, raccoon, fox, moleskin and even chinchilla, claim it’s more sustainable and eco-friendly than man-made alternatives and many vegan products

Lukasz (pictured) admitted it’s unusual to see a man in fur, but he likes it, while the duo say their collection makes them feel elegant and classy

“I’m wearing this to honor my grandma who was kind of a fashionista – she was the kind of lady who wore stiletto heels to match her jacket and a fur jacket over it – I always thought she was so classy.”

“These vegans like to attack us, but they don’t think about where their soy comes from or the sacrifices made to get it.

“The clothes we wear are more sustainable and we’re more respectable than these people because our message is never hate. It’s about spreading positivity and networking through fashion.

Lukasz added: “There’s a notion out there that it’s unusual for a man to wear fur, but I like it.

Judi said people think they’re trying to prove we’re of a “higher class” or show they have money, but she insists that’s not the case

“Some people think we’re trying to prove that we belong to a higher class or show that we have money, but that’s not true at all – we’re just normal people.

“Public debate on this issue is very biased and the common argument against us is that fur is immoral, but we stay and like to see both sides.

“Fur farming can and is to a greater extent ethical. There is a lot of scientific evidence for this. ‘

“The alternative is the faux fur argument, which isn’t remotely similar.

“They ship this from Bangladesh and China while pretending it’s the ethical choice while sourcing ours locally and supporting smaller businesses.

“Real fur lasts so much longer when properly cared for, while faux fur is quickly becoming fashionable – what happens to all that plastic that goes into making it!”

Judi and Lukasz have collected over 15 furry items so far, but the pair say there’s often a seedy stigma attached to their furry style

Judi and Lukasz have collected over 15 furry items so far, but the couple say there’s often a seedy stigma attached to their furry style.

Judi said: “Some people have the idea that those who wear fur are mentally damaged and evil.

“Others try to do it with sex or even prostitution, but here I even wear mine to the mall because I think I look smart and stylish – I’m trying to break that bond because other people’s views aren’t the reason why.” I hate it.

Judi revealed that some people have the notion that those who wear fur are “mentally damaged and evil”.

However, Judi admitted that she only gets hate online and actually gets compliments when she’s out in public.

“I always get nothing but positive comments when I’m out – people asking to touch it and saying I look fabulous.

“I will never understand why people are so terrible.

“What society lacks is that adults can’t accept that you can have disagreements and still be respectable — that’s scary.”

However, Judi admitted that she only gets hate online and actually gets compliments when she’s out in public

WHAT IS FAUX FUR?

Faux fur is faux fur. It is made from a variety of different fabrics to resemble real fur.

Most faux fur is made from synthetic materials such as acrylic and polyester blends.

These materials create products that look so soft and authentic.

The synthetic fur fibers are made by mixing different monomers in a large stainless steel tank before being pressurized in a high temperature environment.

Faux fur was created to end factory farming, a controversial practice banned in 10 European countries and directly linked to the fur trade.

Many fashion labels have recognized the importance of reducing the number of animals used by the industry.

Fashion designers turned to faux fur, reducing the number of animals used by the fashion industry by millions.

Around 50 million animals are killed every year just for the production of real fur products – currently 0 animals have to be killed for fake fur.

https://www.dailymail.co.uk/femail/article-10844873/A-couple-collect-real-fur-claim-higher-ecological-morals-vegans.html?ns_mchannel=rss&ns_campaign=1490&ito=1490 One couple who collect real fur claim they have higher ecological ethics than most vegans

How far is Vail From Denver

What You Need to Finance A casino

When Should You Hire a Private Counsellor?