Sandringham shooting escalates to ‘blood’ and ‘screams’ after one of Princess Anne’s bull terriers mauled another dog, a royal insider claims

By Matthew Lodge for Mailonline

One of Princess Anne’s English bull terriers attacked another dog during a pheasant shooting on Boxing Day, a royal insider has claimed.

An insider said the king’s sister was taking her dog to the family reunion in Sandringham when it smashed its teeth into the gamekeeper’s pet in a “frenzy”.

While the animal survived, the source said there was “a lot of blood and a lot of screaming,” and the group feared things could end in tragedy.

It could get the princess in trouble, with some viewers asking, “What if it was Charlotte or George or one of the kids instead?” 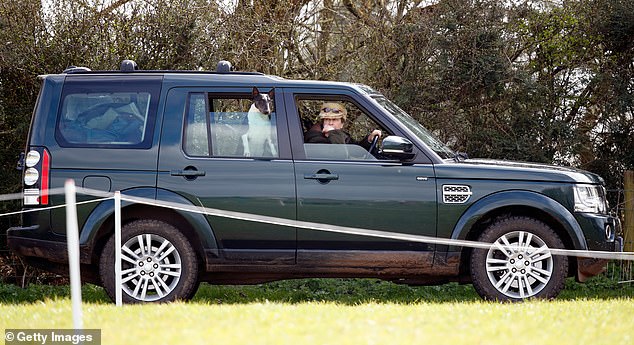 Princess Anne pictured with one of her bull terrier dogs in her Land Rover in 2019. It is alleged that one of her dogs attacked another animal in a royal shooting on Boxing Day

A royal insider told the Sun: “It took a while to get the dog off his ear because he was really stuck.

“Everyone was okay in the end, but the atmosphere was extremely tense for a while afterwards.

“Some people have wondered what if it was Charlotte or George or one of the kids instead of another dog?”

According to the newspaper, Norfolk Police and the RSPCA have received no reports of the alleged incident.

MailOnline has reached out to Buckingham Palace for comment.

The incident is said to have happened during a pheasant hunt at the royal estate in Sandringham (pictured).

Anne keeps a tight grip on her three English Bull Terriers while at the 2003 Gatcombe Horse Trials. Among the dogs pictured are Dotty and Florence, both of whom had attacked humans

It wouldn’t be the first time Anne’s beloved bull terrier has turned violent as her pets have been previously seen attacking other animals and even humans.

In 1993 her dog Eglantyne went to Gatcombe after attacking a smaller dog in Windsor two years earlier.

In 2002, one of her terriers, Dotty, attacked two boys aged seven and twelve at Windsor Great Park after she was let off the leash.

Anne was fined £500 by judges under the Dangerous Dogs Act, becoming the first royal to be convicted in court of a non-speeding offence.

The following year, Dotty’s mother Florence bit housemaid Ruby Brooker on the knee before later manhandling one of the Queen’s corgis, Pharos, so badly that he had to be put down.

Florence and Dotty were sent for retraining, but Anne’s bull terriers gained such a reputation that Queen Elizabeth II banned them from the Sandringham home.

https://www.dailymail.co.uk/news/article-11646973/One-Princess-Annes-bull-terriers-savages-dog-Sandringham-shoot-Royal-insider-claims.html?ns_mchannel=rss&ns_campaign=1490&ito=1490 One of Princess Anne’s bull terriers devastated another dog in the Sandringham shooting, a royal insider claims