Rising NRL star Taylan May has been found guilty of assaulting a teenage footy fan while celebrating Penrith’s big finals win with teammates.

The 21-year-old winger was with Nathan Cleary, Jerome Luai and May’s brother Tyrone at the Duporth Tavern in Maroochydore on October 8 last year when the incident unfolded.

The court heard Cleary approaching an 18-year-old man who previously took video of him – which the star halfback wanted deleted.

CCTV footage showed May stepping behind the man while he was speaking to Cleary and Tyrone May.

Then you can see how he grabs the man by the shirt collar and pulls him to the ground. 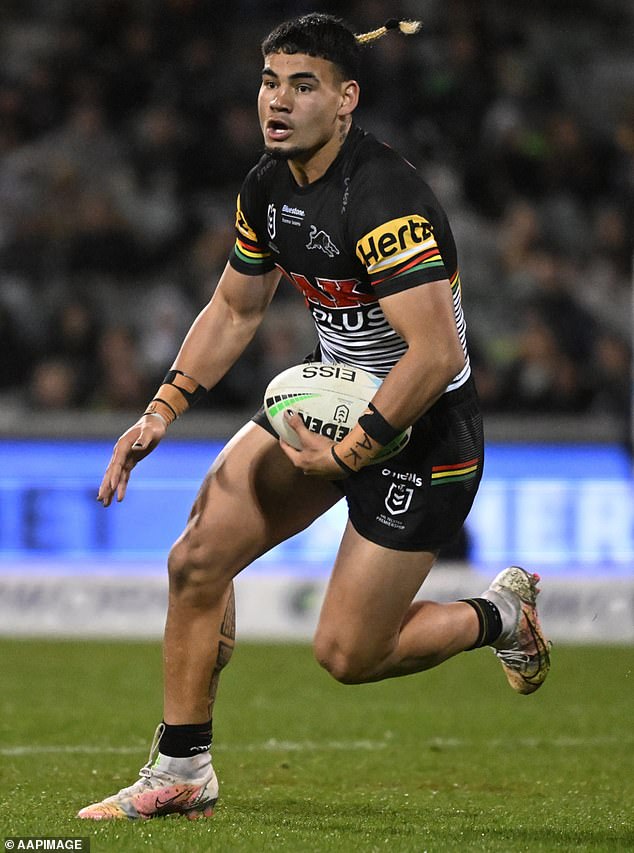 The 21-year-old winger was with Nathan Cleary, Jerome Luai and May’s brother Tyrone at the Duporth Tavern in Maroochydore on October 8 last year when the incident unfolded (pictured, Penrith celebrates his title on October 3).

During the ensuing argument, the man hit his head on the ground and suffered a sprained neck.

May pleaded not guilty to the charge of assault.

Before the verdict, May insisted he was trying to defuse the situation and protect Cleary.

“Anyone in my position, if they were a good friend, would have done what I did,” he told the court.

“I stood up for Cleary. I don’t think I was wrong. I didn’t want the situation to escalate.”

Nathan Cleary (left, with his father and Penrith coach Ivan Cleary after the team’s big final triumph in 2021) previously said May always put other people before him

After May was charged in April, Penrith released a statement which said: “The club were made aware of the incident at the time, informed the NRL Integrity Unit and launched an investigation into the matter.

“The club subsequently took disciplinary action against (Taylan) May.”

No conviction was recorded.

May was not removed from the Panthers either after the incident or during the trial.

He won’t play against the Cowboys in Townsville this weekend after coach Ivan Cleary decided to rest 12 players – but is expected to be free to play in Penrith’s finals campaign as the minor Premiers chase back-to-back NRL titles.