Newly released records show that two police officers were suspended without pay after they verbally abused a 5-year-old boy who had left his primary school, calling him a “shepherd of the devil” and threatening to beat him.

Details of the lengthy internal investigation at the Montgomery County Police Department were revealed as the county paid out $275,000 in a settlement following the incident at Maryland’s East Silver Spring Elementary School.

Officers Dionne Holliday and Kevin Christmon were seen holding the crying child to a chair and shouting insults such as “I hope your mom let me hit you” in body camera footage that went viral.

One of the officers removed his handcuffs and fastened one of the loops around the child’s right wrist.

“When you get older, when you want to make your own decisions, do you know who your best friend will be?” an officer asks the frightened boy.

Holliday was banned for four weeks and Christmon for two weeks following an internal investigation. 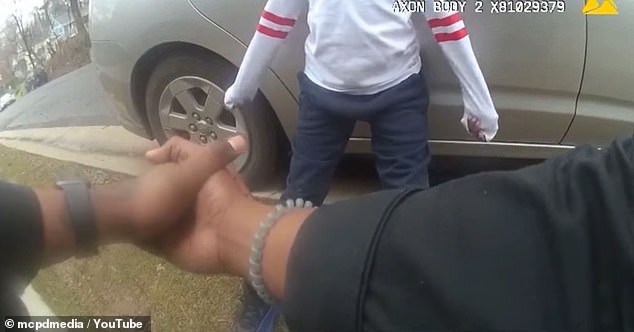 Montgomery County Council member Will Jawando said the pictured video of the boy at East Silver Spring Elementary School “made me sick.”

That money will go into a trust fund that the child can access once they turn 18, the Washington Post reported.

Officers defended themselves and their actions, and Christmon said, “I really think my actions at the time were appropriate,” as he held the child in a chair for 80 seconds.

Holliday admitted she verbally abused and yelled at the child and admitted she called him a “shepherd of the devil,” but also said he acted that way.

The incident began on January 14, 2020, when the boy got upset in his kindergarten class, threw a clipboard at a classmate and teacher, and then fled the school.

Officers found the boy about a block from East Silver Spring Elementary School.

Christmon grabbed the boy’s left arm and pulled him toward other officers and police vehicles, prompting the child to yell “no” and “I don’t want to go.”

Christmon justified his behavior by saying that the child “seemed rebellious and headstrong because he didn’t want to go back to school.”

Officers told him, “You are not making this decision for yourself” and took him back to the school in a squad car, where they were met by a school administrator.

The video shows an officer forcing the crying child into a chair in the principal’s office.

‘Now stop the noise!’ cried Holliday next to the boy’s face. “I hope your mother let me hit you.

Holliday said when asked if she said that in the inquest, she didn’t recall saying it.

The boy’s mother, Shanta Grant, came to school that day and eventually received $275,000 in a settlement after filing a lawsuit

“Oh my god I would hit him so bad,” Holliday said in front of the child, before telling him, “You don’t embarrass me that much at school.”

Grant’s attorneys Matthew E. Bennett (left) and James Papirmeister said officers treated the boy “as if he were a hardened criminal.”

Matthew Bennett and James Papirmeister, attorneys for the child’s mother, Shanta Grant, said the video shows officers treating her son “as if he were a felon.”

They said the way the boy was treated went “well beyond the line of emotional child abuse.”

I’ve been working with police misconduct cases for 25 years … and every case is different, but I don’t recall ever having a case involving a 5-year-old who was treated this way,” Bennett said.

Grant appears in the footage, stripping her son once to show that she doesn’t hit him and that he’s not being “physically abused.”

“I’m not losing my kid to the system and I’m not going to jail,” she says in the clip.

“You don’t go to jail for hitting your child,” an official tells the mother.

The Washington Post reports that the police department and the county’s public school system have declined to cover the incident in detail, citing the mother’s pending lawsuit. However, the school system issued a statement calling it “extremely difficult” to watch the video.

“There is no excuse for adults ever to address or threaten a child in this manner,” the school system said. “As parents and grandparents, we know that when families send their children to school, they expect staff to care for them, protect them and use appropriate intervention procedures when necessary.”

Montgomery County Council member Will Jawando said the video made me sick.

“We have all seen a young boy taunted, humiliated, put in the seat of a police car and yelled at the top of his lungs by an adult police officer inches from his face. This is violence,” Jawando said.