Ticket to slide! Paul McCartney’s ex-wife Heather Mills has been named the fastest disabled skier of all time after skiing a staggering 100mph in France

The successful attempt for the former model and amputee has finally been included in the Guinness Book of World Records.

Mills could now snag two more record-breaking crowns, with two more announcements to follow for her attempts at skeleton and ski jumping. 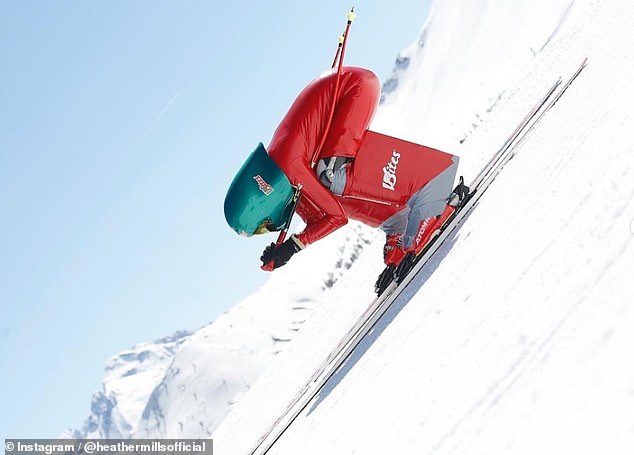 Mills achieved a breathtaking speed of 164.95 km/h in a 2015 test in Vars, south-eastern France

Mills lost her left leg after a traffic accident involving a police motorcycle in Kensington, London in 1993. Her left leg was amputated below the knee and she has worn a prosthesis ever since.

In 2010, at the age of 42, Mills began her competitive skiing career two years after her divorce from legendary Beatle Sir Paul McCartney.

Despite her advanced age, she won 4 gold medals in super giant slalom and downhill at the 2012 World Ski Championships in Aspen.

Skiing is the fastest non-motorized sport, and pros can accelerate faster than most street cars.

In her attempt, Mills accelerated from a standstill to over 100 km/h in less than three seconds.

Commenting on her record-breaking performance, Mills said, “I’m so glad I finally made it into the book!”

“I just hope this does a little bit of inspiration for those out there who have suffered injuries similar to mine and that they can use it as a source of inspiration to move on and achieve their own dreams and goals, whatever they are.” can be.’

Heather Mills, ex-wife of Sir Paul McCartney, has been officially recognized by the Guinness Book of World Records as the world’s fastest disabled skier

In 2010, at the age of 42, Mills began her competitive skiing career two years after her divorce from legendary Beatle Sir Paul McCartney. Pictured: Sir Paul McCartney and Heather Mills at the Vanity Fair Oscar Party in 2002

Amputee Mills uses a specially designed prosthetic leg to withstand the rigors of the ski slope, which she developed in partnership with the London Prosthetic Centre.

When he descended a 48-degree mountain slope at such a blistering pace, it was crucial that Mills had a prosthetic leg to withstand the pressure.

London Prosthetic Center director Abdo Haidar, who worked with Mills to design the heavy-duty prosthesis, praised Mills. “I’ve been an orthotist for many years and have made limbs for cycling and equestrian events in Paralympic running competitions, but nothing compares to skiing. It is the most difficult sport for an amputee.”

Mills said: “I’m so happy, ecstatic is an understatement!!! I love challenging people’s perceptions of disability and inspiring those who have doubts about their ability, disabled or not, to get off the sofa and do something that gives them the will to live that roller coaster of a lifetime.

“We must not let life fade away before it’s over, we only have a finite number of seconds, let’s live them.”