Football star Paul Pogba reportedly tried to pay his extortionists the £11million they were demanding in one go – but they had to settle for £85,000 (€100,000) in cash due to the Frenchman’s bank withdrawal limit.

The incident came when Pogba was reportedly dragged to a Paris apartment in March where they threatened him with assault rifles in part of an alleged plot to blackmail him.

The 29-year-old, who has won the World Cup with France, said the men wanted the money for ‘protection services’ stretching back 13 years, including for the time he spent in Manchester.

Pogba claims two armed men said they ‘protected him discreetly’ during a period that spanned more than a decade, including during two spells at Manchester United, the last of which ended earlier this year.

Reports from French news outlet RMC are claiming that Pogba paid around £85,000 in a bid to ‘save time’ and ‘satisfy the extortionists’ but his attempts saw those plotting against him demand the £11m again.

The Franceinfo news outlet, which has seen police files on the case, said Pogba was initially told to hand over £13m (€11m) by the armed men, who were wearing hoods, and branding MI6 assault rifles.

This was ‘protection money’ covering €1m (£860,000) a year, from the age of 16 when he first became a professional footballer, according to the enquiry source.

A statement signed by his lawyers, his mother Yeo Moriba and current agent Rafaela Pimenta, said that the videos ‘are unfortunately no surprise’ and were in addition to other ‘threats and extortion attempts’.

One such threat, Pogba reportedly told investigators, was to claim that he had asked a witch doctor to cast a spell on Paris Saint-Germain superstar and French team-mate Kylian Mbappe, something which Pogba denies doing.

Judicial sources in Paris confirmed on Sunday that an investigation for ‘attempted extortion in an organised gang’ has been opened. On Sunday night a source close to the case told the Franceinfo news outlet that Pogba’s ‘big brother and childhood friends’ are all named as suspects. 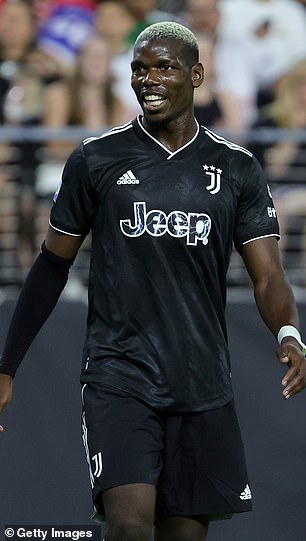 Paul Pogba reportedly paid £85,000 (pictured left) to his extortionists who were demanding £11m after they dragged him to a Paris apartment in March and threatened him with assault rifles in part of an alleged plot to blackmail him. This came after Pogba’s brother – Mathias Pogba – said he would share information on his brother in a bizarre video on Twitter (right)

In this file photo taken on June 25, 2017, Mathias Pogba (right) celebrates his goal with his brother Paul Pogba (left) during a friendly match in Medellin, Colombia

Pogba, 29, who has won the World Cup with France, said the men wanted the money for ‘protection services’ stretching back 13 years and also followed him to Manchester. Pictured: France midfield superstar Paul Pogba (top, second from right) poses before a football match in France in 2019 with brothers Florentin (first to Pogba’s left) and Mathias (to his right)

Pictured: Pogba celebrates winning the World Cup with his brothers and mother. Mathias Pogba has said he will share ‘explosive’ revelations about the former Man United midfielder in a Twitter video

But on Sunday night, Mathias – who had spells in English football at Wrexham, Crewe and Crawley Town – denied the claims from his better-known sibling in a furious Twitter outburst.

He wrote: ‘Paul, you really wanted to shut me up completely to lie and send me to prison, I suspected it now it’s true, my version of the facts happens and unlike you.’

On Sunday night, a judicial source said: ‘During various hearings, Paul Pogba was able to confide in investigators from the Central Office of Judicial Police Combating Organised Crime that he was trapped by childhood friends, and two hooded men armed with assault rifles.

Pogba said the gang wanted €13m – the equivalent of £11m – and had been threatening him for four months.

Acts of intimidation were carried out in Manchester in April, and later around the Italian city of Turin, where Pogba currently plays for Juventus.

Pogba (pictured) claims two armed men said they ‘protected him discreetly’ during a period that spanned more than a decade, including during two spells at Manchester United , the last of which ended earlier this year

Paul Pogba reportedly told investigators that the blackmailers threatened to claim he had asked a witch doctor to cast a spell on Paris Saint-Germain superstar and French teammate Kylian Mbappe (pictured), something which Pogba denies doing

The gang is also said to have taken Pogba to flat in the Paris suburb of Lagny-sur-Marne, where Pogba grew up, at the end of March. There, the gang members accused Pogba of not helping them financially since he became a professional player.

During police interviews, Paul Pogba said he had always been close to his childhood friends and helped them out financially when he could.

But in January he kicked one out his house in Manchester after discovering that the unidentified man had used Pogba’s credit card to steal €200,000 – the equivalent of £170,000.

Paul Pogba was born and raised in Lagny-sur-Marne along with two brothers – Mathias and Florentin, both of whom also play football professionally.

Mathias took to social media this weekend to promise ‘explosive revelations’ about his brother.

‘The French, English, Italian and Spanish public – in other words, the whole world – as well as my brother’s fans, and even more so the French team and Juventus, my brother’s team-mates and his sponsors deserve to know certain things,’ he said.

‘In order to make an informed decision if he deserves the admiration, respect and love of the public.

‘If he deserves his place in the French team and the honour of playing in the World Cup. If he deserves to be a starter at Juventus.

‘If he is a trustworthy person, that any player deserves to have at his side.’

Mathias Pogba also addressed his brother’s agent and lawyer, Rafaela Pimenta. Pimenta has taken over the handling of Paul Pogba’s career following the death of his former agent, Mino Raiola, in April.

Mathias Pogba has questioned her ability to hold the position.

He stated that he would let fans and players know about ‘her integrity, her professionalism… her loyalty’ so that they could decide whether she ‘deserves to represent them.’

Paul Pogba (pictured playing for Manchester United) claims two armed men said they ‘protected him discreetly’ during a period that spanned more than a decade, including during two spells at the Manchester club

Pogba concluded his video by referencing Kylian Mbappe, declaring he has ‘important things’ to say about the 23-year-old.

How the son of Guinean parents became Manchester United’s record signer, getting £89.3 million in 2016, and was awarded the Legion of Honour

Paul Pogba was born and raised in Lagny-sur-Marne to Guinean parents along with two brothers – Mathias and Florentin, both of whom also play football professionally.

The primarily central midfielder told FIFA.com, that former Brazilian forward Ronaldo ‘made him fall in love with football’.

He said: ‘I was enthralled by him as I used to play up front when I was younger.’

At just 16, Manchester United snapped him up before he went to Juventus on a free transfer in 2012, winning a Serie A, a Coppa Italia and two Supercoppa Italiana titles.

His star rose further and he won various acolades including the Legion of Honour, FIFA World Cup Best Young Player and Golden Boy.

He returned to Manchester in 2016 for a record £89.3 million, which was the highest fee paid by any English club until 2021. Pogba would go on to help United win the League Cup and Europa League in 2017.

In 2019, he married his wife Bolivian model, Maria Zulay Salaues, who he has two children with.

And would return to play with Juventus this year.

‘I will tell you very important things about him and there will be elements and many testimonies to confirm my words,’ Pogba said of Mbappe. ‘Everything could be explosive and make a lot of noise.’

However, Paul Pogba has claimed there is no story surrounding Mbappe despite his brother’s claims.

Paul Pogba’s lawyers, Yeo Moriba – who is also his mother – and Pimenta have since responded to Mathias’s threats.

‘Mathias Pogba’s recent statements on social networks are unfortunately not a surprise,’ they said. ‘They are in addition to threats and organised extortion attempts against Paul Pogba.’

According to two sources close to the Pogba family contacted by AFP, large sums of money are being demanded from Paul Pogba if he wants to avoid the dissemination of the allegedly compromising videos.

Pogba also explained to investigators that his blackmailers wanted to discredit him by claiming he asked a marabout, a holy man, to cast a spell on the Paris Saint-Germain and France star, Mbappe, which Pogba denies.

Later this evening, Mathias also took to Twitter after the reports in French media to take aim at his brother and say: ‘My little brother is finally starting to show his true face.’

The OCLCO is a unit within the judicial police tasked with investigating organised crime.

Paul Pogba is set to defend the World Cup he won with France in 2018 at the upcoming tournament in Qatar.

He re-joined the Serie A giants on a free transfer after his Manchester United contract expired earlier this summer.

He first arrived at Old Trafford from Le Havre as a 16-year-old in 2009 before being allowed to leave United on a free transfer and join Juventus in 2012.

He is expected to return to action next month. Pogba is married to the Bolivian model, Maria Zulay Salaues, and they have two children together.

https://www.dailymail.co.uk/sport/sportsnews/article-11159473/Paul-Pogba-paid-85-000-extortionists-demanding-11m-held-hostage.html?ns_mchannel=rss&ns_campaign=1490&ito=1490 Paul Pogba ‘paid £85,000 to extortionists who were demanding £11m and held him hostage’