A plea from the mother of murdered British backpacker Peter Falconio sparked a five-day police search at an outback well for his remains, more than two decades after his disappearance.

Joan Falconio, 75, has broken her long silence to ask for information about the location of her son’s body on his 50th birthday.

The grieving mother is still haunted by the loss of her son 21 years ago in the dead of night on a remote stretch of road between Alice Springs and Darwin.

Peter and his girlfriend Joanne Lees were in a camper van when they were pulled over by drug smuggler Bradley Murdoch, who shot Mr Falconio and attempted to kidnap Ms Lees.

She managed to escape and hid in the bush for hours before stopping a truck and sounding the alarm – but no trace of her boyfriend’s body was ever found.

Daily Mail Australia can reveal that police emptied an outback well in 2019 where it was feared Mr Falconio’s body was being dumped at a personal request from his mother. 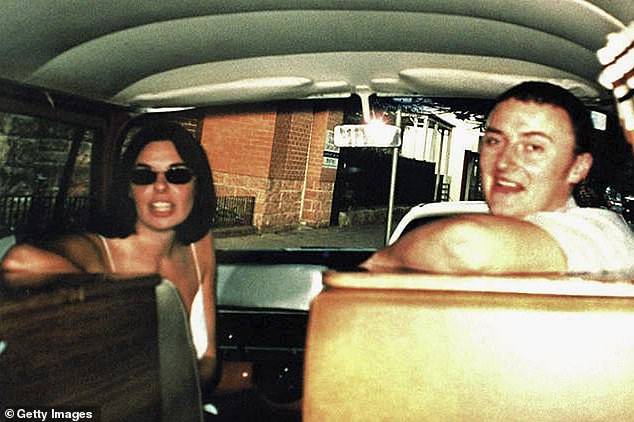 Peter and his girlfriend Joanne Lees were in a camper van when they were pulled over by drug smuggler Bradley Murdoch, who shot Mr Falconio and attempted to kidnap Ms Lees

But the five-day search was unsuccessful.

Now, Ms Falconio’s request for information has been backed by demands for Northern Territory Police to provide a $1 million reward to help revive the hunt and end the mystery.

“We want to bring Peter home, where he belongs, near his family,” Peter’s mother said on Friday. “Our pain is always with us. He was murdered 21 years ago when he was only 28.

“His life ended on July 14, 2001 on a lonely road – the Stuart Highway. Shot by the cowardly Murdoch who will not reveal where or what he did to him.”

She added: “Peter has a beautiful niece and two beautiful nephews who he has never seen or met.

“I appeal to anyone of conscience to help me – however small – tell me where he has been placed.”

Ms Falconio and husband Luciano, 80, spoke out after reliving the tragedy on Peter’s 50th birthday on Tuesday September 20.

Former girlfriend Joanne Lees is now 47 and lives in Huddersfield, Yorkshire, UK and still keeps in touch with Peter’s parents.

The couple were traveling through Australia in 2001 when Murdoch pulled up and signaled for them to stop, claiming flames were shooting out of the back of their van.

As Mr Falconio went around the back with Murdoch to inspect him, he was shot dead.

Murdoch then grabbed Ms. Lee’s, bound her with cable ties and tied her in the back of his ute.

Bradley Murdoch grabbed Joanne Lees, tied her with zip ties and laced her in the back of his ute

Joanne Lees managed to break free while disposing of Mr. Falconio’s body and their van, and hid in the bush to avoid Murdoch’s dog while he searched for her

She managed to break free as he disposed of Mr. Falconio’s body and their van, and hid in the bush to avoid Murdoch’s dog while he searched for her.

Murdoch eventually gave up and drove off with Mr Falconio’s body before Ms Lees flagged down a truck and was taken to a nearby Barrow Creek roadhouse.

The police hunt for Mr Falconio and his killer then began 21 years ago and eventually led to the arrest of Murdoch after Ms Lee’s t-shirt DNA matched his.

He is now serving life at Darwin Correctional Center after being convicted of murder – but has refused to give up where he placed Mr Falconio’s body.

Bradley Murdoch is believed to have hidden the remains somewhere in the vast desert between Alice Springs and Broome, 1,700 km away in Western Australia

Bradley Murdoch is eligible for parole in 10 years – but won’t walk free without revealing the location of Peter Falconio’s body under NT’s ‘no body, no release’ laws

Murdoch is eligible for parole in 10 years but will never go free without disclosing the whereabouts under the NT’s “no body, no release” laws.

He is believed to have hidden the remains somewhere in the vast desert between Alice Springs and Broome, 1,700km away in Western Australia.

Daily Mail Australia can reveal that in 2019 police emptied an outback well where it was feared Mr Falconio’s body was being dumped – but have found no trace of him.

Detectives were led to the site of the Neutral Junction cattle station, about 1 km from where Mr Falconio was shot, after an eyewitness said he had a ute like Murdoch’s there on the night of the attack seen.

A television crew led by Today Tonight reporter Frank Pangallo – now a South Australian state politician for the SA BEST Party – first explored the site in 2014, but the well contained 15m of water and was inaccessible.

But police returned to the site in 2019, following a personal plea from Mr Falconio’s mother, and conducted a full investigation… but turned up nothing.

“Ms Falconio contacted me and asked if I could persuade NT Police to conduct a full search of the well to take down the lead,” Mr Pangallo told Daily Mail Australia.

“Then I arranged an affidavit from the eyewitness, a truck driver who had been contracted by the cattle station, and sent it to senior NT police.

NT police found him credible and emptied the well in a five day operation in 2019 but unfortunately found nothing.

“It was the right thing for her and I applaud her efforts.”

Mr. Pangallo is now urging NT Police to offer the $1 million reward to trick someone into providing the key information needed.

“Murdoch doesn’t have the guts to confess his cowardly crime and he should be stewing behind bars if he’s not willing to tell the truth about what he did or where he left Peter that night,” he added .

‘Someone has to know where Peter is, or they might have information or memories that the police might find useful, no matter how insignificant they might find it.

“Joan, Luciano, Peter’s brothers – Mark, Nicholas and Paul – and their families deserve closure after all these years of grief and uncertainty.”

https://www.dailymail.co.uk/news/article-11241171/Peter-Falconio-Mother-Joan-begs-location-son-boyfriend-Joanne-Lees-revealed.html?ns_mchannel=rss&ns_campaign=1490&ito=1490 Peter Falconio: Mother Joan has asked for the whereabouts of her son, Joanne Lees’ boyfriend, to be revealed

Jack Grealish agrees to drink with Sportsmail's Graeme Souness... and wants Paul Pogba as a plus