The slain Philadelphia child known as the “Boy in the Box” finally has a headstone with his name after his identity was revealed last month.

A DNA breakthrough revealed the child victim of a brutal murder in the City of Brotherly Love in 1957 was Joseph Augustus Zarelli, 4.

On Friday, which would have celebrated Zarelli’s 70th birthday, the city updated the headstone dedicated to “America’s Unknown Child” to include his name and a personalized headstone with his picture and a prayer.

Zarelli’s family members, who have remained anonymous, told CBS they were caught off guard when investigators told them they were related to the “boy in the box.”

They said they will continue to press for more leads as police try to figure out how Zarelli – whose body was beaten and found stuffed in a cardboard box in the Fox Chase neighborhood – met his grisly end. 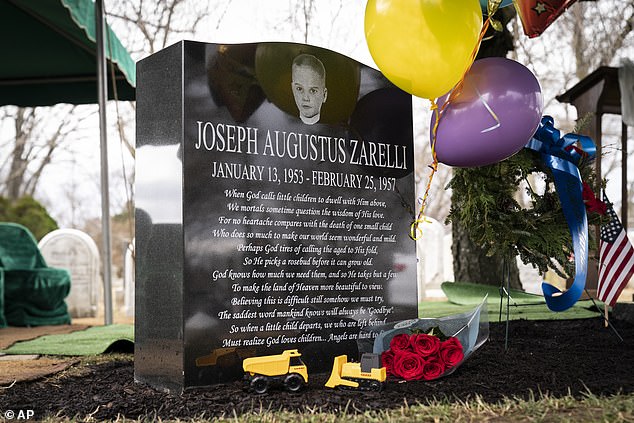 Joseph Augustus Zarelli, previously known only as Philadelphia’s “Boy in the Box,” received a fitting gravestone on Friday, his 70th birthday

Along with the headstone, officials updated the marker dedicated to “America’s Unknown Child” to bear the boy’s name (above).

Police composites show the likeness of Zarelli, who was beaten and found stuffed in a roadside box in Philadelphia in 1957

Friday’s gravestone dedication was held at Ivy Hill Cemetery in Mount Airy, where a gravestone for Zarelli was installed in 1998.

City officials and residents were present at the ceremony, offering cards, flowers and balloons in memory of the murdered four-year-old.

The murder shook the city on February 25, 1957, when his body was found naked in the box and showing signs of severe malnutrition, along with bruises all over his body and fatal head trauma.

The box had originally contained a cradle purchased from a JC Penney store in Upper Darby for $7.50.

A royal blue corduroy newsboy cap was found near the body, which police believe may have been tied to the killer. A recently washed and patched flannel blanket also covered the body, offering another clue.

Investigators have been extensively soliciting information from the public, but over the years the boy’s identity has remained a mystery, and the case has engaged Philadelphia and the nation.

Zarelli’s funeral service can be seen above. The Philadelphia Police Department followed many leads over the decades before DNA testing revealed his identity

Mourners gather at a headstone that reads “Heavenly Father bless this unknown boy” at the 1957 funeral.

Detectives followed and discarded thousands of leads – including that he was a Hungarian refugee, a boy kidnapped outside a Long Island supermarket in 1955, or that he was a host of other missing children.

They investigated a couple of traveling carnival workers and a family who ran a nearby nursing home, but ruled them out as suspects.

An Ohio woman claimed her mother bought the boy from his biological parents in 1954, held him in the basement of her home in suburban Philadelphia, and killed him in anger.

Authorities found her credible but couldn’t confirm her story – another dead end.

Police are believed to have used genealogical DNA research to identify the boy by searching public databases for distant relatives and reconstructing the family tree.

Officials said they had suspicions as to who was responsible for Zarelli’s death but said it would be “irresponsible” to release the information – or release his birth parents’ names because of their surviving relatives.

The child’s body was exhumed twice and DNA was extracted from both cases.

After DNA testing, a birth certificate finally revealed his age at the time of his death – he had turned four just a month before his body was found. It also named his birth father.

In 1998, the boy’s remains were transferred from Potter’s Field in Philadelphia to Ivy Hill Cemetery.

Last month, workers at Ivy Hill spoke out, expressing their gratitude that the victim’s headstone will soon bear the boy’s real name.

“I just wish the cops and all those long deceased involved were still here to see it because that was one of their goals and some of them said, ‘I hope they live long enough to see, like a name will be added there.”‘

https://www.dailymail.co.uk/news/article-11633067/Philadelphias-Boy-Box-FINALLY-gets-headstone-engraved-name.html?ns_mchannel=rss&ns_campaign=1490&ito=1490 Philadelphia’s “Boy in the Box” FINALLY gets a headstone with his name engraved on it