Framed portraits of some of Britain’s most notorious serial killers – including the Yorkshire Ripper, Rose West and Myra Hindley – adorned the bedroom wall of a true crime fan accused of murdering her boyfriend in his sleep, a court has heard.

Mother-of-one Shaye Groves is said to have thrust a dagger she kept in a bedside table 22 times into the body of her 25-year-old lover Frankie Fitzgerald during a “passionate” attack at her home in Leigh Park, Hampshire. on July 17 last year.

The juror in Groves’ murder trial was shown the twisted collection of portraits that prosecutors say hung on the wall of the 27-year-old’s bedroom.

Among them was a chilling image of murderess Myra Hindley with blood streaming from her eyes, American thugs Ted Bundy and Jeffrey Dahmer, and Gloucestershire-based serial killer Rose West. 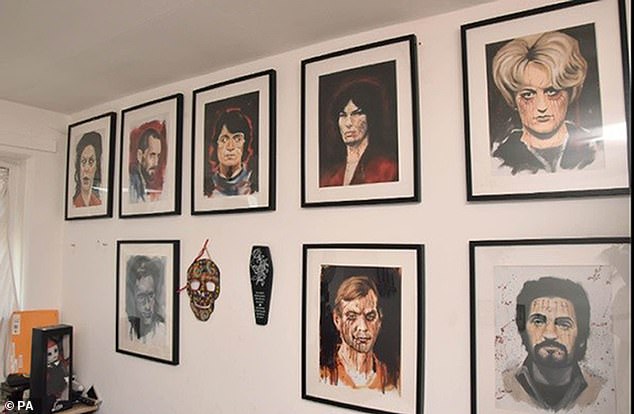 A wall of horror: The suspected killer Shaye Groves had portraits of some of the world’s most notorious serial killers on her wall, prosecutors have claimed

Groves, 27, is said to have stabbed her boyfriend Frankie Fitzgerald to death in his sleep in a crime of “passion”. She poses in front of a picture of Yorkshire Ripper, Peter Sutcliffe (left) and American Ted Bundy

Winchester Crown Court had previously heard Groves ‘giggling’ call a friend after she killed her lover, then showing off his body and saying ‘I finished him off’.

Vikki Baitup, a friend of Groves, told police she suspected Groves was “upset” by the “abusive” sexual nature of their relationship.

Groves denies murdering the young father by stabbing him 22 times in a “crime of passion”.

Ms Baitup, who testified at Winchester Crown Court, was shown exhibits of the dagger allegedly used in the murder and a Groves BB gun that could fire small ball bearings.

Ms Baitup examined the blade and said, “Yes, it belongs to Shaye, she keeps it in the bottom drawer by her bed.”

Ms Baitup also told the court Groves used to carry around a “combat blade” and “put it in her boot”.

The court has previously heard that Groves made up a “fake alibi” after the murder, inspired by tips from true crime documentaries, to avoid being caught following her alleged crime.

Photos of a BB gun firing ball bearings, which police said was hidden in a drawer in Grove’s bedroom, were also shown to the jury at Winchester Crown Court

Ms Baitup also told jurors the two talked “jokingly” about Mr Fitzgerald ending up “on the wall” as there was “room for him” alongside the serial killers who were hanging on it.

Earlier, prosecutors told jurors the defendant lied to police, telling officers Mr Fitzgerald raped her – and that Groves had previously threatened to post a sex tape of them on Facebook to “make his life a misery”.

TThe mother fabricated allegations that her boyfriend had abused and raped her and had previously threatened to do the same made life “a misery” by videos of the couple – who are said to have used cocaine together in the months before the murder – having sex.

However, jurors heard that Groves was “obsessed” with Mr Fitzgerald’s “performing in the bedroom”, with the couple’s sex life involving bondage, dominance, submission and masochism – and that the footage had shown the sexual acts were “consensual”.

Groves had even told Mr Fitzgerald that she could be aroused by sexual intercourse, in a note from the defendant, the court was told.

The defendant had also blackmailed another lover with a sextape by threatening to show the video to his new girlfriend if he didn’t do what she wanted – which was to drive the car into town and back for a night out, she claimed the prosecutor’s office.

Groves claimed to police that she was raped by Mr Fitzgerald (pictured). However, prosecutors argue that this was never the case and say the sex between the couple was consensual

Groves reportedly told her boyfriend in a written note to Mr Fitzgerald that he could wake her up for sex. She is pictured at her home before allegedly killing the 25-year-old

A note read in court read: “I, Shaye Groves, authorize Frankie Fitzgerald to arouse me by sexual intercourse beginning March 22 until further notice.”

The mother-of-one is said to have owned four “decorative” knives – depicting film villains Chuckie, Jigsaw and Pennywise – which she and Mr Fitzgerald used for the “knife game” in the bedroom.

Winchester Crown Court heard the couple had set up a camera in the bedroom to record them having sex – the footage Groves said was blackmailing lovers.

In her interview with police, which was played in court, Ms Baitup said: “She’s collecting evidence against everyone to see how she can use it as leverage.”

Ms Baitup also told officers Groves had a history of violence and recounted two occasions when she attacked Lauren White, who lived with her – once with nail clippers, causing her head to bleed.

Groves told police she was assaulted and raped by Mr Fitzgerald, but prosecutors said any sex between them was consensual and “they had a safe word.”

Jurors heard Ms Baitup tell police she thought Groves got a “thrill” from the alleged sexual abuse, of which she had clips.

Vikki Baitup, a friend of Groves, told police she suspected Groves was “upset” by the “abusive” sexual nature of their relationship. Mrs Baitup is pictured arriving at Winchester Crown Court on Tuesday

“I think Shaye has some kind of thrill or joy in being in the relationship,” she said.

“I got the impression that she was turned on by some of the abuse.”

In a later interview with police, Ms Baitup said Groves saw another man in a “balancing act” alongside Mr Fitzgerald. She told police: “It was so close that the two saw each other. Shaye played [them]. You never knew which one would show up.”

The jury heard that Groves “was not shy about speaking out about her sex life” – after reaching an agreement with Mr Fitzgerald she could be aroused “by intercourse until further notice” in a written note.

It was signed by Groves, Mr Fitzgerald and Ms Baitup as witnesses – who told police the two had taken up a cocaine addiction a few months before the murder.

Explaining Groves’ past violence to Ms White, Ms Baitup said she ‘mopped’ Ms White with nail clippers and left a ‘cut’ on her head – and her anger only subsided after she ‘saw a bit of blood’ – her calmed down ‘.

The court has previously heard that Groves made up a “fake alibi” after the murder, inspired by tips from true crime documentaries, to avoid being caught following her “crime of passion”.

A pathologist’s report read to the court explained that Mr Fitzgerald was stabbed 17 times in the chest, twice in other areas of the chest and three times in the neck – resulting in his death after ‘multiple perforations of the heart and lungs’ and ‘catastrophic blood loss’ .

Footage of officers arriving at the scene was also played to the court, which reported an “incredibly strong” smell of bleach in the bedroom.

Groves denies the murder and claims she acted in self-defense.

https://www.dailymail.co.uk/news/article-11648127/Pictured-Portraits-murderers-kept-bedroom-wall-giggling-killer-slaughtered-lover.html?ns_mchannel=rss&ns_campaign=1490&ito=1490 Pictured: portraits of the killers on the bedroom wall where the “giggling killer” slaughtered the lover