Brighton caused a stir in a brilliant 3-0 win against Liverpool thanks to a Solly March brace and a Danny Welbeck goal.

March struck shortly after the half-time break, before a second followed shortly afterwards. Welbeck then added the third with a brilliant goal to seal the game – once again revealing Liverpool’s weak defense.

Liverpool boss Jürgen Klopp apologized to the fans who had traveled with him after the humiliating result at the Amex.

After an entertaining Premier League clash Sportsmail Dan Bennett rates the players of both teams. 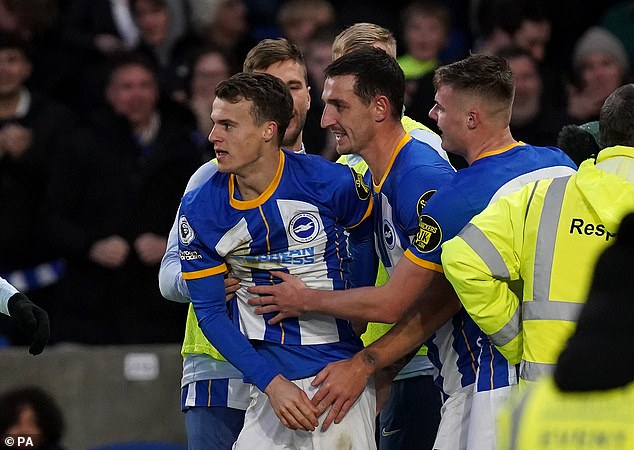 Robert Sanchez – Had little to do but managed well when tested, including defending from Salah when he found space down the right in the first half and diving at Gakpo’s feet to put him outside late in the game to keep. 7.

Pascal Gross – Not his preferred position but made a really good shift as a right-back. Kept perfectly still Oxlade-Chamberlain and Robertson and was also a threat at right flank. 7.

Lewis Dunk – Brighton’s dependable centre-back hardly made a mistake all game, making a couple of crucial blocks when Liverpool were under pressure and ensuring Cody Gakpo wasn’t in the game at all. 8th.

Levi Colwill – His ability to have the ball at his feet and play from behind is a huge asset for this Brighton side and he has done it expertly. Invited some Liverpool pressure towards the end of the second half with a couple of poor decisions but made a solid shift alongside dunk overall. 7.

Pervis Estupinan – Helped Mitoma thrive by supporting him on the left side and giving him the overlap option. Could have held the ball better on occasion but gave little joy to Salah on that side. 7.

Moses Caicedo – Another impressive performance from the sought-after midfielder who was instrumental in starting Brighton’s many attacks. No wonder the big clubs are circling. 8th.

Alexis MacAllister – Performing well in a deeper midfield role, pulling the strings and showing off his superb passing ability with multiple through balls to attackers. Used a matip error to start the move that led to the first goal. 8th.

Solly March – Fantastic two-goal performance from the winger. He brilliantly managed to position himself against Mitoma from the first minute before a fantastic finish shortly after put his side 2-0 up. Also assisted Welbeck’s late third with a nice flick-on. 9.

Adam Lallana – Effective playing in the No10 role. He played some nice through balls to those in front of him and his movement caused some confusion in Liverpool’s defence. 7.

Kaoru Mitoma – Excellent down the left flank and caused all sorts of problems for Liverpool, especially in the first half. Started the second while ending the first 45 minutes by getting on target and selecting March for his side’s opener. An absolutely great display. 9.

Evan Ferguson – Didn’t have much joy in the first half but came into his own in the second, setting up March for his second and leading the line well, diving in deeper to pick up the ball before going off. 7.

Roberto de Zerbi – A brilliant side selection from Brighton’s boss who is keen to capitalize on Liverpool through pace. Mac Allister’s slightly deeper use worked well and Brighton probably earned even more points than they did. 8th.

Alison – Was unsupported by those before him who gave him very little protection throughout the afternoon. He wasn’t really to blame for any of the goals, but he did put the ball under pressure on his team at times. 6.

Trent Alexander Arnold – Received a hot time against Mitoma, often leaving teammate Matip one-on-one with the winger. Maybe he followed his manager’s orders but should have helped more defensively. Has also contributed very little in attack, a big part of why he’s in the team. 5.

Joel Matip – A terrible performance from the centre-back. Had a nightmare at right back against Mitoma in the first half and was at fault for March’s goal, gifting the ball really badly to Mac Allister in his own half. 4.

Ibrahima Konat – Better than its central defense partner but has done very little to stem wave after wave of Brighton attacks. Hardly a sovereign performance by the French international. 6.

Andrew Robertson – Get defeated by March early in the game and has been caught out of position on several occasions. Didn’t play his defensive role properly and, like his opposing full-back, did little to threaten opponents. 5.

Jordan Henderson – Struggled to get a handle on the excellent duo of Caicedo and Mac Allister in midfield. A few nice passes here and there but looked slow and tedious against Brighton’s dynamic midfield. 6.

Fabinho – Like Henderson, he was guilty of being too slow to stop Brighton’s quick attacks, which often came through midfield. 5.

Thiago – Occasionally noticeable with a couple of decent passes but had very little impact on the game overall, particularly in the final third where he didn’t help create attacks like the Brighton midfielders did. 6.

Mohammed Salah – Wasteful with a couple of shots on goal in the first half and almost anonymous in the second. He looked dangerous a couple of times when he got on target but didn’t do enough for his side. 5.

Cody Gakpo – Barely involved in the game. Had a good opportunity when the ball fell to him a few yards later but otherwise you wouldn’t have known he was playing. 5.

Alex Oxlade-Chamberlain – Like Gakpo, hardly involved. Lacks the pace of Brighton’s wingers and barely caused Groß a problem before being substituted. 5.

Jürgen Klopp – His tactical set-up didn’t help his team very much, who repeatedly went ruthlessly on the offensive, also because the full-backs played so high. Didn’t change anything at half time which maybe he should have done. 4.

https://www.dailymail.co.uk/sport/football/article-11635569/PLAYER-RATINGS-Joel-Matip-dreadful-nightmare-afternoon-against-Brighton.html?ns_mchannel=rss&ns_campaign=1490&ito=1490 PLAYER RATING: Joel Matip was terrible on his nightmare afternoon against Brighton

Inside the Royal Family's favourite hotels, from London to Cornwall