Authorities swooped on the property on the Washington State University campus, in Pullman, just a few miles from the crime scene, and raided it for evidence after his arrest on December 30.

A new search warrant, made public on January 17, shows that police found several hair strands, including one animal hair, a black glove, a computer tower and one unnamed item with a collection of ‘dark red spots’.

They also hauled away a pillow with a ‘reddish/brown stain’ on it and the top and bottom of a mattress cover with ‘multiple stains’. 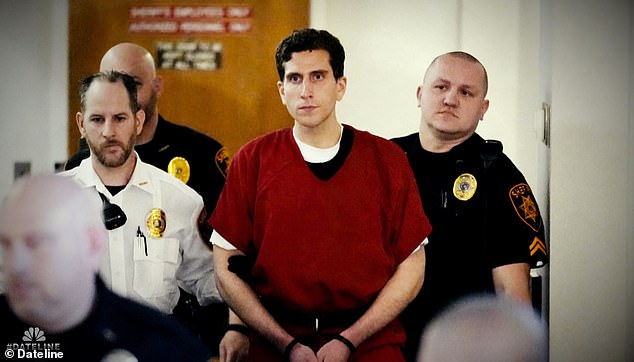 Forensic teams swooped on his property, less than 15 minutes from the house where the gristly murders took place

Investigators, who raided the property back in December, also collected receipts from Walmart and two Marshall’s receipts, as well as gathering dust from his vacuum.

Authorities initially sealed the search warrant for the murder suspect’s Washington home – arguing that releasing the details could ‘prematurely’ end the investigation.

However, the document has now been unsealed with the approval Whitman County Prosecutor Denis Tracy, who filed the motion on January 17.

Court documents show that eight strands of hair were recovered from the apartment, as well as a ‘possible’ animal hair.

They also recovered a Fire TV stick during their search. All the items are now being stored at the Washington State University Police department.

Authorities reportedly said they wanted to see if any hair had been ‘transferred’ onto Kohberger and then back to his apartment – including that of Kaylee Goncalves’ dog Murphy.

Murphy was found alive in Kaylee’s room by investigators who were called to the scene, and has now been returned to her ex-boyfriend.

The application also stated that the student’s home had a significant amount of blood from the victims – including ‘spatter and castoff blood’.

Investigators believe that it was likely that the killer would have had blood evidence on his body or clothing, and hoped to find trace evidence in Kohberger’s apartment.

However, they did not describe the results of any of the testing in the documents, and did not confirm if any hairs found matched to the victims of Kaylee’s dog.

His offices at Washington State University were also searched, but nothing was seized by officers.

Initially, the court ruled that the warrant should be sealed until March 1, claiming that if it were made public there would be a threat to ‘public safety’.

Jack DuCoeur and Kaylee Goncalves, pictured, shared custody of the dog after they split up

A new search warrant reveals that police found several hair strands, including one animal hair, a black glove, a computer tower and an item that was a ‘collection of dark red’ spotting

Kohberger’s apartment in Pullman, Washington, was combed by police for evidence into the ongoing investigation

Court documents filed the same day as his arrest state ‘compelling circumstances warrant the temporary sealing ordered in this matter.’

Kohberger, 28, appeared in court last week but has yet to enter a plea for the murders of Maddie Mogen, Kaylee Goncalves, Xana Kernodle and Ethan Chapin.

Authorities released the probable cause affidavit against Kohberger just before his first hearing in Moscow, Idaho, on January 5.

It reveals how Kohberger turned his phone off on the night of the murders in an attempt to cover his tracks before the murders – turning it off before getting too close to the property.

Kohberger even returned to the scene of the crime at 9am on November 13 – just hours after he allegedly committed the quadruple murders.

The documents say that the criminal justice graduate stalked the property in the late evening and early morning on each occasion – bar one.

Investigators believe that it was likely that the killer would have had blood evidence on his body or clothing, and hoped to find trace evidence in Kohberger’s apartment

Kaylee with her dog Murphy. Idaho police have just confirmed that Murphy was in the house when she was brutally murdered

Dylan Mortensen, pictured, did not call the authorities until six hours after she spotted the masked killer in the property

Officials have not revealed the exact dates that he canvassed the three-story property but confirmed that in August, he was pulled over just two minutes after leaving the area covered by the cell phone tower closest to the home.

A Latah County Sheriff’s deputy pulled him over on August 21 at 11.37pm as part of a traffic stop – in which he provided his number.

During the stop, which was recorded on the officer’s body cam, Kohberger was driving his white Hyundai Elantra.

The papers also included details on how Kohberger’s DNA was found on a knife sheath close to the bodies of Maddie Mogen and Kaylee Goncalves.

Authorities are still hunting for the murder weapon, with Moscow Chief of Police James Fry confirming they are yet to find it after Kohberger was arrested.

They confirmed they found DNA on a button of the sheath, which they then confirmed was Kohberger’s by digging through his trash.

Best friends Kaylee Goncalves and Madison Mogen, both 21, were murdered along with roommate Xana Kernodle and her boyfriend Ethan Chapin, both 20 in an off-campus home in Moscow

Many are questioning why it took her so long to raise the alarm, after hearing ‘crying’ and coming face to face with the killer. Pictured (L-R) Dylan Mortensen, Xana Kernodle, Bethany Funke, Kaylee Goncalves and Maddie Mogen

The officers were tasked with tracking Kohberger so they could arrest him as soon as a warrant was issued as well as trying to get hold of an object to compare DNA to a sample found at the scene.

He was also seen cleaning the inside and outside of his car, with the source adding that he didn’t ‘miss an inch’.

Kohberger was also reportedly seen taking out the trash to his neighbours bins at around 4am – with the contents being recovered by offices.

Unsealed court documents show the painstaking work done by officers, who matched the DNA found on the sheath to Kohberger’s by comparing it to his father’s DNA – which was a 99.9998 percent match.

The probable cause affidavit also revealed that Dylan Mortensen – who lived through the attack with Bethany Funke – heard several scuffles throughout the night and opened her door.

Mortensen told police that she saw a suspect dressed in all black with a mask covering his face and heard one of her housemates say, ‘there’s someone here’.

She also heard the suspect say, ‘it’s ok, I’m here to help you’ as he wandered the house committing the atrocity.

Officials have not revealed the exact dates that he canvassed the three-story property but confirmed that in August, he was pulled over just two minutes after leaving the area covered by the cell phone tower closest to the home

Police confirmed that a 911 call was made by one of the surviving roommates at 11:58am who requested help for an unconscious person – though it has not been confirmed who spoke to police.

It has raised the question of why Mortensen didn’t contact authorities sooner, with some arguing that she may have been ‘frozen’ by fear.

The roommate did not contact authorities for six hours, despite hearing several of her roommates in distress as well as witnessing the killer.

Mortensen told cops she was awoken at around 4am by what sounded like victim Kaylee Goncalves, 21, ‘playing with her dog’ in a third floor bedroom.

She said she looked out of her room but didn’t see anything, looking again on second occasion when she thought Xana Kernodle was crying.

Mortensen ‘stated she opened her door for the third time after she heard the crying and saw a figure clad in black clothing and a mask that covered the person’s mouth and nose walking towards her.

After the man moved towards her she said that she remained in a ‘frozen shock phase’ as he continued past her – but let her survive.

Kohberger previously insisted that he would be ‘exonerated’ to his lawyer in Pennsylvania.

MIKE KEEGAN: Substitutes for temporary concussion will NOT be tried in the Premier League

Salma Hayek, 56, is hardly recognizable in the new Instagram photo