Police have found the remains of a missing New York state English teacher who disappeared in Massachusetts five months ago.

Meghan Marohn, 42, of Delmar, New York, disappeared on March 27 while on a hiking vacation in Lee, Massachusetts — about 50 minutes from her home.

Her body was found Thursday in a heavily wooded area off Fox Drive. Authorities had previously found the year 10 English teacher’s car near Longcope Park near Church Street on March 29 – the day her family reported her missing.

Authorities, who are still searching the area, said the evidence gathered so far suggests the remains belong to Marohn, but the chief medical examiner’s office has the remains to make a positive identification.

The North Colonie School District, near Albany, released a statement, writing, “Meghan was a valued member of our school community and the news of her death affects us all.”

Her brother, Peter Naple, told News 10 the family was “heartbroken” and “the last 5 months have been a sad but somewhat hopeful time”. 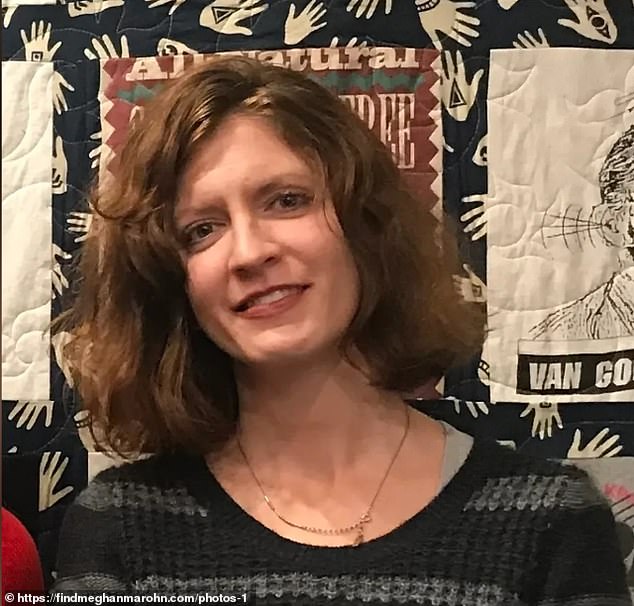 Meghan Marohn, 42, of Delmar, New York, disappeared on March 27 while on a hiking vacation in Lee, Massachusetts — about 50 minutes from her home

Her body was found Thursday in a heavily wooded area off Fox Drive. Authorities had previously found the year 10 English teacher’s car near Longcope Park near Church Street on March 29 – the day her family reported her missing

Marohn left her home in Delmar, New York, a suburb near Albany, for some time alone at the Red Lion Inn in Stockbridge, Massachusetts.

She arrived at the historic inn on March 24 and intended to return on the 30th, but has not been seen or heard from since.

Naple told DailyMail.com in mid-August the last time he spoke to his sister was March 26. He said they talked that afternoon and she seemed in good spirits and they texted again later that evening and she replied.

The next day she didn’t. He called the inn to find out if she’d gotten back safely, and when they checked her room, her things—books, candles, toiletries, clothes, toothbrush—were there, but she wasn’t.

Naple said his sister is familiar with the area and stayed at the Red Lion Inn years ago.

He also said the last person to see his sister was an employee at the inn, who gave her directions to Church Street around 10am on March 27.

When his calls and texts went unanswered, he filed a missing person’s report.

On March 29, a local resident reported that a car with New York license plates had been parked for two days in the dirt parking lot near the trailhead at Longcope Park, a 46-acre nature preserve off Church Street in Lee, Mass.

Police identified the vehicle as a black 2017 Subaru Imprezza that belonged to Mahron.

Data from her cell phone and GPS tracking showed she never made it to Longcope Park but showed her near private property. Naples thought that was strange.

“It was suspicious how her car was parked. It was pulled right into the exit point and blocked the entrance,” he said. “Her car keys, hotel key, school-issued laptop and a small stuffed animal she used to travel with were all missing.”

Search teams had been looking down the Housatonic River corridor from Lee to Stockbridge and the Glendale area, traveling in kayaks and using side-scan sonar and underwater cameras.

Search teams searched the corridor of the Housatonic River from Lee to Stockbridge and the Glendale area, kayaking and using side-scan sonar and underwater cameras, when she went missing

Authorities, who are still searching the area, said the evidence gathered so far suggests the remains belong to Marohn, but the chief medical examiner’s office needs to make a positive identification

‘Your credit cards were not used. Her bank account shows no activity,” he said at the time. “It’s like she vanished into thin air.”

When Marohn first went missing, Lee Police Chief Craig Desantis said there was “no evidence to suspect foul play and he would not speculate whether she had been stalked.”

‘I think, you [the police] believed she would be found, but as time has passed with the amount of searching and nothing has come, they see it differently,” Naple said. “They still haven’t said they suspect foul play and it’s just a missing persons case.”

Naple said he took six weeks off when she first went missing and continued to drive to the area where she was last seen from his home in Northville, New York, about two and a half hours from the trailhead.

“It was difficult for my father and I,” he said. “It happens every day. We have to find her and bring her home.”

He also said that the FBI’s Behavior Analysis Division was also implicated in his sister’s disappearance.

Chris Hedges, a writer friend of Marohn’s, described her as a “gifted poet and writer” with a “mass of thick red hair”. She was well read, she cared deeply about her students,” he said.

He said his friend only shopped at thrift stores and was someone who “never could handle the cruelty of the world.”

In July, he wrote a story about her disappearance that ran in The Berkshire Eagle.

The teacher taught English at Shaker High School in Colonie, near Albany

He also wrote that days before her disappearance, she confided to some friends that she had gone into hiding to escape a man who had “brutally harassed and intimidated her because she didn’t want to sleep with them.”

Naple told DailyMail.com his sister was on furlough from work over an incident with a married colleague that upset her.

“She briefly told me that there had been an incident involving a male colleague at work. When his progress was cut off, he didn’t like it,” Naple said. “It really worried her and she brought it to the attention of her superiors. This person is still working at the school.”

Naple said that person was questioned by police and “he checked himself out fine.”

“I don’t know the circumstances between them. I know she spoke to some friends who told her to go away for a few days because of what was happening with her colleague.’

He also said he didn’t think his sister would take her life.

“If Meghan did something like that, she would have left a message because she’s a writer,” he said.