This is the wild moment when a police officer smashed the window of a “sovereign citizen”‘s car after she refused to leave the vehicle.

The incident took place in Coffs Harbour, NSW, and began when an officer asked the woman to roll down her window.

She refused to turn it down all the way, and also refused to give her name or driver’s license before telling the officer he was “out of jurisdiction.”

He informed the so-called sovereign citizen that she was being stopped for driving without registration.

This prompted the driver and passenger, who filmed the exchange, to say it was them ‘Travelling’, not driving.

The encounter became increasingly heated as the two sovereign citizens refused to give the officer their particulars.

Eventually, the angry officer called for backup while telling the woman he would pull out the car window if she didn’t comply.

He also repeatedly stressed that they would be arrested if they did not provide information.

The passenger then says to the officer, “You have no authority here. From whom do you derive your authority? There is no sovereign in this country.

“Don’t you dare think you have authority here.”

Frustrated, the office grabbed the window and pulled it down with an impressive show of force before reaching through and opening the door.

He informed the sovereign citizens that they were under arrest. 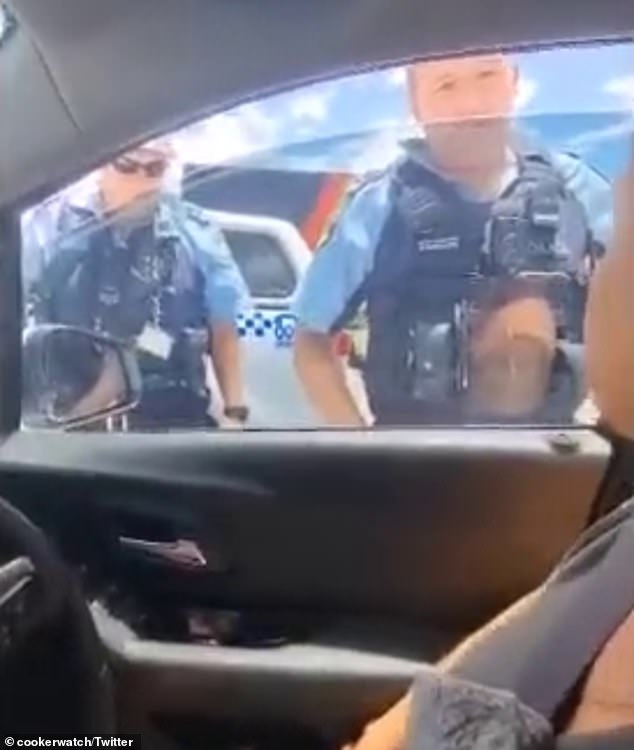 She refused to turn it down all the way, and also refused to give her name or driver’s license before telling the officer he was “out of jurisdiction.”

Frustrated, the office grabbed the window and pulled it down with an impressive show of force before reaching through and opening the door

He continues to rant at the police officer while he and his colleagues pull the sovereign citizens out of the car and arrest them.

NSW Police have been contacted for further information.

It is a criminal offense in all Australian states and territories to drive a motor vehicle on a road without a valid driver’s license. You must carry your driver’s license with you when driving and show it to a police officer if requested.

Sovereign Citizens are a loosely knit but growing movement of people who have connected primarily through social media during the pandemic.

They often believe that they — not judges, juries, law enforcement, or elected officials — should decide which laws to obey and which to ignore.

Most sovereign citizens also do not believe that they have to pay taxes.

As part of the strange ideology, they believe the law of the sea should be used to govern – even on land.

They also believe capital letters are used on birth certificates to make individuals a legal entity rather than a sovereign person.

https://www.dailymail.co.uk/news/article-11651089/Cops-smash-sovereign-citizens-car-window-Coffs-Harbour-NSW-refused-leave-vehicle.html?ns_mchannel=rss&ns_campaign=1490&ito=1490 Police officers smash the car window of a Sovereign citizen in Coffs Harbor, NSW after she refused to exit the vehicle