By Jack Newman For Mailonline

Pope Francis has declared that humanity is witnessing the outbreak of World War III.

In his address to Polish-speaking pilgrims at the end of his weekly audience at the Vatican yesterday, the Pope encouraged prayer for the people of Ukraine “in a special way”.

He said: “Tomorrow you will remember the anniversary of the outbreak of World War II, which so painfully scarred the Polish nation.

“Today we are experiencing the third.

“May the memory of past experiences spur you on to cultivate peace within yourself, in families, and in social and international life.” 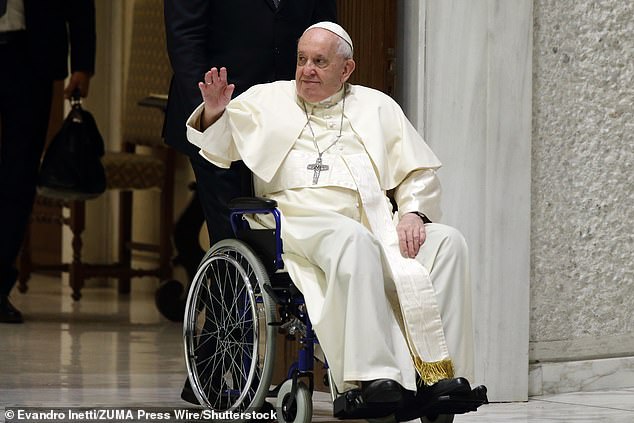 In April, Francis said humanity is moving towards World War III as if it were “inevitable” and he has frequently warned of an impending global conflict.

It comes as the Vatican struggled to defend Francis from accusations that he wasn’t tough enough on Russia over his invasion of Ukraine.

The Church said the pope clearly viewed the war started by Moscow as “pointless, repugnant and outrageous”.

During an audience a day earlier at the Vatican, Francis had described a national Russian TV commentator who had been killed by a car bomb in Moscow as a “poor girl”.

Debris is seen at the site of a destroyed school after Russian shelling in Druzhkivka, Donetsk

Russia has accused Ukraine’s secret service of involvement in the bombing, which Kyiv denies.

In his remarks, Francis also said that orphans in Ukraine and Russia are among the “innocents” who are victims of the “madness of war.”

The Vatican struggled to defend Francis from accusations that he didn’t hit Russia hard enough over his invasion of Ukraine (Putin pictured yesterday).

A Vatican statement said: “In recent days, public discussions have arisen about the political significance that can be ascribed to Francis’ statements.

“The Holy Father’s words on this dramatic issue should be read as a voice raised in defense of human life and the values ​​associated with it, and not as a political position,” the Vatican said.

“Regarding the wide-ranging war in Ukraine started by the Russian Federation, the interventions of the Holy Father Francis are clear and unequivocal, condemning it as morally unjust, unacceptable, barbaric, senseless, repugnant and outrageous.”

On the day Ukraine condemned the pope’s remarks, the head of the Russian Orthodox Church canceled a meeting with him scheduled for September.

Francis has said he wants to go to Ukraine if it could further the cause of peace, but logistics have made the trip impossible for the 85-year-old pope, who has mobility problems.

Dan James is unlikely to complete the move to Tottenham