Liz Truss’ Wikipedia page has been blocked today for “vandalism” after unscrupulous editors swapped out her photos for random celebrities on the day of her coronation as Britain’s next prime minister.

Pranksters ignored the site’s terms of service as they targeted the new Tory leader’s official profile, before the site was eventually “locked down” to prevent further malicious changes.

Wikipedia later announced at around 12.15pm that the PM-in-waiting profile had been granted extended protections until September 7 to stamp out “vandalism”.

According to Wikipedia’s official rules, changes on Mrs. Truss’ page are only made if a user has been registered for more than 30 days and has made more than 500 changes to existing articles. 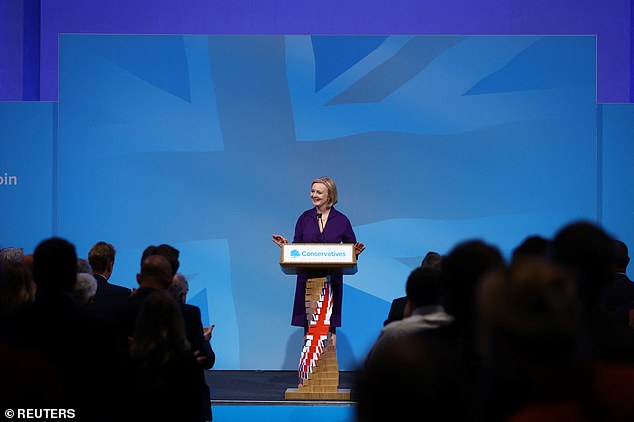 Liz Truss, who was announced today as the new Tory leader, received a warm welcome as she said she was “honoured” to be given the job

Ms Truss’ official Wikipedia page instead featured a picture of professional cleaner Kim Woodburn, who was broadcasting the Channel 4 hit How Clean Is Your House?

It comes after comedian Joe Lycett sparked critics’ fury after mockingly applauding Ms Truss and describing himself as “incredibly right-wing”.

Ms Truss, 47, took the opportunity on Laura Kuenssberg’s first flagship political Sunday show to promise “immediate” action to help Brits with energy bills if she were confirmed as Tory leader.

But her interview was followed by sarcastic applause from Lycett, who claimed to be “very right-wing” despite his frequent criticism of the Tory party and the government.

A senior Tory party source said: “This is supposed to be a serious political programme. I think it made Laura Kuenssberg look stupid… I think it’s absurd.

“How could this be right for the BBC? If I were the BBC I would apologize and say we were wrong, we made a mistake and we will be a serious political program again.

And after announcing that Liz Truss would be the next Prime Minister and Conservative Party leader, Lycett tweeted: “Yes @trussliz absolutely smashed it babe!!!”

Ms Truss is taking the helm of a country mired in a cost-of-living crisis after overcoming the former chancellor’s challenge with the support of 81,326 party members, compared to Mr Sunak’s 60,399.

The final winning margin was lower than polls predicted – and lower than that of Boris Johnson, Theresa May and David Cameron.

The new Conservative leader vowed to be “brave” about cutting taxes and reviving the economy after beating Rishi Sunak in the Tory leadership contest today.

She said it was an “honour” to be the new leader of “the largest political party in the world”. “I know our beliefs resonate with the British people,” she said.

Alluding to the upcoming general election, she added: “We’re going to give the Conservative Party a big win in 2024.”

Ms Truss also paid tribute to her “friend” Boris Johnson, who will formally hand over power to her tomorrow, saying he “done Brexit, crushed Jeremy Corbyn, introduced the vaccine and stood up to Vladimir Putin”.

Mr Johnson tweeted his congratulations, saying Ms Truss had “the right plan to address the cost of living crisis, unite our party and continue the great work of uniting and leveling our country”.

There seemed little warmth between the contestants in the hall as they sat a seat apart and awaited the result.

But Mr Sunak – who is not expected to be offered a big job in the new government – called for unity.

“It is right that we now unite behind new Prime Minister Liz Truss as she leads the country through difficult times,” he said.

Unlike Boris Johnson and Jeremy Hunt in 2019, the two candidates were sitting separately at the QEII center in Westminster ahead of the announcement this afternoon.

https://www.dailymail.co.uk/news/article-11181473/Pranksters-target-Liz-Trusss-Wikipedia-swap-photographs-page-locked.html?ns_mchannel=rss&ns_campaign=1490&ito=1490 Pranksters target Liz Truss’ Wikipedia and swap their photos before the site is “banned.”