Peta Murgatroyd showed off her growing baby bump during a photoshoot for her own line of Peta Jane tanning products on Thursday.

Earlier this week, Peta and her husband Maksim Chmerkovskiy – who is also a professional dancer – announced they were expecting their second child.

The New Zealand-born DWTS regular gave fans a glimpse of her stomach as she posed for two profile shots in a green bikini amidst a lush tropical landscape. 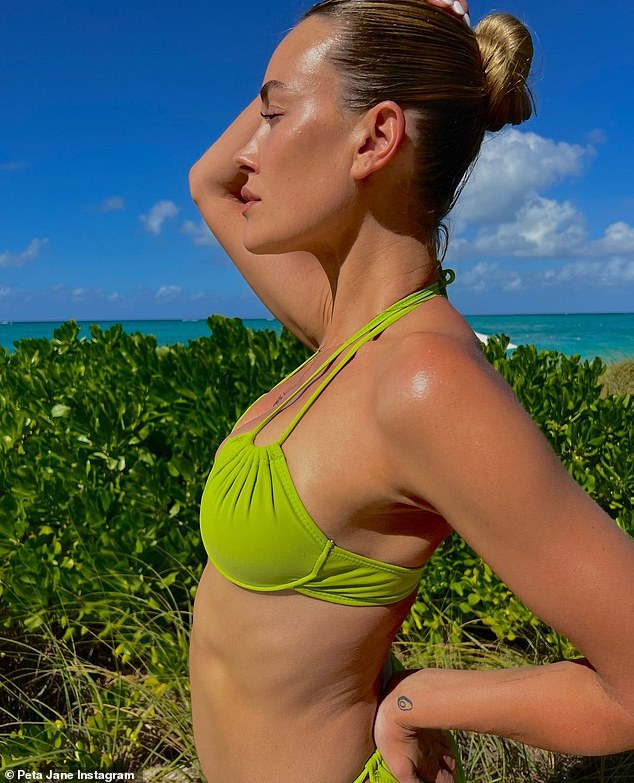 Baby on the way: Peta Murgatroyd showed off her growing baby bump during a photoshoot for her own line of Peta Jane tanning products on Thursday

The images were posted to her brand’s Instagram with the caption, “Our founder, Peta, wears our tanning mousse in Medium on her body and our tanning mist on her face for a quick makeup-free beach look!”.

The 36-year-old entrepreneur is her own best promoter of her products and has been promoting the campaign via her own Instagram account while preparing for the campaign.

Peta shared seven short videos on her personal Instagram story while she was doing her hair and makeup.

In the first short clip, Peta shared a view of New York City while waving out her window, captioning “Oh how I missed you :)”.

Healthy Pregnancy: Earlier this week, Peta and her husband Maksim Chmerkovskiy announced that they were expecting their second child

Back in NYC: Peta started her behind-the-scenes videos with a short clip showing that she’s in New York City

Illness: The mother-to-be flashed a peace sign as she updated her fans on how she was feeling

In another short boomerang, Peta wore a beige turtleneck and matching coat as she gestured a peace sign that read, “Car sick already… Pregnancy (monkey covers eyes emoji)” toward the camera.

The next video detailed her makeup process as her stylist added white highlights at the base of her nose on each cheek. Peta captioned the video “I love a good cake”.

She then showed off the final stages of her makeup process, with her hair held back in a large clip as the stylist finished her foundation.

Makeup Process: Peta documented her makeup process as her stylist added white highlights to her cheeks at the base of her nose. She added the caption above the video: “I love a good cake”

Almost done: Using a large black clip holding her hair back, the stylist finished off her eyes and foundation

After her makeup and hair were done, Peta played with her bouncy locks for the camera in a white gown.

She finished off the look with a busty black top before sharing the final results.

In the last video, the beauty stunned in the low-cut push-up top.

Peta added a laughing “LOL” emoji as she humorously captioned the pic: “Telling my titties to calm…”

Volume: Peta played with her bouncy locks for the camera in a white robe

With all her glamour: In the final look, she added a busty black top with a laughing “LOL” emoji next to the caption “Telling my titties to calm…”.

The dancer lifted her cream sweater to show off her growing belly in the latest video documenting her photoshoot, and included a picture of a cheeseburger alongside the caption, “Poppin.”

Although Peta and Maksim welcomed their son Shai in 2017, she has been open about her fertility struggles.

Peta announced earlier this week, “After 2 years of constant struggle and heartache, 3 miscarriages and a failed embryo transfer…we have a healthy bun in the oven.”

One last shot: In the behind-the-scenes finale, Peta posed for a selfie in the mirror, wearing a cream sweater and sweatpants while lifting her top to reveal her growing bump

Funny girl: The mom-to-be added a picture of a cheeseburger alongside the caption “Poppin.”

Peta was about to try a second round of in vitro fertilization when she received the news that she had become pregnant.

“I didn’t even know I was pregnant until I got really sick. I danced through Dancing With The Stars with it,” she said.

“I was feeling weird, feeling a little sick and a little bloated and I didn’t want to test for weeks,” Peta admitted openly.

Peta, who has suffered three miscarriages, said: “It was more like, ‘Okay, let’s see what happens, because I went through this four more times and it didn’t work. So I was very skeptical. I didn’t even tell Maks for a while.”

Extension of your family! The duo welcomed their son Shai in 2017. Peta has been open about her fertility struggles – pictured in 2022

https://www.dailymail.co.uk/tvshowbiz/article-11655905/Pregnant-Peta-Murgatroyd-puts-growing-baby-bump-display-photo-shoot-brand.html?ns_mchannel=rss&ns_campaign=1490&ito=1490 Pregnant Peta Murgatroyd shows off her growing baby bump in a photoshoot for her own brand

Is Fortnite getting a first-person mode?