English rugby’s financial crisis has been exposed after an investigation by the Mail on Sunday revealed Premiership clubs have racked up more than £500m in debt.

With the future of Worcester Warriors in serious doubt just five days before the new league season, it can also be shown that London Irish, Newcastle and Wasps have also admitted any fears about whether they can continue to operate as viable businesses.

A detailed analysis of clubs’ most recent financial accounts also revealed that Premiership clubs owed more than £36m in taxes, with just two of the 13 clubs having any credit with HMRC. 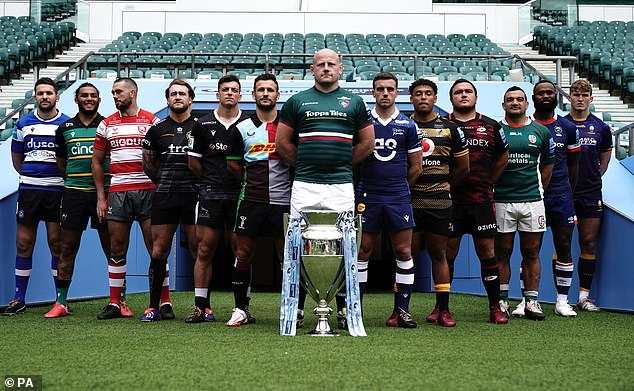 The top flight lost a total of £24m in the last financial year despite receiving substantial government Covid loans to help it cope with the financial backlash of postponed games and a temporary crowd ban.

Such measures are hitting the domestic game hard, but sports finance experts say the problems predate the pandemic and warned clubs could go under without radical changes.

“Covid has accelerated the situation but these numbers are consistent with what the numbers were telling us a few years ago. And what we’ve found many times during our research is that if you just keep doing the same things, that situation becomes the status quo.

“The product is still attractive enough to survive and fans will continue to look at it. But unless you seriously change governance practices at Premiership rugby level and introduce cost control measures beyond the salary cap, things will just continue as they are.

The MoS has audited the accounts of the 13 Premiership clubs for the year ending 30 June 2021, with the exception of Worcester, who are yet to publish figures for this year and are facing a winding-up petition over an unpaid £6million tax bill is. We used their accounts for the previous financial year.

The clubs’ total combined debt is £509m, with a combined net debt of £105m after assets are taken into account. Wasps have accumulated the largest gross debt at £112.3m, followed by Bristol at £51.2m and Newcastle at £39m.

Eight clubs made a loss for the year in their most recent accounts, with Exeter and Wasps both posting operating losses of £8m, while Saracens recorded £4.6m and Worcester £4m.

Newcastle recorded the biggest gain of £3.4million, but with the caveat that they had included a “significant” government Covid loan in the calculation.

Wasps also recorded the largest amount of deferred tax at £9.5m, while Leicester reported the second highest at £8.4m.

Additionally, in May, Wasps defaulted on 6.5 per cent interest payments to investors who lent the club a total of £35m via a private loan linked to the purchase of a 32,000-seat stadium in Coventry. According to reports this week, the club had received a refinancing offer that would allow them to repay bondholders.

A statement on the club’s accounts said: “[Owner] Derek Richardson is said to be providing financial support for the foreseeable future. However, the Directors have concluded that a material uncertainty exists which may cast doubt on the Group’s and parent company’s ability to continue as a going concern.’

Only five clubs turned a profit last year – and several only after receiving Sport Winter Survival Package loans from the Department for Culture, Media and Sport. But they have faced a number of clubs with repayments of up to £800,000 a year.

Most clubs are yet to feel any loans after the 2025 repayment holiday, while some have committed to servicing the loan for 20 years.

Newcastle’s accounts said: “Most of the debt is owed to majority shareholder Semore Kurdi, who has confirmed his willingness not to draw on this debt, to meet the day-to-day working needs of the group and to continue to invest in the long-term future the group.

‘Uncertainties related to operating profitability and cash flows indicate the existence of a material uncertainty that could cast doubt on the Group’s ability to continue as a going concern.’

The directors of London Irish said in their financial statements: “The Company depends on the continued support of London Irish Consortium Limited through its ultimate controlling party, Powerday plc, which would indicate that we need to recognize that there is a material uncertainty as to the ability of the company to continue as a going concern.’

Irish, Newcastle and Wasps have indeed all disclosed concerns about their going concern viability in their last three financial statements, dating back to those filed before the pandemic hit.

Worcester, who is struggling to avoid managing a £6million tax bill, is yet to release accounts for 2021 but figures for the previous season showed an annual loss of £4million.

Their owners, who are said to be in negotiations with buyers for the club, began paying player and staff wages on Friday after missing Wednesday’s paycheck.

Whilst most Premiership clubs rely on the goodwill of their owners, they are reaping significant revenue from the broadcasting deal signed with BT Sport, which is reportedly worth £4million a season.

Plumley said the league could have gotten more value from the deal and suggested more of it was shared out among the Premiership to help secure the future of smaller clubs.

He also highlighted the £200m stake private equity firm CVC had taken in the league and questioned whether it had been reinvested with a view to the clubs’ long-term sustainability. He cited the gradual growth of Exeter Chiefs as an example of how to buck the general approach.

“The challenge is when the club gets an equity injection, where does that money go,” he said. “Most of the time we see money flowing back into player wages.

“You have to look for ways to really use it to become sustainable, rather than chasing that short-term success.”