Prince Charles has said he is “grateful” to the African and Caribbean communities in the UK for being “open” with him about the issues they face.

The Prince of Wales guest edited the latest edition of Britain’s most prominent black newspaper, The Voice.

To mark the 40th anniversary, the future king took over the editing of the newspaper, which also features interviews with Baroness Doreen Lawrence and Idris Elba. 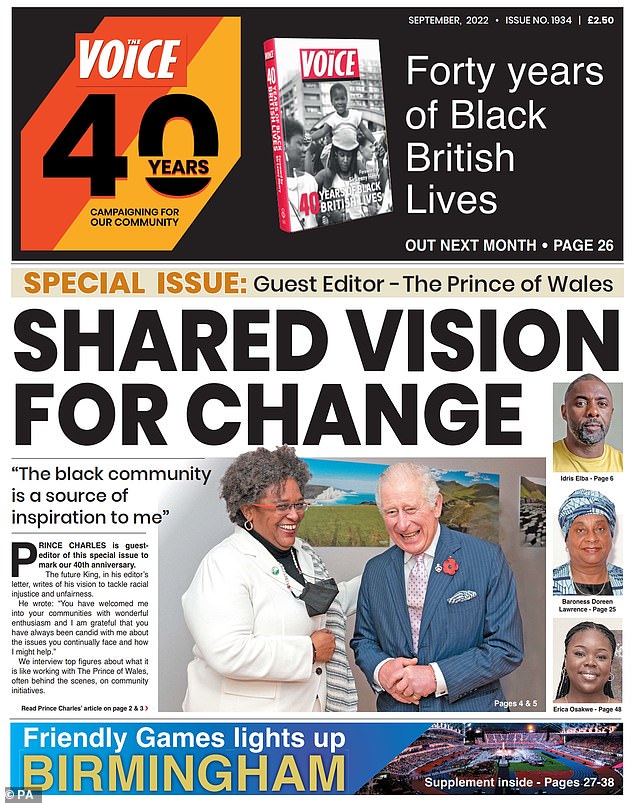 Guest editor of The Voice newspaper to mark his 40th anniversary, Prince Charles said he was “so touched” when asked to take the helm of the “institution”.

The Prince of Wales and Baroness Lawrence are expected to announce details of a bursary launched by their respective charities in memory of Stephen Lawrence, who was murdered in a racist attack in 1993 (pictured at a reception celebrating the Commonwealth -Diaspora of the United Kingdom in June 2022 with Diane Louise Jordan)

In his letter to the editor, Charles wrote about his goal of fighting racial injustice in society.

He wrote, “You have welcomed me into your communities with wonderful enthusiasm, and I am grateful that you have always been open with me about the issues you continually face and how I could help you.”

He added, “The black community is a source of inspiration for me.”

Baroness Lawrence is expected to provide details of a new grant launched by the Stephen Lawrence Foundation and Prince Charles in the newspaper’s special edition.

The year-long diploma program commemorates the life of aspiring architect Stephen Lawrence, who was killed in a racist attack in south-east London in 1993.

The heir to the throne has often paid tribute to the teenager who was murdered while waiting for a bus, who shared Charles’ love of architecture.

In April, the Prince invited Baroness Lawrence to Dumfries House in Scotland to discuss how his charities could work with their foundation.

The anniversary edition of The Voice includes an article written by the guest editor himself as well as an interview with Hollywood actor Idris Elba.

In the play, he talks about how The Prince’s Trust gave him a bursary when he was 16, which he said “opened doors” that changed his life.

After being asked to edit the paper, the Prince of Wales said he was “touched” and described the publication as “an institution,” reports The Guardian.

Paulette Simpson, Editor-in-Chief of The Voice said: “The Voice is an integral part of the black community and through their voices has shared authentic stories about the lived experience of black people over the past four decades.

“We are delighted that through his engagement at this special time, the Prince of Wales is recognizing The Voice’s role in its efforts over the past 40 years to create a more inclusive society and is highlighting issues he has supported.”

https://www.dailymail.co.uk/femail/article-11166339/Prince-Charles-guest-edits-Voice-says-hes-grateful-African-Carribean-communities.html?ns_mchannel=rss&ns_campaign=1490&ito=1490 Prince Charles is guest editor of The Voice and says he is “grateful” to the African and Caribbean communities.

The Adelaide family say Daydream Island, the Whitsundays resort in Queensland, is a rip-off