The Iranian regime has used Prince Harry’s confession that he killed 25 Taliban in Afghanistan to take aim at Britain amid the escalating row over the execution of Alireza Akbari.

In a string of tweets criticising Britain’s outrage over the killing of the British-Iranian dual national who was accused of spying, Iran claimed the country was ‘in no position to preach’.

The official Twitter account of the Iran Foreign Ministry accused the Duke of Sussex of showing no remorse over the killings of ‘innocent’ lives and accused Britain of allowing this ‘war crime’.

It said: ‘The British regime, whose royal family member, sees the killing of 25 innocent people as removal of chess pieces and has no regrets over the issue, and those who turn a blind eye to this war crime, are in no position to preach others on human rights.’

The post was referring to a controversial passage about the death count from Harry’s new memoir Spare which is already the subject of a mounting backlash. 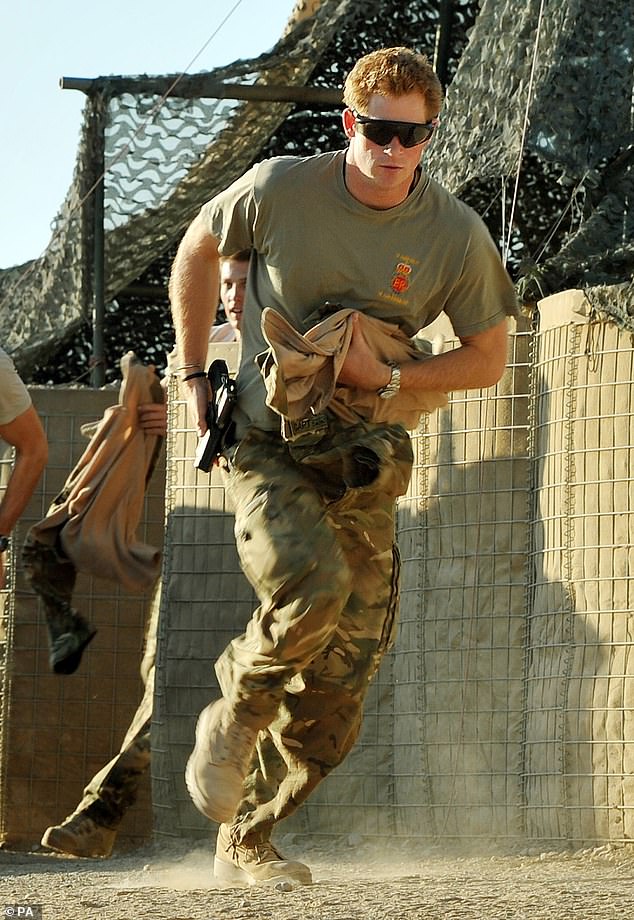 Prince Harry used Spare to confess that he killed 25 Taliban in Afghanistan. The Duke is pictured on patrol during his deployment in 2012 (above)

The official Twitter account (pictured) of the Iran Foreign Ministry accused the Duke of Sussex of showing no remorse over the killings of ‘innocent’ lives and accused Britain of allowing this ‘war crime’. ‘The British regime, whose royal family member, sees the killing of 25 innocent people as removal of chess pieces and has no regrets over the issue, and those who turn a blind eye to this war crime, are in no position to preach others on human rights,’ it said

His comments, which have also sparked security fears, have already provided the Taliban and extremist Anjem Choudary with ammunition to spout propaganda against British troops.

The former soldier used his book to detail how he had gunned down 25 militants, feeling neither satisfaction nor shame about his actions while serving in Afghanistan some 10 years ago.

He added that to in order deal with the incidents he dehumanised his victims by seeing them as ‘chess pieces’ and not people.

The passage was seized on by the Iranian regime as tensions between Tehran and London escalate in the wake of Akbari’s execution.

Akbari, 61, had moved to the UK with an investment visa and had become a naturalised citizen here but was lured back to Iran by the security services three years ago.

But the ex-deputy Iranian defence minister was arrested in 2019 and convicted of spying for the UK – a charge which he denied.

His death last week has caused outrage in Britain with Prime Minister Rishi Sunak calling it a ‘callous and cowardly act, carried out by a barbaric regime’.

Harry’s comments, which have also sparked security fears, have already provided the Taliban and extremist Anjem Choudary with ammunition to spout propaganda against British troops

The UK is now considering designating Iran’s Revolutionary Guards, the most powerful wing of its military, as a terrorist organisation in a sign of its hardening stance towards the Islamic republic.

In the string of Tweets, the Iran Foreign Ministry branded Britain’s ‘uproar and the support of some European self-proclaimed defenders of human rights’ as a ‘sign of their evasion and violation of law’.

It added: ‘Britain’s encroachment on the national security of the Islamic republic of Iran has been met with a decisive response from the Iranian intelligence &Judiciary.’

Tensions between the West and Iran are already running high over Tehran’s crackdown on nationwide protests for women’s right – as well as its support of Russia’s invasion of Ukraine with drones.

Iran has arrested at least 14,000 people in the wave of protests sparked by the September 16 death in custody of Mahsa Amini, a 22-year-old Iranian Kurdish woman who had been arrested for allegedly breaching the strict dress code for women.

Journalists, filmmakers, lawyers and activists have been arrested, and several executions have been reported as well as the deaths of hundreds of protesters in the clashes between Iran’s security forces.

Meanwhile, the regime has been arming Russia with Iranian-made suicide drones which have been causing havoc in Ukraine. Moscow has used them against civilian infrastructure, such as power stations, and on civilian buildings.

Tensions between the West and Iran are already running high over Tehran’s crackdown on nationwide protests for women’s right. Pictured: Protesters are seen in Tehran in September

The Iranian regime has been arming Russia with Iranian-made suicide drones (pictured) which have been causing havoc in Ukraine. Moscow has used them against civilian infrastructure, such as power stations, and on civilian buildings

Harry spent a decade in the British Army before taking up full-time royal duties in 2015. During that time, he did two tours of Afghanistan.

The prince was first deployed to Helmand province as a forward air controller in 2007, but his first tour of duty was cut short.

He returned in 2012, by which time he was responsible for firing a £45million Apache helicopter’s 30mm cannon and Hellfire missiles.

Spare is the first time he has specified the number of insurgents he personally killed during his time in Afghanistan. The Prince said that he flew on six missions that resulted in the ‘taking of human lives’ in his autobiography.

Harry, who was known as ‘Captain Wales’ in the military, wrote that he did not think of those killed ‘as people’ but instead ‘chess pieces’ he had taken off the board.

‘You can’t kill people if you see them as people’, he wrote. Instead, he said he saw them as ‘chess pieces removed from the board’… as ‘bad guys eliminated’.

Tehran is not the only brutal regime in the Middle East to have criticised Harry for his confession, after the Taliban themselves slammed the Prince earlier this month.

Speaking to MailOnline, the militants branded him a ‘big mouth loser’ after his revelation, and stressed that while their fighters were the ultimate victors of the conflict in Afghanistan, Harry had ‘fled to his grandmother’s palace’ and is now struggling to maintain a place in the Royal Family.

Taliban commander Molavi Agha Gol, 32, said that he thought Harry was attention seeking with his book and boasted that the ‘chess pieces’ had taken over the board following the 2021 withdrawal of international troops.

Speaking from a checkpoint outside the town of Islam Qala on the border with Iran, he said: ‘I do not even believe what he said about the Mujahidin. He is a loser and scared to go to a combat zone. We made history by kicking him and his army out of our homeland and he should be very angry about that.’

He added: ‘Do not believe whatever losers tell you. I see news about him a lot on my Facebook feed and really think he’s gone mad and needs a doctor immediately.

‘Even if he believes [that he killed 25 Taliban], our martyred Mujahidin are in heaven but his invading friends are burning in Hell and I really hope I was in Helmand when he was there, to make him understand what real chess pieces are.

‘If he’s a real man and not a f***ing loser, come to Afghanistan again.’

An official in the Taliban’s ministry for the propagation of virtue and the prevention of vice, said in a statement: ‘Pieces of chess are now in power and he’s struggling to maintain his place within his own family.’

Abul Qahar Balkhi, spokesman for the Taliban ministry of foreign affairs, said Prince Harry’s comments were ‘a microcosm of the trauma experienced by Afghans at the hands of occupation forces’.

Molavi Keramudin, a Taliban commander in the central city of Ghor, called for an investigation into the prince, saying: ‘It’s him claiming that he martyred the Taliban, but it may be civilians too. If England has a system and regulations, they should investigate and see whom he killed.

In the summer of 2021, the Taliban took control of Afghanistan with a lighting offensive that swept across the country in a matter of weeks

‘He is a so-called prince and should not freely walk after killing civilians. It is not acceptable. He has problems and is just climbing over whatever he can to stop himself and his country falling into sh*t.’

Molavi Nabi Jan, a Taliban official in the western Afghan city of Herat, said: ‘He’s a dirty idiot and a drunk jackal. He has destroyed all bridges behind him and is now just trying to avoid drowning in history.

‘Using the Taliban and his family is his last tool to make people talk about him. I know him very well. God left him on his own to give him a very big punishment at the end.’

An official in the southern Helmand province told MailOnline: ‘He’s evil. He’s made lots of Afghan women widows and lots of children orphans and he’s proud of that.’

Another Taliban official, Anas Haqqani, tweeted: ‘Mr. Harry! The ones you killed were not chess pieces, they were humans. They had families who were waiting for their return. Among the killers of Afghans, not many have your decency to reveal their conscience and confess to their war crimes.

‘The truth is what you’ve said. Our innocent people were chess pieces to your soldiers, military and political leaders. Still, you were defeated in that ‘game’ of white & black ‘squares’.

‘I don’t expect that the ICC [International Criminal Court] will summon you or the human rights activists will condemn you, because they are deaf and blind for you. But hopefully these atrocities will be remembered in the history of humanity.’

In the summer of 2021, the Taliban took control of Afghanistan with a lightning offensive that swept across the country in a matter of weeks, overthrowing the Western-backed government that was installed by the US, UK and their allies.

Leaders of the government fled the country as Western coalition forces pulled out, culminating in the collapse of the Afghan military and the Taliban capturing Kabul on August 15, 2021.

Despite promising a more progressive regime than when they were last in power in 2001, the Taliban have eroded the rights of women and minority groups in the country, most recently banning women from attending university – a move that drew fierce condemnation from the international community.