Prince Harry has fallen 45 points and Meghan Markle 36 points in an opinion poll of US voters in just over a month amid excitement over the release of Spare.

The couple, previously hugely popular in the US, have plummeted in the polls as Prince Harry launched a new assault on the royal family, revealing a host of intimate details including how he lost his virginity in his new memoir.

Spare became the fastest-selling non-fiction book of all time on its publication day earlier this month, topping sales charts around the world, including in the US, according to its publisher.

The new poll comes as Harry’s open revelations and accusations about members of his family, particularly his brother Prince William, have jeopardized the family’s chance of resolving their differences at Prince Charles III’s coronation later this year. 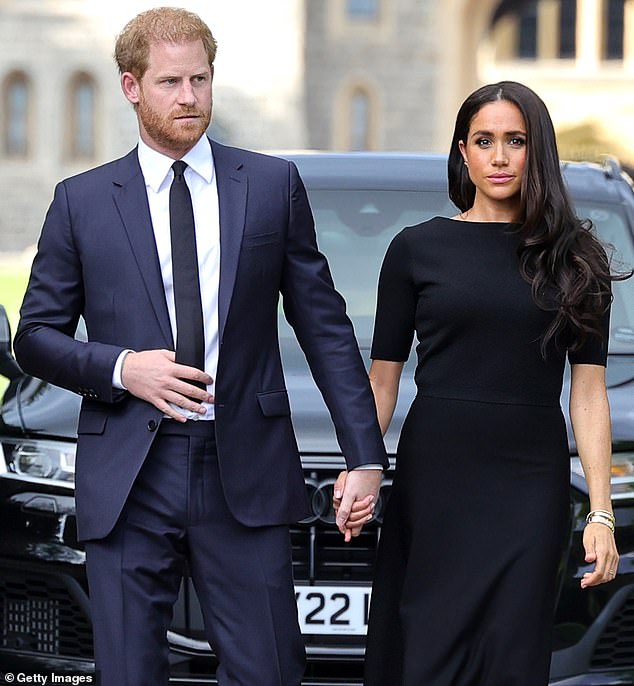 Prince Harry’s book, Spare, was released on January 10 and quickly became one of the best-selling non-fiction books of all time, but the impact of the Duke’s book appears to be still lingering

A new poll by Redfield & Wilton for Newsweek found that Prince Harry now has an approval rating of -7 on January 16, compared to +38 on December 5.

Meanwhile, Meghan Markle had an approval rating of -13, compared to +23 on December 5th.

The poll, which was attended by 2,000 US voters, marks a serious setback in ratings for the couple, who moved to the country after stepping down from royal duties in March 2020.

On Monday, Prince Harry was liked by 31 percent of respondents and disliked by 38 percent.

Meghan Markle was liked by 26 percent of respondents and disliked by 39 percent.

The poll also found that women like Ms. Markle slightly less than men.

The number is remarkable considering how much the couple has been in the news in recent months following the release of their Netflix documentaries Harry & Meghan and Harry’s new book.

The Redfield & Wilton survey also found that only a third of the population had not heard about the contents of the book.

It comes as the couple are becoming increasingly unpopular in the UK, with recent polls for MailOnline showing that 56 per cent of people believe they should lose all their royal titles and patronage.

The monarchy itself is also becoming less and less popular with young people.

The Redfield & Wilton Strategies poll, commissioned by MailOnline, also shows that Harry’s attacks on Charles, his brother William and sister-in-law Kate have not changed public perceptions of them at all. Kate’s polls have improved.

Prince Harry’s popularity with the British public has fallen to an all-time low, a YouGov poll showed last week

The Prince of Wales’ polls remain strong despite being accused of assaulting his younger sibling after a blazing row in which he called Meghan “difficult” and “abrasive”.

In the memoir, Prince Harry claimed his brother pushed him into a dog bowl during the heated row after he started dating Meghan, leaving him in “pieces”.

He claimed he could tell Prince William he wanted to hit him back, but he refused to do so. He added his brother later apologized.

He also revealed personal details of how he lost his virginity to a younger woman in a field behind a pub.

In his new book, Harry claims members of the royal household are regularly briefed on the press, including for negative articles about Meghan.

Harry has been criticized for having private conversations with and sharing intimate details about his family members.

However, the prince claimed there are many other details he doesn’t want to reveal because “I just don’t want the world to know,” adding that his family would “never forgive” him if he did .

Harry has since urged his family members to speak to him and apologize to Meghan, although it’s not clear for what.

It is understood there are hopes of peace talks between Prince Harry and his relatives ahead of his father’s coronation this summer.

https://www.dailymail.co.uk/news/article-11649671/Prince-Harry-drops-45-points-Meghan-Markle-36-points-month-poll.html?ns_mchannel=rss&ns_campaign=1490&ito=1490 Prince Harry loses 45 points and Meghan Markle 36 points in a month in a US poll

When does the Lunar New Year 2023 end in Pokémon GO?

Chris Ford, the first player to score a 3-pointer in the NBA, has died at the age of 74