The tributes paid to the late Princess Diana on the 25th anniversary of her death were spearheaded today by her brother Charles Spencer, who tweeted an emotional photo of a flag flying at half-mast at their Althorp ancestral home.

The Northumberland estate – where Diana met the Prince of Wales during a grouse hunt – was formerly owned by Diana’s father, Earl John Spencer, and is now the home of Charles, 9th Earl Spencer.

Diana’s death in 1997 shocked the world, and in the decades that followed, her influence was seen in causes supported by royals, her behavior and even her fashion choices.

And the Princess of Wales was also remembered today by fans who gathered outside her former London home, Kensington Palace, to pay tribute with a series of banners, photos and floral decorations pinned to the gates.

Among those in attendance was John Loughrey, who gained a reputation as Diana’s biggest fan after quitting his job in a kitchen to attend every court session of the official six-month inquest into her death from 2007-08. 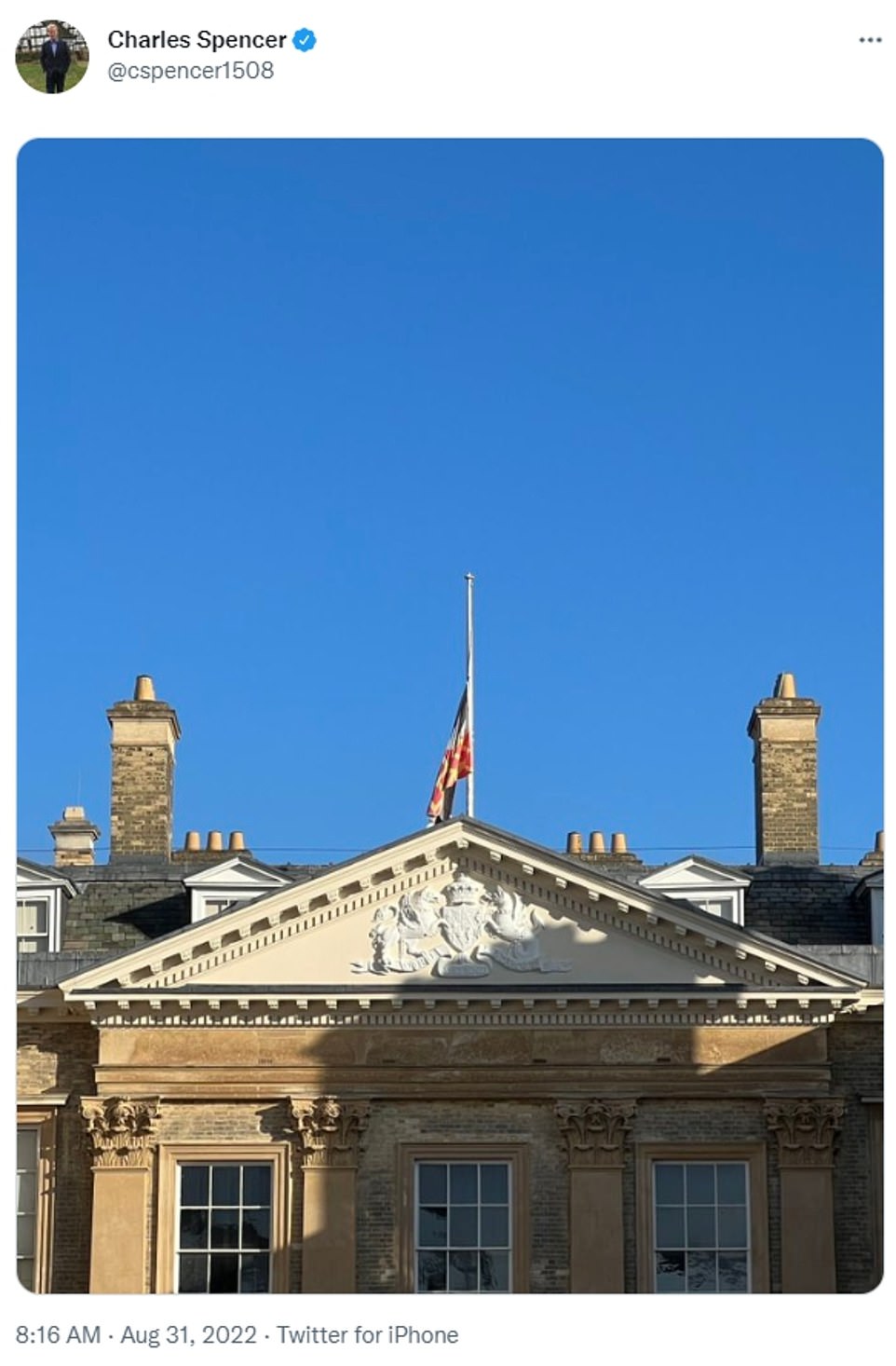 Flowers are laid outside the gates of Kensington Palace in London today, the former home of Diana, Princess of Wales

Royal fans outside Kensington Palace today commemorate Diana, Princess of Wales, on the 25th anniversary of her death

Among those in attendance at Kensington Palace today is John Loughrey, who has earned a reputation as Diana’s number one fan

Tessy Ojo, executive director of the Diana Award, which was created to promote the princess’ belief that young people have the power to change the world for the better, has paid tribute to the Queen and described delivering flowers at Kensington Palace left behind after Diana was killed in a car accident.

Ms Ojo said: “Her ability to connect with people through kindness and compassion is one of her most significant legacies. She shaped all of our lives.”

William and Harry “will pay their own private honors to Princess Diana rather than in public — or together.”

William and Harry will pay their respects privately to Princess Diana today, on the 25th anniversary of her death, rather than together in public.

Royal aides said a decision was made between the warring brothers, who previously marked anniversaries together – including last year when they unveiled a bronze statue of their mother in the sunken garden of their former home, Kensington Palace.

However, a source told the Daily Mirror that William “doesn’t plan” to make a public statement, adding: “He will no doubt spend the day reflecting on his mother’s incredible legacy and the work he continues to do every day ‘to promote it as he can.’

Meanwhile, Harry, who is embroiled in a row with the family after leaving with wife Meghan Markle to move to America in 2020, also paid tribute to her last week.

Speaking in Aspen, Colorado, he said of Diana’s anniversary, “I want it to be a day filled with memories of her incredible work and love for the way she did it. I want it to be a day when I can share my mother’s spirit with my family and children who I wish they could have met. Every day I hope to make her proud.”

She added: “Diana, Princess of Wales believed that young people had the power to change the world. Continuing your legacy also means building the capacity of young people to change their world by tackling the big issues of our time.

“Like Diana, Princess of Wales, they are not afraid to speak out and be at the forefront of change. I can only imagine how incredibly proud she would be of the tens of thousands of young people from around the world who are carrying on her legacy.”

When Diana died in an accident in Paris on August 31, 1997 at the age of 36, she began a new chapter in her life, freed from the constraints of being a member of the monarchy and intent on using her position to to devote her heart to the interests of the monarchy.

Her greatest legacy is through her sons, the Dukes of Cambridge and Sussex, who embody her beliefs and values ​​and have spoken about how their mother still guides them.

Last week, after a fundraising polo game for his charity Sentebale, named in memory of his mother, Harry said of the anniversary of her death: “I want it to be a day full of memories of her incredible work and her love for her kind made.

“I want it to be a day when I can share my mother’s spirit with my family and children who I wish could have met.

“Every day I hope to make her proud. She has been tireless in her work to support and destigmatize people living with HIV/AIDS. Fittingly, her favorite flowers were forget-me-nots.”

Diana has broken new ground by campaigning on issues like AIDS awareness – known to be holding the hand of a man with the disease – or highlighting homelessness and joining activists calling for a ban on landmines.

Her fashion sense made her a cover star for magazines and newspapers around the world and even after her split from the royal family she was still considered the modern face of the monarchy.

Diana’s sons paid tribute to their mother together last summer, on July 1, when they unveiled a statue of the princess in the garden of Kensington Palace. William and Harry were divided on many issues and formed a united front.

Flowers are left outside the gates of Kensington Palace, the former home of Diana, Princess of Wales, this morning

Flowers are left outside the gates of Kensington Palace, the former home of Diana, Princess of Wales, this morning

The princess gave a controversial interview to the BBC’s Panorama, in which she said: “Well, there were three of us in this marriage so it was a bit crowded” – a reference to Camilla Parker Bowles, who Charles later married.

The BBC vowed last month never to air the interview again after the Dyson Inquiry found journalist Martin Bashir had engaged in “fraudulent conduct” to secure the information.

He forged bank statements that he showed Diana’s brother Earl Spencer to gain access to the princess.

In separate statements, William and Harry condemned the BBC for their mother’s treatment, with William saying the interview fueled her “fear, paranoia and isolation” and Harry saying “the ripple effect of a culture of exploitation and unethical practices ultimately took over on her.” Life’.

Former tip worker, 65, who lived in shipping container for 30 years has been ordered to leave in six months