Crown Princess Mary is known for her impeccable royal style.

And the Hobart-born King, 50, did not disappoint at the Carlsberg Foundation research awards ceremony on Wednesday.

Mary stole the show when she looked every inch the style queen in a red lace dress at the ceremony in Copenhagen. 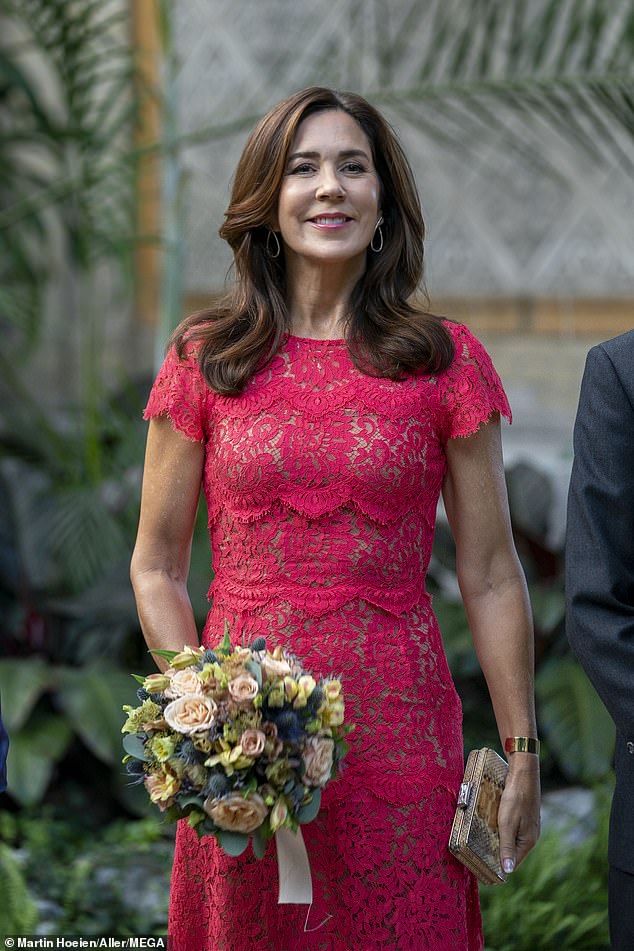 The royal paired the long dress with silver accessories, including a clutch bag and statement Mary Jane heels.

The star wore her brunette tresses in a swept wave and opted for minimal makeup that highlighted her natural beauty.

Mary carried a bouquet as she walked with other distinguished guests at the awards ceremony.

Each year the Carlsberg Foundation honors two of Denmark’s leading scholars with a research award with the presentation by Mary.

The ice core researcher and physicist Dorthe Dahl-Jensen and the semiotician and historian of ideas Frederik Stjernfelt were awarded the prizes this year.

Mary has been busy with her royal duties this month as she was spotted with local families during a visit to Greenland for the WWF World Nature Foundation last month.

The royal paired the long dress with silver accessories, including a clutch bag and statement Mary Jane heels

Mary met her husband Crown Prince Frederik of Denmark by chance at the Slip Inn in Sydney during the 2000 Olympics.

After they met, Fred – who was in Australia to support Denmark’s Olympic sailing team – asked Mary for her phone number and a romance blossomed.

“When we first met, we shook hands. I didn’t know he was the Prince of Denmark. Half an hour later someone came up to me and said, ‘Do you know who these people are?’ Mary revealed in an interview about meeting the heir to the Danish throne.

They maintained a long-distance relationship for a year, with Frederik making clandestine trips Down Under before Mary moved to Denmark in 2001 to study Danish at Studieskolen in Copenhagen.

In early 2003, Frederik’s mother, Queen Margrethe, publicly acknowledged the relationship and the couple announced their engagement at Amalienborg Palace later that year, on 8 October.

Frederik and Mary were married in Copenhagen Cathedral on May 14, 2004, with the newly crowned princess opting for a beautiful gown by Danish designer Uffer Frank and a veil first used by Crown Princess Margaret of Sweden in 1905.

Mary met her husband Crown Prince Frederik of Denmark by chance at the Slip Inn in Sydney during the 2000 Olympics. The couple married in 2004

Pictured: Tamani Crum's boyfriend who the NYPD was about to arrest when she was being beaten