It was widely expected that Ms Patel would lose her job to Attorney General Suella Braverman if Ms Truss became Prime Minister tomorrow and reshuffled the government.

But she made a pre-emptive strike tonight, announcing she would return to the backbenches when her successor is unveiled.

In a letter to Boris Johnson, she said it was “an honor and a privilege to serve” but she would not seek to stay.

She has been criticized for the scale of the Channel refugee crisis and Rwanda’s deportation scheme, which has yet to bring a single migrant to Africa.

“I congratulate Liz Truss on her election as our new leader and will support her as our new Prime Minister,” she said in her letter to Boris Johnson.

“It is my decision to continue my public service to the country and the Witham constituency from the back benches once Liz officially takes office and a new Home Secretary is appointed.” 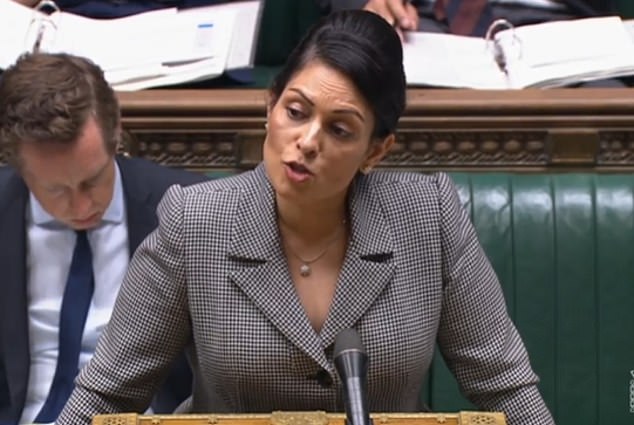 It was widely expected that Ms Patel would lose her job to Attorney General Suella Braverman if Ms Truss became Prime Minister tomorrow and reshuffled the government.

In a letter to Boris Johnson, she said it was “an honor and a privilege to serve” but she would not seek to stay.

Ms Patel has told friends she is not interested in taking another job and was expected to return to the backbenches if offered a demotion.

Reflecting on her own run for the top spot, she opted to remain neutral in the race to avoid splitting right-wing votes and hoped whoever succeeded Boris Johnson would keep her in office.

But it looked like she would be replaced by Suella Braverman after several years of failing to cope with migrants crossing the English Channel from France.

At the end of August, government figures showed that more than 25,000 migrants had crossed the English Channel to Britain so far this year. This means that 2022 is on track to be a record year for small boat crossings.

It has been more than four months since Ms Patel revealed plans to send migrants into Rwanda to try to stop people crossing the Channel.

This afternoon Ms Patel was accused of overseeing a rise in gun and knife crime as she defended her file.

As the Commons returned from the summer recess, Shadow Home Secretary Yvette Cooper claimed that “successive Conservative Home Secretary” was responsible for a “serious problem” with violent crime.

Ms Patel faced questions about the crime rate after several high-profile violent incidents over the summer, including the deaths of nine-year-old Olivia Pratt-Korbel in Liverpool and pensioner Thomas O’Halloran, 87, in London.

The Home Secretary said she was “proud” of her time at the Home Office, which has seen “some of the greatest reforms in the areas of security, migration and public safety”.

Paying tribute to the families of those involved in violent incidents in recent months, Ms Cooper said: “The number of stabbings is now 60% higher than in 2015, yet the number of violent criminals caught is at a record low.

“In this country there is a serious problem with gun crime, with gangs, with knife crime.

“Not my words, but those of the new Prime Minister. So why have successive Conservative home secretaries allowed it to get so bad?’

Ms Patel responded by accusing Labor of not supporting the Police, Crime, Sentencing and Courts Act, which she said “all the right deterrents are in place to prosecute criminals” while the Government uses police “at every single step of the way ‘supported’.

As the Home Office’s questions began, she had said: “Before I answer today’s questions and begin questions, I would like, if I may, to briefly address the last three years of Boris Johnson’s prime ministership, during which I have served as Home Secretary.

“This morning a written ministerial declaration was tabled on my behalf outlining the work of the Home Office, that department, over the last three years on our manifesto, and with it of course some of the biggest reforms in the areas of security, migration and public security, over which the announcer (Sir Lindsay Hoyle) just spoke.

“I am proud to serve in this government and I would like to thank the Prime Minister, past and present Home Office ministers and a host of officials.”

Ms Patel also told MPs the French were “friends” as she discussed tackling Channel crossings, just weeks after new Prime Minister Ms Truss said during the Tory leadership race the “jury is out” on whether President Emmanuel Macron is a “friend or foe”. to Great Britain.

The Home Secretary also defended the government’s Rwanda policy, telling the House of Commons: “This partnership is very clear in terms of standards, the treatment of people who are resettled in Rwanda, the resources deployed and also the processing as required of each applicant goes treated.’