Prosecutors looking to reopen the rape case against ’70s show star and Scientologist Danny Masterson have taken a hit after the death of Lisa Marie Presley.

Yesterday, Presley was pronounced dead at a Los Angeles hospital after suffering “complete cardiac arrest” at her home hours earlier. She was 54 years old.

Prosecutors say Masterson raped three women, all former Scientologists, at his Hollywood Hills home between 2001 and 2003.

Presley, a former Scientologist, was named as one of the prosecution’s key witnesses but was ultimately not called to the stand after the judge, Justice Charlaine Olmedo, restricted the scope of her possible testimony.

The judge declared a mistrial in the case due to a deadlocked jury in November. Just two days before Presley’s death, prosecutors announced their plan to hold a second trial against Masterson.

During the trial, prosecutors told the jury that Presley had been asked by the Church of Scientology to convince prosecutors of a Masterson not to report him to the police. 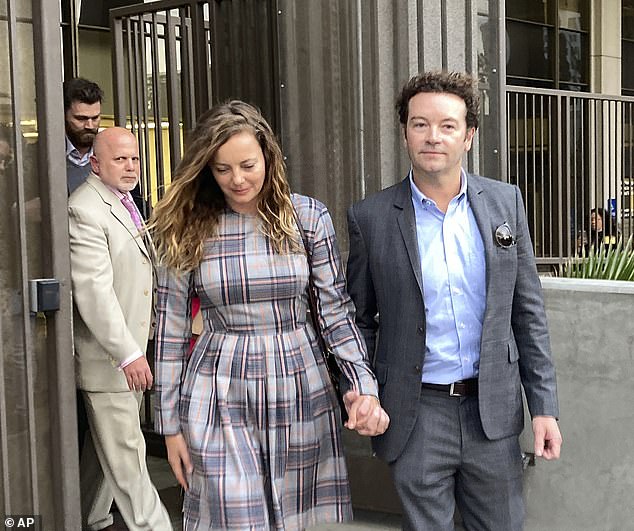 Prosecutors said Masterson, pictured with his wife Bijou Phillips, raped three women, all former Scientologists, at his Hollywood Hills home between 2001 and 2003

Presley, a former Scientologist, was named as one of the prosecution’s key witnesses but was ultimately not called to the stand after the judge, Justice Charlaine Olmedo, restricted the scope of her possible testimony

Judge Olmedo denied the motion to have Presley’s evidence excluded, but said that if Elvis’ daughter testified, she would limit her testimony to what she knows about alleged victim Jane Doe 1’s rape allegations and would not allow her to testify broadly to do about Scientology.

Prosecutors later said they decided not to ask Presley to testify.

Presley’s testimony – who reportedly left the Church of Scientology in 2014 – was intended to focus on her former friend Jane Doe 1, who says Masterson sexually assaulted her in September 2002 and raped her in April 2003.

Judge Olmedo declared a mistrial in the case in late November after the jury voted seven times in 24 hours without being able to reach consensus on any of the three charges.

Masterson’s attorney, Philip Cohen, said Scientology was mentioned 700 times during the trial, arguing that it was an excuse for prosecutors’ failure to build a credible case against the actor, a prominent member of the religion

Without a jury present, Assistant District Attorney Reinhold Mueller said during a hearing that Presley had told police that “a few months after April 2003 she was contacted by the Church of Scientology because she was a friend of Jane Doe 1 and had requested to be contacted by Jane Doe 1 and calm things down because at the time Jane Doe 1 was threatening to go to the authorities (to report Masterson) and the church wanted it handled internally.

‘She contacted Jane Doe 1 and reported to the Church of Scientology.’

Mueller told the court that Presley also admitted to police that years later – in December 2014 – she sent a message to Jane Doe 1 “apologizing for trying to silence her.” bring”.

He added that he believed the testimony Presley would give was “completely relevant to the jury.”

But Masterson’s attorney, Karen Goldstein, argued that most of Presley’s testimonies “revolve around obstruction of justice and that is why Masterson is not on trial here.

“None of their claims are relevant here. There is no reason Jane Doe 1 ever had a conversation with Miss Presley.”

Goldstein protested that although Presley had been listed as a potential witness at the trial since 2017, prosecutors only gave the defense a transcript of a new interview prosecutors conducted with her a few days before she was scheduled to appear.

In the new interview, Goldstein said, when asked if the Church of Scientology asked her to “smooth things out,” Presley replied, “I don’t remember.”

Goldstein called Presley’s statements “too vague to be helpful” and told the court she also said that “something happened that was outside of her comfort zone.”

“No details were offered,” she said, adding, “We completely rule out[Presley’s]testimony.”

Presley, who died January 12 at the age of 54 after suffering “complete cardiac arrest” at her home in Calabasas, was expected to testify that Scientology had asked her to pressure Masterson’s alleged victims

Presley and Lockwood, a session musician, were married for ten years between 2006 and 2016. Lockwood previously worked with Masterson’s wife Bijou Phillips, a singer

Goldstein complained to Judge Olmedo that the defense’s last-minute hearing of a new witness four weeks into her client’s trial denied her “due process and adequate notice.”

She called for prosecutors to be sanctioned for “disclosure violations” and said the defense didn’t have time to “find witnesses and attack their (Presley’s) credibility.”

DDA Mueller explained why Presley’s interview was conducted just days before she was scheduled to appear, telling the court that after she was called as a witness in the Masterson trial, she hired an attorney and “stated that she may have the 5th Amendment accepts. ‘

“We asked why that could be – maybe she was concerned about dissuading a witness.”

Mueller said he negotiated with Presley’s attorney and she agreed to do the interview, which was conducted last Friday.

Judge Olmedo ruled that the prosecution had committed no breach of evidence, noting that it was not uncommon for witness interviews to take place even during a trial.

In deciding to allow Presley to testify before the jury, the judge said her testimony was relevant, but only in relation to “Jane Doe 1’s decision-making process as to whether or not to go to the authorities.”

The judge added that testifying about Presley’s subsequent apology to Jane Doe 1 was beyond the scope of what she could say on the witness stand and she would not allow it.

In the aftermath of the trial, Masterson’s attorney, Philip Cohen, said Scientology was mentioned 700 times during the trial, arguing that this was an excuse for the prosecution’s failure to present a credible case against the actor, a prominent member of the religion. build up.

https://www.dailymail.co.uk/news/article-11630777/Prosecutors-Danny-Masterson-rape-case-dealt-blow-Lisa-Marie-Presleys-death.html?ns_mchannel=rss&ns_campaign=1490&ito=1490 Prosecutors in the Danny Masterson rape case struck a blow after the death of Lisa Marie Presley