The two home nations faced off for their final group stage game of the tournament, with both sides needing a positive result to secure their place in the knockout rounds.

With the goal-line scoreless at half-time and little else to discuss, pundits were quick to pick up a hilarious dive from Pickford just before the break. 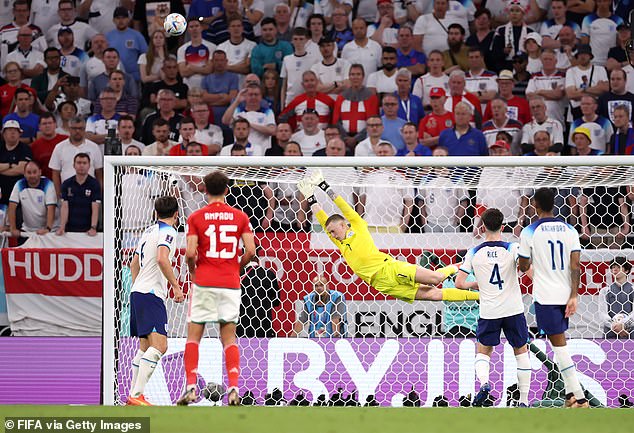 In the first half, Wales’ Joe Allen fired a long-range left-footed shot at goal that went over the bar.

It was a seemingly normal incident, although recurring featured England’s Pickford in a hilarious attempt to save the shot.

The Everton goalkeeper dived through the air with both arms fully raised as he flew over his goal – despite the ball sailing well over the bar.

Experts Gary Lineker and Alan Shearer had little else to discuss for the first 45 minutes, reveling in the hilarious attempt at a save.

In a speech on BBC Sport, Lineker jokingly claimed: “I think Jordan Pickford might have covered it, check that out…waheyyy!”

Shearer replied: “He didn’t have anything to do, did he?’

To which Lineker replied, “I don’t think I’ve ever seen a goaltender dive for balls miles away.”

The England goalkeeper conceded his second goal of the tournament after they managed to hold off Wales for 90 minutes.

England celebrated a stunning 3-0 win and secured their place in the next round of the tournament where they will meet Senegal.

After a goalless first half, the Three Lions got going in the second period, taking the lead five minutes after the break from a fatal Marcus Rashford free-kick.

They doubled their lead just minutes later when Phil Foden arrived at the back post to tap in following a Harry Kane cross.

Rashford doubled his tally for the night with a pounding finish that squirmed under Wales’ reserve goalkeeper Danny Ward.