The Queen said she was “deeply saddened” by the floods in Pakistan, which have killed more than 1,000 people and displaced tens of millions from their homes.

In a letter to the President of the Commonwealth country, signed this morning by Elizabeth R., the 96-year-old monarch, she declared Britain was in “solidarity” with Pakistan.

She wrote: “I am deeply saddened to hear of the tragic loss of life and destruction caused by the floods across Pakistan.

“My thoughts are with all those affected as well as those working in difficult circumstances to support recovery efforts. 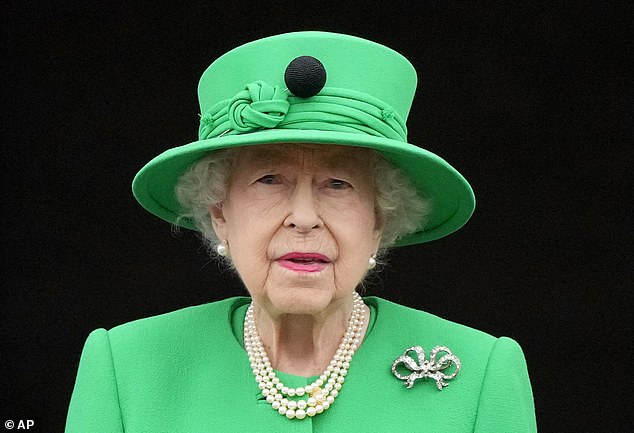 In a letter to the country’s President, the Queen said Britain was in “solidarity” with Pakistan in the face of the disastrous floods that have killed thousands

“The UK stands in solidarity with Pakistan as you recover from these horrific events.”

The Queen has visited Pakistan twice during her reign, in 1961 and 1997. Both times she was accompanied by Prince Philip.

Her moving message came as Pakistan’s foreign minister said the catastrophic floods were “a disaster on a scale I have never seen.”

She is currently staying at her home in Balmoral, Scotland, where the next British Prime Minister is expected to visit to be sworn in.

Horrifying satellite images showed the sheer extent of the destruction in Rajanpur, Pakistan, as entire villages went under water

The death toll in Pakistan rose to over 1,000 today and an area the size of Britain was at risk of being submerged.

Tens of millions of Pakistanis have been forced to flee their homes as entire villages have disappeared, with dramatic footage capturing hotel collapses, helicopter rescues and narrow escapes.

Prince Charles, released via a series of tweets in the afternoon, also sent his support to the people of Pakistan.

The Prince of Wales said: “My wife and I are deeply saddened by the devastation caused by the recent floods in Pakistan. Our hearts go out to all the victims and their families, and to the millions of people who have lost property and livelihoods.

“Your country is very special to us, with deep and enduring ties to the UK.

We would like to give our special appreciation to the Government of Pakistan, the military and emergency services, the countless volunteers and charities who work tirelessly to save lives and assist those in need.

“Times like these remind us of the fragility of our planet and the urgent need for humanity to live in harmony with nature. Our prayers are with all our friends in Pakistan.”

Foreign Minister Bilawal Bhutto Zardari said this morning from his home in flood-stricken Sindh province in south-east Pakistan: “All around me is water, water and more water. There isn’t much dry land to be found.

“We experienced a devastating monsoon [with] Floods from the sky that have lasted since the end of June.

“It’s a disaster on a scale I’ve never seen before,” he told the BBC.

More than 20 of the 30 districts in the affected province, home to nearly 48 million people, have been declared “disaster struck,” he added.

And 33 million households have been displaced or affected by the environmental disaster – far more than the 20 million people who were forced to move during the 1947 partition, Mr Zardari said.

He added: “We’ve had floods and monsoons before, but it’s really engulfed us all.”

The death toll hit 1,061 this morning, including 28 deaths in the past 24 hours, the National Disaster Management Authority said. They said 119 died on Saturday.

Ms Rehman added: “We could well have a quarter or a third of Pakistan under water”.

Prime Minister Shahbaz Sharif also blamed “the horrors of climate change” in a tweet over the weekend.

But while politicians are eager to blame environmental changes for the sheer scale of the destruction and displacement, local residents cite lax building laws and government corruption.

Local governments allowed developers to build hotels on the banks of the Kunhar River, cutting off natural river routes and diverting floodwaters directly to villages.

A resident of Kaghan market told the BBC: “These hotels and markets were blocking the natural waterways and so we are seeing much greater losses from the flooding that could easily have been avoided.”

Desperate residents in Hyderabad, southern Pakistan, are rushing to get emergency supplies for the army after flash floods

An incredible video, captured from afar, shows a Pakistan Army helicopter crouching just above the raging tide to rescue stranded people trapped on a rock above the water’s surface. The army said they rescued 22 people yesterday alone

Flash floods from the heavy rains washed away villages and crops as soldiers and rescue workers evacuated stranded residents to the safety of relief camps. Displaced people are pictured at one such place in Khyber Pakhtunkhwa today

Flash floods from the torrential rains washed away villages and crops as soldiers and rescue workers evacuated stranded residents to the safety of relief camps and brought food to thousands of displaced Pakistanis.

The footage showed a daring helicopter rescue carried out by the army to save stranded people from what appeared to be certain death.

The Office for the Coordination of Humanitarian Affairs, the United Nations disaster agency, said 184,000 people had been confirmed as displaced – a number expected to rise in the coming days.

https://www.dailymail.co.uk/news/article-11156477/Queen-says-deeply-saddened-Pakistan-floods-UK-stands-solidarity-recover.html?ns_mchannel=rss&ns_campaign=1490&ito=1490 Queen says she is “deeply saddened” by the floods in Pakistan and Britain “stands in solidarity as you recover”.