RAF drones have blown up nearly 1,500 Islamic State fighters in hundreds of missions over Iraq and Syria over the past eight years

By Elena Salvoni For Mailonline

British drones have killed or injured nearly 1,500 IS fighters in Iraq and Syria since 2014, today’s figures show.

The RAF’s MQ-9 Reaper aircraft have flown 4,857 sorties in the region over the last eight years.

This resulted in an estimated 1,413 enemy targets being hit, according to a freedom of information request issued by The Sun on Sunday. 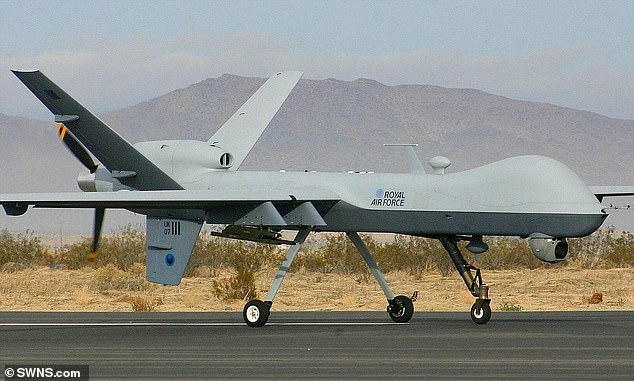 The RAF’s MQ-9 Reaper aircraft, pictured here during training in Nevada, has flown 4,857 missions over the region over the past eight years

The aircraft are armed with 500-pound laser-guided bombs and Hellfire air-to-surface missiles.

Piloted by crews from RAF Waddington in Lincolnshire and across the US, the MQ-9s are unmanned aerial vehicles that have flown hundreds of missions over the region since 2014.

The numbers are estimates by experts studying drone mission reports and aerial photographs of the debris.

The number of enemies hit in Iraq has fallen significantly from a peak of 476 in 2016 – a year in which ISIS was considered the world’s deadliest militant organization.

According to the United Nations, there are still around 10,000 IS fighters in Iraq and Syria.

The Iraqi government declared victory over IS in 2019 after three years of fighting.

The militant group continues to carry out terrorist attacks in both countries and around the world.

In a 2015 attack on Raqqa, Syria, British forces killed Reyaad Khan, a 21-year-old from Cardiff who was featured in ISIS recruitment campaign video.

The attack was a joint operation with the US and killed two other British militants, Ruhul Amin, 26, and Junaid Hussain, 21.

In 2015, British forces killed Reyaad Khan (left), a 21-year-old from Cardiff who was featured in ISIS recruitment campaign video (pictured).

Another prominent Briton in the ISIS terror group, known as Jihadi John, was killed in Syria the same year.

The 27-year-old terrorist, whose real name was Mohammed Emwazi, beheaded prisoners in videos released by IS in 2014 and 2015.

Sally Jones, known as The White Widow after leaving her home in Kent to join ISIS, was killed in a strike in 2017.

Sally Jones (pictured), who was known as The White Widow after leaving her home in Kent to join ISIS, was killed in a strike in Raqqa in 2017

New “Protector” drones are due to enter service in 2024, with the first delivery to the RAF next year.

Visiting RAF Waddington in Lincolnshire last year, where the drone fleet will soon be based, Defense Secretary Ben Wallace said Protector aircraft could be deployed in Afghanistan if the Taliban allow terrorists to operate there.

Mr Wallace also said during the visit that he feared the “reservoir” of potential extremists is likely larger than it was before the 9/11 attacks.

https://www.dailymail.co.uk/news/article-11178369/RAF-drones-blast-nearly-1-500-Islamic-State-fighters-Iraq-Syria-past-eight-years.html?ns_mchannel=rss&ns_campaign=1490&ito=1490 RAF drones have attacked nearly 1,500 Islamic State fighters in Iraq and Syria over the past eight years