Rail workers are set to strike again this month amid longstanding disputes over wages, jobs and working conditions.

The Rail, Maritime and Transport Union (RMT) announced today that it would go on strike on September 15th and 17th.

Over 40,000 Network Rail RMT members and 14 rail companies will pull out as part of the strike action.

Union leaders say the strikes will “effectively shut down the rail network”.

It comes after the TSSA union announced that members of nine rail companies will take part in a 24-hour strike starting midday on September 26.

On Wednesday, the Aslef union confirmed that train drivers at 12 rail companies will go on strike on September 15th.

RMT General Secretary Mick Lynch said: “Our members have no choice but to continue this strike action. 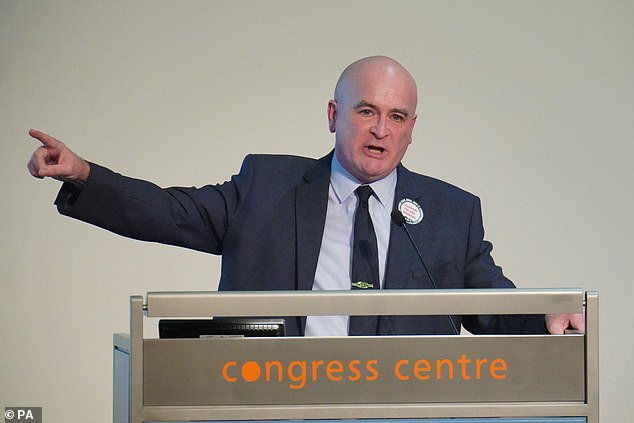 The RMT announced today that they will hold a walkout on September 15th and 17th. Pictured: Mick Lynch, Secretary General of the Rail, Maritime and Transport Union (RMT)

What strikes will take place in September?

Strikes or votes for industrial action are announced practically every day as workers across the UK join the growing campaign for wage increases to cope with rising inflation amid the cost of living crisis.

Unions have described it as a “summer of solidarity” amid deteriorating industrial relations and allegations from union officials that the government is doing little or nothing to help workers struggling with mounting bills.

Here are some of the upcoming strikes and potential disputes stretching into the fall:

“In the past few weeks, Network Rail and the EVU have shown little interest in offering our members anything new in order to reach a negotiated solution.

“Grant Shapps continues his dereliction of duty by staying in his bunker and preventing the rail industry from making a deal with us.

“We will continue to negotiate in good faith, but employers and the government must understand that our industrial campaign will continue as long as it lasts.”

Negotiations between the union and the railway industry are ongoing, but there has been no breakthrough or new offers from either Network Rail or the railway companies in the national rail dispute.

Earlier this week, train drivers’ union Aslef said its members will exit Thursday September 15 at 12 railway companies in a wage dispute that has already sparked two other industrial disputes in the last five weeks.

In addition, members of the Transport Salaried Staffs Association (TSSA) from nine railway companies as well as Network Rail will depart from Monday 26 September until the same time the following day.

The TSSA strike coincides with the Labor Party conference in Liverpool. A Labor-affiliated union, the TSSA said it would seek support from delegates and MPs to join them on pickets – but Sir Keir Starmer will not join the striking workers and today insisted he should instead focus on the formation of the next government will focus .

TSSA said it was still in talks with Network Rail over the possibility of an agreement to avert industrial action, but was urging Transport Secretary Grant Shapps to step in to break the deadlock.

It followed seven previous rail strikes in recent months by Aslef, the TSSA and the Rail, Maritime and Transport Union (RMT) which have caused chaos for commuters and those traveling across the UK for events and summer holidays.

The chairman of the TSSA, Manuel Cortes, has written to both Mr Shapps and the bosses of the railway companies held by the Ministry of Transport in recent days. He wants the government to allow operators to “return to the negotiating table with a revised deal that improves on the insulting 2 per cent offer that was rejected earlier in the summer”.

“Frankly, he’s either sitting at the negotiating table with our union or getting out of the way so rail bosses are free to negotiate with us, as they have in the past.

“The reason for the current impasse is right at Shapps’ doorstep and passengers are paying a heavy price for his incompetence and intransigence.

“I welcome the fact that negotiations are ongoing with Network Rail and the distance to a solution is closing. Time will tell if an agreement can be reached to avert our next strike.

“I will be on our picket line in Liverpool and encourage other delegates and Labor MPs to do the same so they can rightfully show they stand shoulder to shoulder with those fighting the Tories’ cost-of-living crisis.”

“I understand how much they are struggling – wages have been stagnant for almost 10 years, we now have a cost of living crisis so prices are going up.”

When asked if he would join the TSSA workers on the picket line, he said: “No. I want a Labor government, I want to be Labor Prime Minister. You can’t sit at the cabinet table and solve problems and then go on a picket line, those are different jobs.

Meanwhile, Aslef’s general secretary Mick Whelan said today as his union announced the new strikes: “We regret that passengers will again be inconvenienced.

“We don’t want to go on strike – having our workers withdrawn, while a basic human right, is always a last resort for a union – but the rail companies have forced us into action.

“They want train drivers to take a real pay cut – to work just as hard this year as they did last year, but for 10 per cent less.

“Because inflation is now in double digits and going up – much higher according to some forecasts – and the rail companies haven’t offered us anything.