Republicans are weighing their options to prevent Joe Biden’s student debt relief plan from taking effect, including a series of lawsuits against the president.

Republican attorneys general — from states like Arizona, Missouri and Texas — have met privately to discuss a strategy that could result in multiple cases being filed in different courts across the country, the Washington Post reported.

And conservative groups like the Heritage Foundation and the Job Creators Network are also weighing options.

However, no lawsuits have yet been filed as lawyers weigh the best way to combat Biden’s use of executive power to pay off millions owed to the federal government.

“We are actively seeking legal options to stop the Biden administration’s abuse of power and attacks on working-class Americans,” Missouri Attorney General Eric Schmitt, who is running for the Senate, told Fox News Digital. 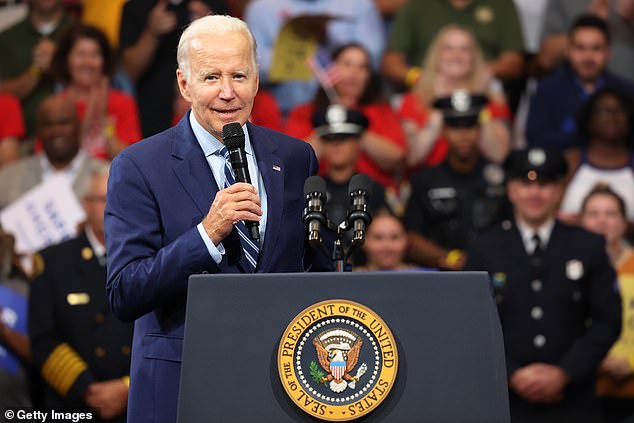 Republicans are weighing their options to prevent Joe Biden’s student debt relief plan from taking effect, including a series of lawsuits against the president

Some Attorneys General are weighing lawsuits: “We are actively exploring legal options to stop the Biden administration’s abuse of power and attacks on working-class Americans,” said Missouri Attorney General Eric Schmitt (above).

The Job Creators Network, founded by Republican donor Bernie Marcus, said it was building a legal team and working with advisers on a lawsuit.

“This is a bailout enacted by executive incursion, similar to the illegal employer vaccination order and moratorium on evictions struck down by the Supreme Court,” Alfredo Ortiz, the group’s president, told Fox News. “Like these examples of Biden’s regulatory state, this action should be challenged in court.”

The difficulty may be figuring out who has the legal “standing” to challenge Biden’s decision in court.

The Supreme Court has already ruled that taxpayers do not have the right to sue the government, meaning an individual cannot sue the matter.

Borrowers who have already paid off their loans — and therefore don’t qualify for the handout — are also likely not eligible.

And state governments are considered incapable of acting because student debt relief doesn’t strain their finances or authority since it’s a federal program.

Courts are unlikely to consider the average taxpayer entitled to file a lawsuit.

One of the chambers of Congress could try to sue the administration, arguing that Biden’s decision affects Congress’s power over the nation’s finances. But for that to happen, Republicans would need to gain control of the House or Senate in November’s election.

Republican Senator Ted Cruz of Texas, one of the biggest critics of Biden’s decision to forgive some student debt, said in a radio interview Wednesday it was unclear who could sue.

He said a current college student could file a lawsuit, arguing that debt relief could induce colleges to increase tuition, unfairly exposing students to higher fees.

“The difficulty here is finding a plaintiff that the courts will conclude has merit,” Cruz said. “That could prove to be a real challenge.”

Biden announced last week that his administration would make $10,000 in student loans to individuals earning less than $125,000 and joint applicants earning a combined income of $250,000. Pell Grant borrowers would receive $20,000 in forgiveness.

The Federal Budget Committee estimates the decision could cost US taxpayers around $500 billion or more over the next decade.

Lawsuits are the only way to stop executive action.

Republican Senator Ted Cruz of Texas, one of the biggest critics of Biden’s decision to forgive some student debt, said in a radio interview Wednesday it was unclear who could sue

Biden announced his student-loan forgiveness plans via Twitter on Wednesday, hours before his comments moved. It includes $10,000 or $20,000 in loan relief, depending on Pell Grant status, for individuals earning less than $125,000 and for joint applicants earning less than $250,000

Republicans have argued Biden does not have the legal authority to pay off a person’s debt.

“This is an illegal act by a president desperate for political victory,” a group of GOP lawmakers said last week.

The White House argues it can waive or change loan balances under the HEROES Act of 2003.

The law, passed after the September 11 terrorist attacks, allows the Secretary of Education to waive or modify student financial aid programs in times of war or national emergencies.

The government argues that the Covid pandemic qualifies as a national emergency.

“Legal authority gives the minister the ability to ensure that the pandemic and emergency does not cause net financial damage to these people,” Bharat Ramamurti, the deputy director of the National Economic Council, said during a recent White House news briefing.

And the Justice Department wrote a 25-page memo justifying the debt cancellation.

The HEROES Act “authorizes the Secretary of Education to reduce or eliminate the obligation to repay the principal amount of federal student loan debt, including on a class-wide basis, in response to the COVID-19 pandemic, provided all other requirements of the Act are satisfied,” wrote Deputy Attorney General Christopher Schroeder.

An Australian bouncer knocks a US Marine unconscious in Darwin