By Brett Lackey for Daily Mail Australia and NCA NewsWire

A diner has asked why he was charged over $10 for a bottle of still water at one of Sydney’s most exclusive restaurants.

The Reddit user explained that he decided to “spend some money” and have “a nice dinner for a special occasion” at Chef Matt Moran’s Aria.

The venue is an expensive waterfront restaurant on the city’s Circular Quay, overlooking the Sydney Opera House and Harbor Bridge

The bill totaled $455, but user EstebanJulioRamirez asked the price of one of the items ordered. 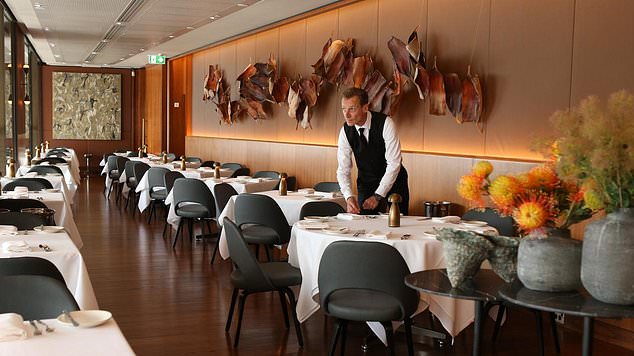 “We don’t really go to these high-end restaurants that often,” they said in a post on the Sydney Reddit page.

Considering the cost of $195 per person for the four course meal, the guest wanted to know if the fee for the water was up to standard.

“I can understand the fee for soda, but is it normal to charge $10.50 for still water in restaurants at this price?”

The receipt shows that a bottle of sparkling water is also $10.50.

The Reddit user asked why he was being charged $10.50 for still water while paying $195 per person for a four-course meal

Other Reddit users also jumped in to point out that upscale restaurants regularly charge that much for bottled still water.

“Unfortunately, good restaurants will always ask you if you want still or sparkling water,” said one user.

“Always ask for tap water (unless you want to pay for still/fizzy water).”

Another advised, “Since the receipt says it was bottled, I’m assuming it was fancy imported water served in a glass bottle.”

“I burned myself on it once, when they asked if it was bubbly or still I assumed that was free. I now know how to ask for a tap.”