Rishi Sunak has been accused of behaving like an “A-list celebrity” today as he appeared to use the RAF to fly 250 miles to northern England to promote government aid to deprived areas.

A posh Air Force jet reserved for VIPs flew this morning from RAF Northolt in north-west London to Blackpool, the closest airport to Morecambe, where the Prime Minister is expected to speak later.

No10 declined to discuss his travel plans over security concerns but if confirmed it would be his third deployment of an RAF aircraft in the past 10 days to parts of the UK with long distance train services to London.

He flew to Edinburgh to see Nicola Sturgeon and Leeds to visit an NHS unit for a photocall last week.

Today’s 41-minute journey would allow him to avoid the Abellio West Coast Mainline train service, which has drawn much criticism in recent months for its terrible performance and punctuality. An 8.30am train from Euston could get him to Morecambe at 10.25am if running on time.

Labor attacked airfare at a time when ordinary families are under financial pressure from rising bills. 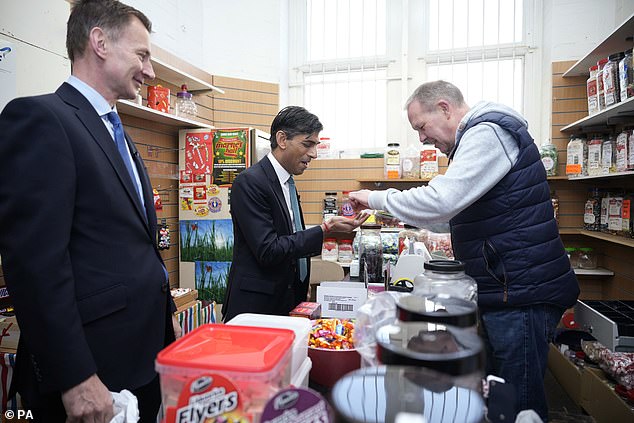 A posh Air Force jet reserved for VIPs flew this morning from RAF Northolt in north-west London to Blackpool, the closest airport to Morecambe, where the Prime Minister is expected to speak later.

A Labor spokeswoman said: “Rishi Sunak is no longer even trying to hide these ruthlessly expensive habits.

“Jetting across the country on taxpayers’ money like an A-list celebrity instead of catching a train like the rest of us is just absurd.”

The Ministerial Code states that ministers “should ensure that they always make efficient and cost-effective travel arrangements”.

It adds: “Only cabinet members and ministers in charge of departments have the discretion to authorize special flights either for themselves or other ministers in their departments.

“Unscheduled flights may be authorized when scheduled service is not available or when air travel is essential but the exigencies of official or parliamentary business or security considerations preclude the journey being made on a scheduled service.”

Mr Sunak’s Government was forced on the defensive today as it came under fire from Tory MPs in Red Wall seats who claimed the £2.1billion Leveling Up Fund was targeting wealthy areas in the South East aligned.

Michael Gove insisted the pot of recovery money was “leaning heavily northwards” amid claims that areas that first voted Tory in 2019 were missing out.

But only half of the successful offers are in the UK’s 100 most deprived areas. The wealthy Prime Minister’s constituency in Richmond, Yorkshire, is getting £19m in funding, with the money going to the Catterick Garrison, where many British Army units are based, to help revitalize the city centre.

A Tory MP told the Times: “People are apoplectic. There are some really affluent areas on the list. It looks awful. It went down terribly among the Red Wall deputies.’

He told BBC Radio 4’s Today programme: “Well, that’s not entirely true. If you look at it in terms of funds made available per person, it’s the North West, the North East, Wales that comes out on top.

No10 has previously defended the Prime Minister’s use of RAF aircraft rather than scheduled train services or his minister’s car, saying there was “great time pressure”.

Mr Sunak’s Government was forced on the defensive today as it came under fire from Tory MPs in Red Wall seats who claimed the £2.1billion Leveling Up Fund was targeting wealthy areas in the South East aligned.

Pictures were posted online last week of him boarding the French-made Envoy executive jet, which can carry 14 people in front of a saluting soldier, before flying to Leeds.

He is the latest minister to face questions about using official government planes for trips that could be made using cheaper – albeit slower – modes of transport.

Last November, at the height of the canal boat crisis, Home Secretary Suella Braverman used an RAF Chinook helicopter to travel 30 miles from Dover to the Manston migrant camp.

She was spotted wearing a Top Gun-style pilot’s helmet while exiting the plane. Sources close to the Home Secretary said it was so she could “see the breadth of the coast” that Border Force officers must monitor as thousands continue to arrive in Britain from across the Channel.

https://www.dailymail.co.uk/news/article-11653009/Rishi-Sunak-accused-behaving-like-list-celebrity-uses-posh-RAF-jet-again.html?ns_mchannel=rss&ns_campaign=1490&ito=1490 Rishi Sunak has been accused of acting like an “A-list celebrity” as he returns to using a posh RAF jet