Hollywood legend Rita Moreno revealed this week, shocked and saddened that she doesn’t have “many friends” and certainly not in Hollywood, after being betrayed and hurt by women too many times.

Moreno, 91, made the sad confession in an interview with CBS. She was promoting her new project 80 for Brady – a film about four true Tom Brady fanatics who are all women over 80.

Moreno stars in the film alongside Jane Fonda, Lily Tomlin and Sally Field, who also attended the session. 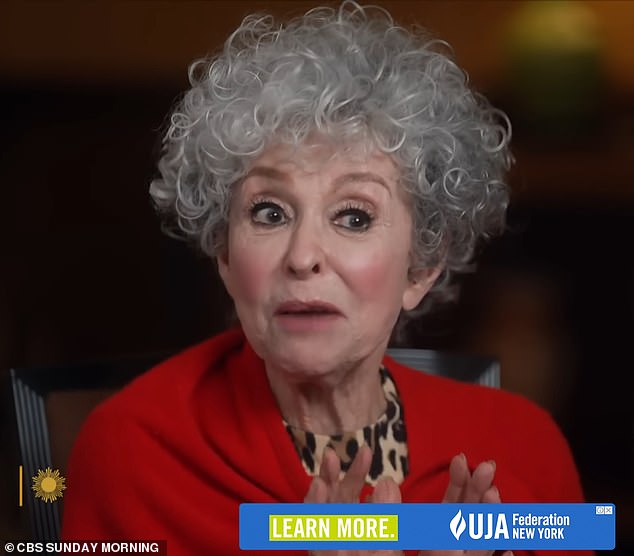 Moreno, 91, made the sad confession in an interview with CBS. She was promoting her new project, 80 for Brady.

Moreno was interviewed along with Sally Field, Lily Tomlin and Jane Fonda, who were all shocked by their comments

“I don’t trust them. I’ve been betrayed so many times by them and by my stupid insistence on believing in people who really haven’t been very nice to me,’ Moreno said matter-of-factly.

Her comments silenced the room for a moment before Tomlin said dejectedly, “I’m sorry Rita.”

Fonda vowed more firmly: “We will do something about it. We’re going to show you that here are three women you can trust.

She replied, “The thing is, I trust you.”

It was a touching moment between four Hollywood icons, but the interviewer – and viewers – were left in shock.

Moreno didn’t go into detail about who hurt her.

She burst onto the screen in 1952 with her stunning performance as Zelda Zanders in Singing In The Rain. Next came her adorable performance in The King and I.

Moreno on the set of Singing In The Rain in 1952. It was her first Hollywood film after being cast by Gene Kelly

Moreno as Anita in West Side Story in 1961. She won an Oscar for the role and became a household name

Marlon Brando and Rita Moreno visit the set of the 1954 film ‘Desiree’. She had an affair with Brando and became pregnant by him, but was heartbroken when he left her for another actress

Moreno with her Oscar for playing Anita in West Side Story

Moreno married cardiologist Leonard Gordon in 1965 and they welcomed their daughter Fernanda Luisa Gordon two years later. The family is pictured in 1982

Moreno with President Obama won the 2010 National Medal of Arts

She is best known for her role as Anita in 1961’s West Side Story.

In this role, Moreno sang, danced and acted to an Oscar with her portrayal of the energetic, spirited Anita alongside Nathalie Wood’s sweet, gentle Maria.

In the years that followed, she starred alongside Marlon Brando and James Garner.

She went on to make television series and is one of the few actresses in history to have won an EGOT – Emmy, Grammy, Oscar and a Tony, having also acted on Broadway.

Moreno suffered heartache and even attempted suicide during her turbulent relationship with Marlon Brando.

She wrote in her recent memoir how she had become pregnant by him during their 1950s romance and how he paid for a failed abortion that caused her to bleed “for days”.

In 1965 she married cardiologist Leonard Gordon.

The couple remained together until his death in 2010 and had one daughter together.

Moreno, 91, made the sad confession in an interview with CBS. She was promoting her new project 80 for Brady – a film about four true Tom Brady fanatics who are all women over 80

https://www.dailymail.co.uk/news/article-11641507/Rita-Moreno-says-doesnt-friends-betrayed-women-Hollywood.html?ns_mchannel=rss&ns_campaign=1490&ito=1490 Rita Moreno says she doesn’t have “many friends” after being “betrayed” by women in Hollywood

When does Warzone 2 season 1 end?